Today we’re going to take a look at the story behind the stats on a very unique gold enhancement from the book of Joshua!

To briefly set up our story, Joshua and Israel just learned a hard lesson. They failed their attempt to take the city of Ai because of Sin in the Camp. Find out more by reading my devotional about that story here.

Jericho had already been such a unique battle. Marching for days, sounding of trumpets, and finally the divine demolition of Jericho’s walls. Israel’s first attack on Ai had been simple and direct, yet without God guiding them they failed miserably. Now with the Lord leading them another strategy would come into play. 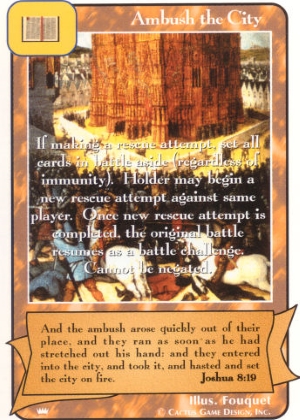 What a unique card! Your first rescue is suspended and you get a brand new start! Your choose a new rescuer and your opponent, tipped off balance, scrambles to come up with a “plan B” block. I remember when this card was released. I was so excited to have another powerful option around powerhouse evil characters like Prince of this World and Red Dragon. Why does it do what it does? Let’s take a look!

“Then the Lord said to Joshua, “Do not be afraid; do not be discouraged. Take the whole army with you, and go up and attack Ai. For I have delivered into your hands the king of Ai, his people, his city and his land. You shall do to Ai and its king as you did to Jericho and its king, except that you may carry off their plunder and livestock for yourselves. Set an ambush behind the city.” – Joshua 8:1-2

As they prepared for battle, Joshua set 5,000 of his 30,000 men in an ambush west of the city (take a look, this story has inspired more than one unique special ability!). When the main army marched toward Ai, the proud and puffed up Canaanite soldiers were ready to rain down the pain on the Israelites one more time! But they didn’t know that with Israel’s sin forgiven and their God fighting for them that the battle would end much differently that day.

In Redemption, when we choose our blockers we put up either the best strategic option we have or the most powerful block available. Your opponent just went on a drawing spree with Philemon? Foreign Wives for the win! He’s attacking with The Strong Angel for an arm wrestling contest? Emperor Claudius will be glad to pull up a chair. Blocking players generally have the advantage of knowing what they’re up against on the table. Just like the king of Ai knew what he was up against when he proudly sent every single soldier out of every station and village to fight Israel.

As planned, Israel allowed themselves to be driven back far away from the city.

“Then the Lord said to Joshua, “Hold out toward Ai the javelin that is in your hand, for into your hand I will deliver the city.” So Joshua held out toward the city the javelin that was in his hand. As soon as he did this, the men in the ambush rose quickly from their position and rushed forward. They entered the city and captured it and quickly set it on fire.” – Joshua 8:18-19

As Joshua Burns the City the morale of Ai’s army is broken. The battle they are winning is no longer the one that matters. Even a victory in this battle would be shallow. With no place to call home these Canaanites would lose the battle on all fronts.

Ambush the City is not a straight forward special ability. God’s plans are seldom cut and dry. The Author of Salvation crafts landscapes beyond our imagination in the story, His story, of life. Next time life takes a turn you weren’t expecting don’t forget that your story isn’t over yet. His pen hasn’t left the page. He has never left your side. God is writing a story for His glory and for your good.

And your story may just be that surprise that no one saw coming!

Joey received his first Redemption cards in 1996 when his grandmother bought an A/B starter set for Joey and his cousin to split. He has been hooked ever since. Joey also had the privilege of teaching redemption as part of an after school gamers club where he would share the gospel with good friend Zac Cornell (National T1 Champion 2014). Joey has led playgroups in Des Moines (IA), Leon (IA), Moberly (MO), and Braymer (MO) where he has been youth minister since 2008. Although Joey enjoys playing the game, his greatest joy has always come from teaching new players and using Redemption to share the hope of Jesus Christ. View all posts by Joey here...