While Prophecies of Christ is primarily focused on how the Old Testament foreshadows the coming Messiah, it’s interesting to see how God’s plan was opposed many, many times by people and evil spiritual forces – always in vain.

One form of opposition in both the Old and New Testament are leaders who misled God’s people for their own benefit and gain. They tricked the people by “tickling their ears” with false information. Often, they were leaders such as priests and prophets whose words should carry some weight.

In phase 1, we saw False Prophets (the grey curse bearer) and Prophets of Samaria kick off the “evil prophets” mini-theme we’re enhancing this year. There’s a smattering of evil prophets from older sets, most notably Balaam, Damsel with Spirit of Divination and The False Prophet from Revelation (Prophets, Early Church and Revelation of John). But this group of characters is hardly anything to build a defense around. Until phase 2…

In Ezekiel 17, the prophet condemns a group of women for a number of atrocious acts committed against the people. We’ve translated these wicked women into a card that’s a rather formidable defender. 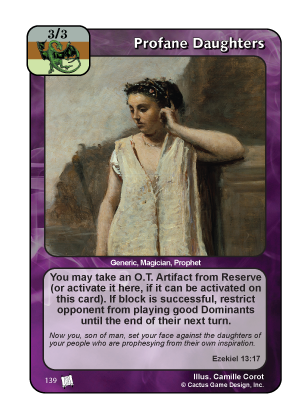 Being associated with “magic bands” (Ezekiel 13:18), the original design of this card interacted specifically with Magic Charms. But rather than use such a narrow focus on a card that isn’t even on the new card face, we diversified the ability to work with any O.T. artifact. That opens up possibilities for cards like Magicians’ Staves and even a possible future “Magic Bands” card if we decide to print such a thing.

These false prophets will also temporarily deceive you into not playing your good Dominants if they succeed in battle. If you’ve faced phase 1 cards like Potiphar’s Wife or Kinsman Redeemer, you’re familiar with the type of impact that can have on a game!

Earlier in the same passage of scripture, the prophet Ezekiel condemns the male false prophets who are leading Israel astray. We chose to represent their deceit by reprinting an old card as a new niche Dominant. 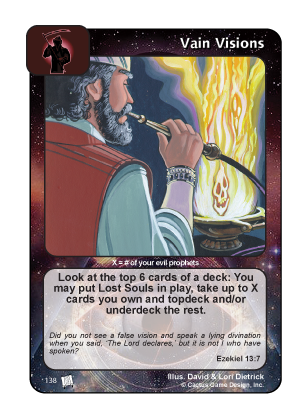 At worst, this acts like a more versatile Divination. Since you’re not limited to targeting only your deck it can be used to generate a Lost Soul, slow the opponent down by a turn, and hide their Dominant(s) on the bottom of the deck. But it gets so much better than that! If you have enough evil prophets in play, this can be as good as a one sided “draw 6” and it hides your Lost Souls under your deck!

Speaking of “vain”, one of the Bible stories that always reminds me of an absolutely vain effort is the story of Elijah vs the Prophets of Baal on Mount Carmel. It’s an amazing story of God doing the impossible (once again). But these foolish prophets vainly attempted to get their “god” to act. 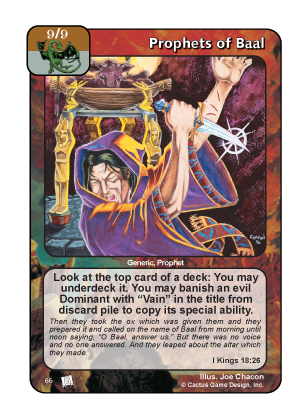 With all the stiff competition for Dominant slots, it’s hard to find room for cards like Vain Philosophy and Vain Visions. But what if you got to use those evil Dominants twice? That might just make it worthwhile! If you’re worried about this character being discarded before you get the chance to double up on your “vain” Dominants, you can always include Necromancer to help your cause. It looks like magicians will pair nicely with evil prophets!

Not all false prophets were overtly evil. Some were very deceptive. One such story can be found in I Kings 13, where a lying old prophet got a man of God killed so that he could enjoy his company for a little while. 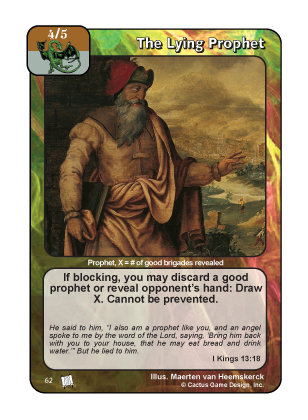 I’ve heard quite a few people say that they expect lots of green prophet offenses this season, and they’re probably correct since Prophecies of Christ has a heavy focus on the green brigade. That makes this guy a really good blocker! If you’re worried about giving up special initiative, you can always snipe a prophet in a territory first (such a Jonah), then follow up with any number of CBN battle winners available to brown and gray. In case prophet removal wasn’t good enough, this guy offers a decent card drawing ability too!

Ezekiel was hardly the only prophet to call out God’s people for dealing with each other falsely. Jeremiah calls out Israel’s evil leaders, both prophets and priests, for being deceivers. 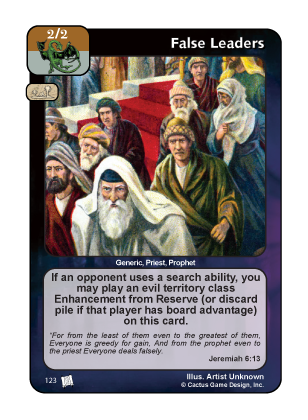 This started out as a reprint of False Priests from the Priests set, but shifted to reflect both groups of leaders that Jeremiah called out in 6:13 so that it functions in the evil prophets theme.

There are a lot of fun and tricksy plays you can pull off with this card if the opponent searches their deck, discard pile or Reserve. Notably, it can use the new False Peace from phase 1. There are multiple territory class options that can be played on this character for artifact removal, negates, and even character removal! It rarely came up in my testing, but if the opponent has board advantage, those options become almost limitless!

In addition to some pretty amazing characters, evil prophets need some Enhancement support if they’re going to be successful. This next card was previewed during phase 1, but moved into phase 2 for a slight rework and additional testing. 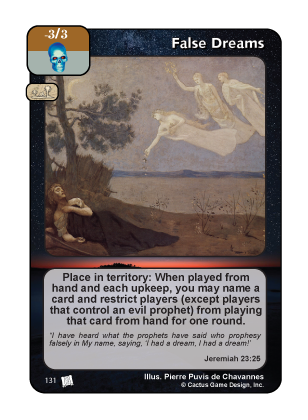 This card temporarily buys you some time by keeping an opponent from playing a specific card if you have an evil prophet. Without an evil prophet, it will stop you too, which might be worth it depending on the game state.

Similar to Three Woes, you have to remember to refresh this ability on each of your upkeep phases. Sometimes players tend to forget about triggers like this before moving into preparation phase actions. Don’t do that, because you don’t want to miss out on taking advantage of this ability! 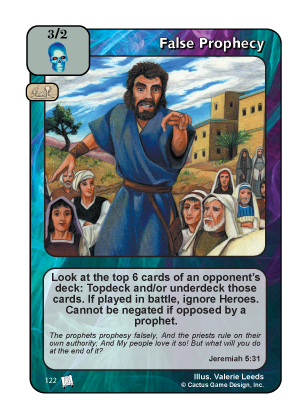 Our last preview for today combines some “false prophet deck stacking” with some anti-prophet “hate”. This reprint of the classic card from the Prophets sets expands on the original ability to make it useful for modern day game play!

Will the evil prophet theme be potent enough to see play in top level tournaments? Will some of these characters get splashed into top defenses? Will every deck that uses The Deceiver be packing a Lying Prophet in the Reserve? Is the support for the “Vain” Dominants good enough for them to make the cut? Let me know your thoughts in the comments below. And check back soon for more Prophecies of Christ phase 2 previews!

Gabe has been playing Redemption since early in 2006. While life has changed a lot since that time, his love for Redemption has not. He hosts a playgroup and assists with the design and development of upcoming set releases and even plays competitively on occasion. View all posts by Gabe here...