In my first preview article, I mentioned how God unfolded His plan for redemption through the covenants He made with His people. God’s covenant promises offer blessings for obedience. But in stark contrast, they also offer curses for disobedience.

In phase 1 we saw reprints of some classic curses – Wasting Disease, Carcasses, Incurable and Unknown Nation. I’m sure it’s no surprise that we will see a few more in phase 2 to fill in the missing brigades.

This Priests classic found new art and swapped brigades with Carcasses (which feels more appropriate in crimson due to the animal association). Formerly it could discard a Fortress, but only if certain conditions were met. That ability is marginally useful today. Let’s take a look at what changed. 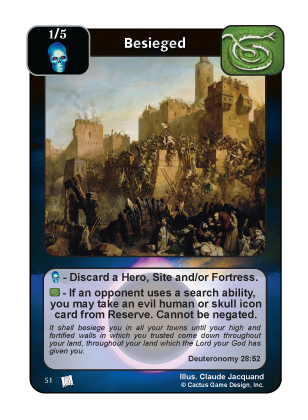 The evil Enhancement side can still take down a Fortress as the scripture reference implies, but has the potential to get you a 3-for-1 exchange if your opponent(s) have a Hero, Site and Fortress in play. With all the great Cities seeing print, that’s becoming more and more likely!

As an Artifact, this adds to the arsenal of search and draw “punisher” cards we’ve introduced this year by growing your ability to “besiege” your opponent. This also solves the “Dull” problem of messy cascade negates if you happen to play the searched out card in battle, because Besieged cannot be negated as an Artifact!

When Covenants and Curses were first introduced, the special abilities were primarily designed to work as an Artifact and the numbers were the main benefit for using it as an Enhancement. The original Unsuccessful worked equally well both ways until the rules for Artifact activation were standardized, causing the old wording to not work as originally intended. 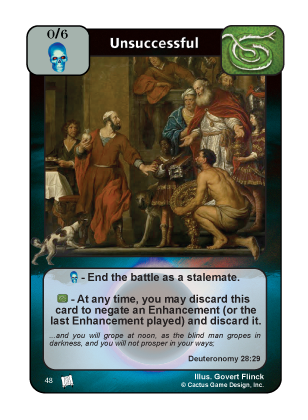 When used as an Artifact, this has the power to stop any Enhancement that can be negated. That’s a pretty powerful ability! It no longer matters if it’s good, evil or even still in play… it will be “unsuccessful”.

End the battle cards have taken in a hit ever since You Will Remain (YWR) became a staple for many decks. If you can bait your opponent into using YWR for the “add to battle” ability, or play this before it shows up, it’s the perfect card to ensure the opponent’s rescue attempt is “unsuccessful”. Unlike other end the battle cards, it doesn’t matter if your defense is higher, the battle still ends in a stalemate.

The original Blindness is a card that I don’t think I’ve ever seen played. It’s not that it wouldn’t be nice if you were able to pull it off, but the game lacks the tools to do it reliably while still keeping pace with another player. I have a feeling this reprint is going to make the cut in a lot of orange defenses!

When used as an evil Enhancement, Blindness works well with many of the top orange defenders. Characters like Prince of this World, King of Tyrus (PoC) and Red Dragon (RoJ) all love the idea of negating all Enhancements while leaving their strong character abilities untouched!

The Artifact side of this continues the in the vein of Wasting Disease and Besieged, by punishing players for searching. It does this in a way that causes the player to “blindly” take a card instead of getting what they wanted. That basically turns the search into a draw 1, the difference being that they don’t get to replace a Lost Soul if they randomly select one (it gets put in play).

An early version of this card was previewed on the forums last fall before PoC was split into phase 1 and phase 2. It’s changed a bit since then but still provides two powerful options to choose between. 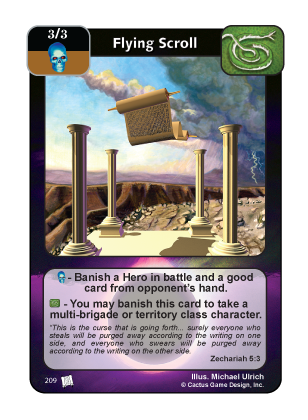 When used as an Enhancement this plays out like an evil version of Bible icon on Fourth Bowl of Wrath. If your opponent isn’t careful they may find themselves wishing for Covenant of Prayer to get back a crucial Dominant!

Is there a Babylonian Merchants, Priest of Zeus or Jonah across the table getting you down? Maybe it’s Jacob (CoW) keeping you from doing fun things to an opponent’s hand or deck. Whatever the case, using Flying Scroll as an Artifact is the answer to your problem!

In Prophecies of Christ phase 1, we introduced four new characters that we affectionately referred to as “curse bearers”. Each one can grab and activate a single-brigade Curse in their respective brigade as early as the opening stages of the game! These characters compliment the new arsenal of Curses very nicely.

We were saving the black “Doomed Philistine” and crimson “Foolish Edomite” versions for phase 2. But during the preview of King of Tyrus, the conversation took us in an interesting direction. What started out as a joke quickly turned into a serious but fun conversation among the elder team. What if we started making characters that could be given to an opponent and produced a negative effect so that you really don’t want to have them?

After much discussion and some play testing, we have two such characters in phase 2 which took the place of the last two “curse bearers”. We’ve given them the identifier “Fool” which will be officially defined before the phase 2 releases. Fools will be limited to 1 per territory for game balance. I’m sure you can imagine how out of control it could get to end up with even a few different “Fools” in your territory making you do detrimental things.

Canaanites seem like a perfect fit for the first fool card, being a civilization known for giving characters to another player. But this is a Canaanite I don’t think anybody really wants. 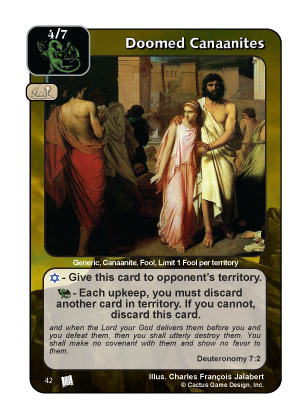 On the first turn you control this card it will start destroying stuff. Early in the game it’s not difficult to let it discard itself. But once your board is established the self-discard isn’t nearly as useful to you. What creative ways will players come up with to keep this card from wreaking havoc? Will they go as far as a chump block and give up a soul? Will they use their Angel of the Lord or Three Woes?

While this card isn’t going to make as obvious of an impact as Doomed Canaanites, it’s going to force an opponent to make some tough choices that will have a lasting impact on the game. 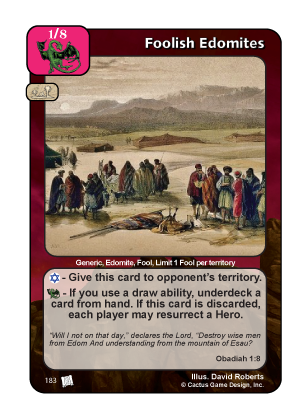 This character gives us another option to “punish” an opponent for accelerating their game. But unlike other territory class characters, Foolish Edomites don’t have to worry about Golden Calf or Flying Scroll.

When this “fool” is donated to you, you’ll have to choose whether or not it’s worth the cost to draw extra cards and hope that you have something in hand that you can afford to put off until later. There’s even a potential drawback built in if you decide to chump block with it. Skilled players might be able to use it to their benefit.

Don’t Be a Fool

You and I have a choice to make each moment of every day. Do we choose obedience to God and receive His blessing as a result? Or do we go our own way, choosing disobedience, ultimately leading us to the consequences of the curse and the folly of the fool?