The newest release for Redemption, Prophecies of Christ, is set to release in early December! We’ve got LOTS of great details about the set to share with you today!

Prophecies of Christ is being released in two phases. The first phase, coming out in December 2018, consists of 129 cards. Phase 2 consists of 93 additional cards and is scheduled to release in May 2019. The entire 222 card set will be combined into one package sometime before Nationals 2019.

Both phases will be packaged in card boxes that contain 15 cards. They will consist of 5 new Prophecies of Christ cards (4 common and 1 rare/ultra rare). The additional 10 cards will be comprised of 4 Faith of Our Fathers, 4 Rock of Ages and 2 Women of the Bible cards. 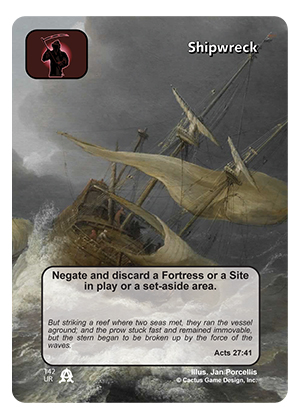 After printing back to back sets (Cloud of Witnesses and Revelation of John) with “chase” ultra rare cards we decided to take a break in Fall of Man from creating high demand ultra rare cards, and attempted to keep them all closer to an even level of playability and power. We had planned to follow that same trend across the entire block of “Christ Centric” sets we have planned for the next few years. But after reviewing sales of the past 5 sets, we’ve found that sets which contain a “high demand” or “chase” ultra rare (Early Church, Cloud of Witnesses and Revelation of John) outsell sets that do not contain one (Persecuted Church and Fall of Man) by a margin of 2:1 or more!

While we know that there are players that would prefer fewer “chase” cards, sales are necessary for the game to be successful. The majority have voted with their purchases in favor of having “chase” ultra rare cards. Therefore, we’ve changed direction and will attempt to have a “high demand” ultra rare in phase 1 and phase 2 of Prophesies of Christ. This change in direction is part of the reason for the increase to two ultra rare cards per box.

Due to our transition between editors, the previews for phase 1 have all be posted on the Cactus Game Design forums instead of Land of Redemption. We will continue to reveal some of the changes that have taken place to previewed cards there. But expect the all the final images to be posted here on Land of Redemption later in November.

Preorder your Prophesies of Christ sets and boxes at Three Lions Gaming!