For the past couple years Cactus Game Design has really improved the prize support for Nationals. This year in Texas, Nationals 2018 we get an all-new set of promos to be given out! Of course, there are the participant promos, but also all new winner promos!

Let’s start with a really cool card that will be given to everyone who participates in an event at Nationals – Whirlwind / Everlasting Ground! The original concept was given to us by the hosting team. As I understand it, the concept was created by them and some of their local players. We had to go through a number of adjustments to shorten the ability so it will fit on the card and to incorporate their vision within the scope of what we do in Redemption. I believe the playtest team was able to keep the original intention of the card even if it didn’t turn out exactly as it started out. 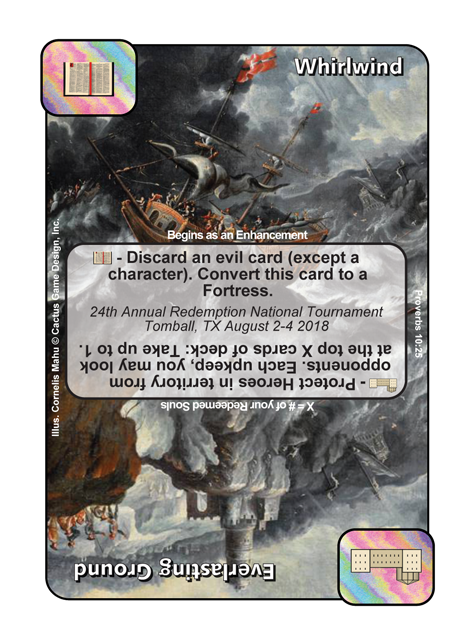 Whirlwind is an extremely diverse card! Being a rainbow Enhancement means that pretty much any deck can include it and it will be widely accessible from the Reserve if you choose not to put it in the main deck. While it can hit a wide variety of targets, I expect one of the most common will be Three Woes. If that’s all it did, that would be a nice card that a lot of players would want in their deck… but there’s more! Once played, Whirlwind converts itself into the Fortress Everlasting Ground, making it very difficult to negate. 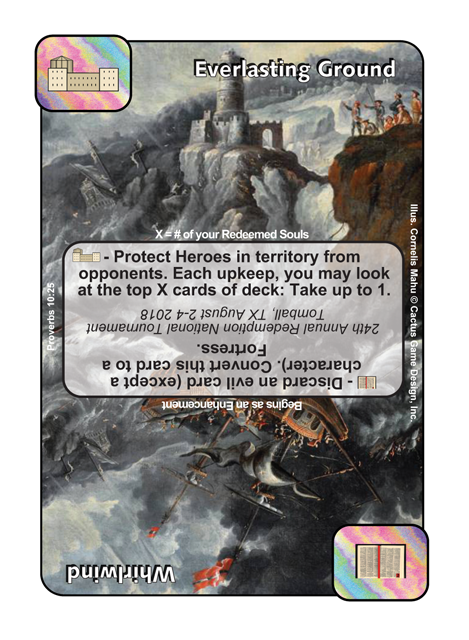 Everlasting Ground provides much-needed territory protection for your Heroes. That means that opponents won’t be able to pick off your Heroes with Archers and territory class discard abilities, not to mention AOE effects like Dragon’s Wrath! They can’t steal them with Nic’s Teaching either. They cannot even band to them with their Heroes. But watch out because it keeps you from presenting a new Hero for Goliath.

If that’s all Everlasting Ground did it would be a really nice bonus after playing Whirlwind. But there’s more! As long as you have at least 1 redeemed soul you gain a card from the top of our deck every turn. I know I’ll be trying to find a way to fit this into a lot of my decks!

Instead of only the first place finisher getting a winner promo, the past few years promos have been given to the top 3. But instead of getting the standard winner promo (aka Dragon Raid) that is given out at all other tournaments, we’ve gotten special winner promos for Nationals. If you’ve been following the pattern, the past two years we’ve given a borderless Angel of the Lord to the top 3 finishers. Since we only have two pieces of art on the starter deck Angel of the Lord cards you might think we’d repeat one of the pieces of art this year. Instead, we found an awesome new piece that might just be the coolest of them all! 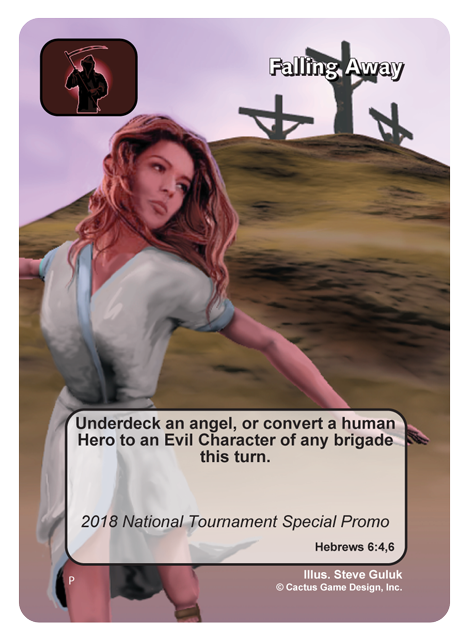 The third new promo, the one that’s given to the first place finisher in each category, isn’t going to be a big surprise to many of you. There is one remaining Son of God art that hasn’t been used the past two years. 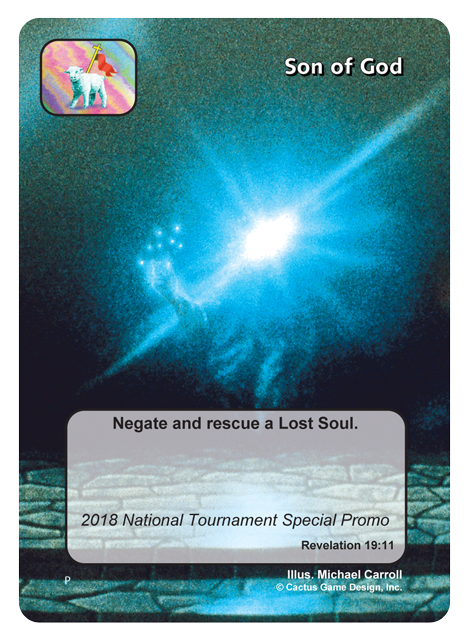 BIGGER and BETTER Prizes at Nationals!

Anytime you place in a tournament category you receive prize packs. But at Nationals, the first place finishers have the option to forego the prize packs for a full set of the latest Ultra Rare cards from The Fall of Man! You’d have to be crazy to take the packs instead of these three amazing cards! 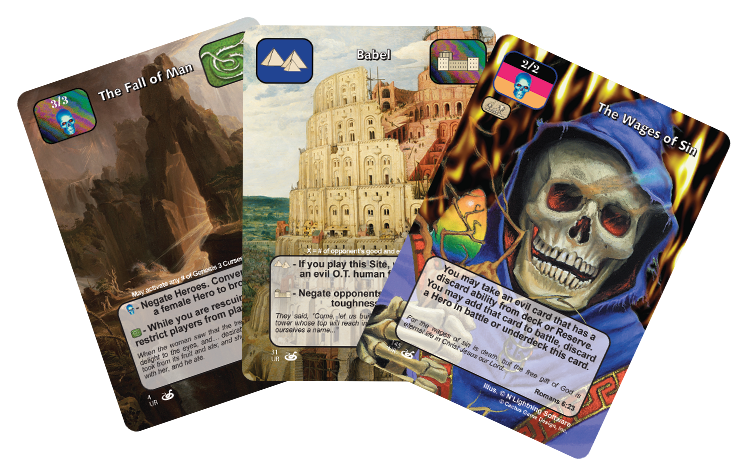 Once again, Cactus Game Design has given us a really nice looking generous pool of cards to play for! We encourage you to make every effort to attend Nationals and give it your best shot to win one or more of these. But if for a reason you cannot attend, if last year is any sign of things to come, these beautiful cards will be available on the secondary market through the Cactus Game Design forums.

In the next few days, you can expect an announcement about the player created card prizes, including the categories that will be receiving that prize as well as some changes we’re making to the program. Check back soon for more info!