For years, Red brigade has been a punching bag of sorts for the Redemption community. Long believed to be the weakest good brigade by many high-level players, its biggest claims to fame recently have been being paired with Purple for the Throne offense, as well as being the backbone of the Children of Light offense. In fact, Red’s compatibility with Throne of David has been a drawback, as future Red cards now have to be considered in terms of how they strengthen the Throne offense. The Unity identifier on Benaiah, who was spoiled earlier, is one way to manage this. Abigail, King Saul, The Angel Under the Oak (AUTO), and Samuel will all turn Benaiah into a vanilla 8/8 Red warrior – which isn’t much help to the Throne offense. But Benaiah isn’t the only tool in the toolbox that Red gets this year! We’ve also seen Captured Kinsmen, Jehu, Jehu’s Sword, and Gibeonite Treaty so far – let’s see what other Red cards the Fall of Man brings us. 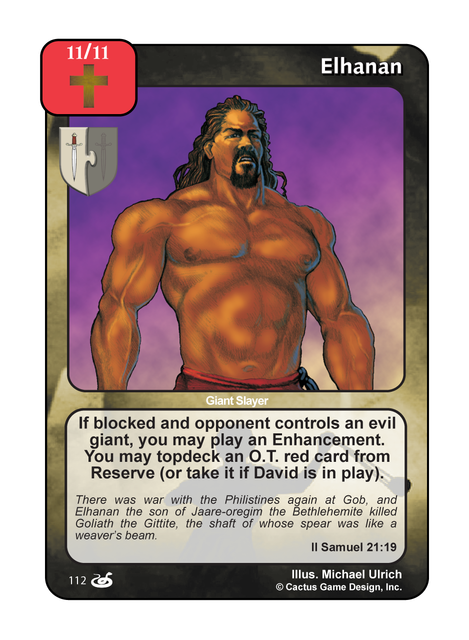 You’ve seen many giants already spoiled so far for Fall of Man, so it is only natural to include some of the famous warriors that fought against those giants. Elhanan defeated Goliath’s brother Lahmi in battle, which is why his numbers outright defeat Lahmi and why he gets a powerful “Play” ability if your opponent controls an evil giant. (And yes, there are ways to build your deck so that you can set this up, even if your opponent plays no giants!) Elhanan also opens up some Reserve access for Red, something they sorely needed after Revelations of John. Similar to many other OT Red cards, Elhanan’s ability gets better if David is in play. 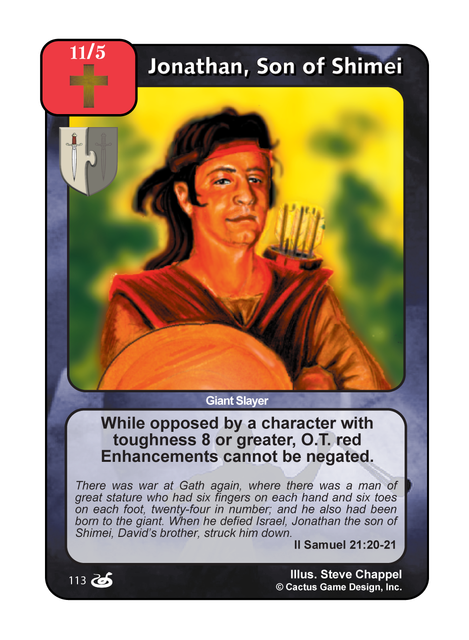 Continuing the Giant Slayer theme, Jonathan’s claim to fame was defeating the 12-Fingered Giant. His ability grants a conditional CBN to OT Red enhancements while he is opposed by a character with 8 or more toughness. That includes every giant, as it should! Earlier iterations of his ability included a once-per-game “Choose a giant to block” ability. Paired with his CBN enhancements, this proved too strong and was eventually removed. But with Uriah the Hittite, this now gives Red 2 heroes with CBN-granting abilities, hopefully leading to more consistency and power for the Red offense. 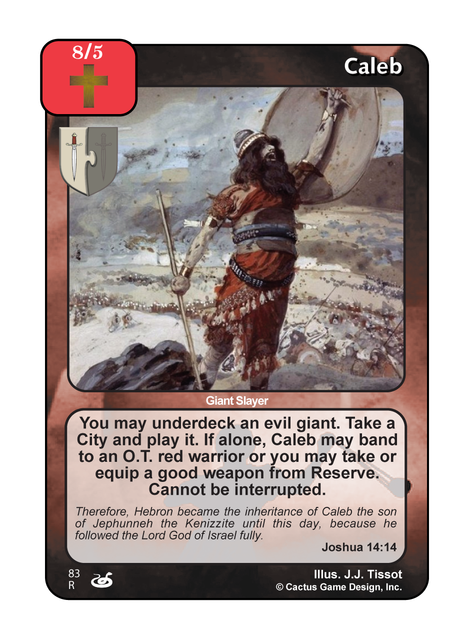 Caleb was my favorite Red hero to playtest. We know a lot more about Caleb from Scripture than Elhanan or Jonathan, and everything Scripture has to say about him is positive. He remained faithful and trusted God when he spied on the giants living in the Promised Land. This was despite 10 of the 12 spies spreading a fear-laced report that caused the Israelites to doubt God’s ability to lead them into the Promised Land. Judges 1 tells us that Caleb also drove out the 3 sons of Anak in Hebron – this was after 40 years in the wilderness and some of Joshua’s military campaigns!

There’s a lot going on with his ability, and all of it is good. He provides in-set counters to the giants and Cities that FoM introduces since he did this very thing when the Israelites entered the Promised Land. This is very relevant in Booster draft as well as Constructed play. Does opponent play Babel in territory? It can be yours as soon as you can attack with Caleb, regardless if they played it as a city or fortress! If alone, Caleb offers the flexibility of banding, or pulling weapons out of Reserve and taking them to hand, or even equipping them straight away. And the best part about his ability is it cannot be interrupted. Red finally gets an OT hero with a CBI or CBN band ability – not counting Joshua, who almost always bands to Captain of the Host. Now, Caleb and Joshua can band to each other, making a formidable team regardless if Captain is included or not. 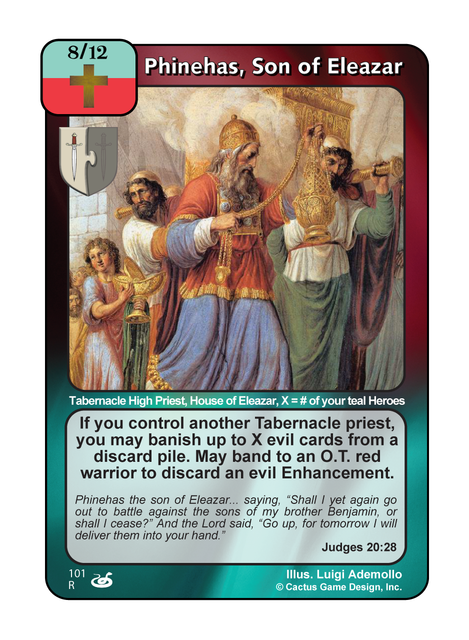 Many players have clamored for a Phinehas reprint over the years, and he’s finally here, sporting a shiny new Red brigade! This version has his prior strength and toughness switched – the 12 toughness represents how he protected the Israelites from God’s righteous anger with his infamous Zeal. Phinehas will find a home in a Tabernacle Priest deck, where he can provide some hard-to-come-by discard pile removal. He’ll also be right at home in a Red warrior deck, where he can band to a Red warrior to snipe cards like evil weapons. With banding cards that interrupt the battle (like Battle Cry or Not Alone), Phinehas can turn the interrupt into a negate. And who can forget about Zeal for the Lord, which is still CBN on Phinehas? 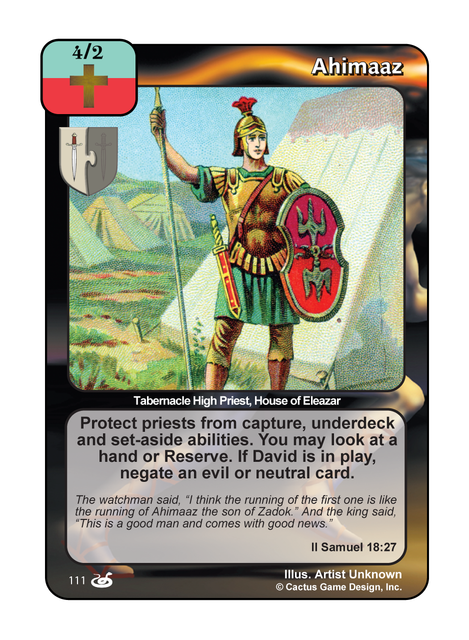 Ahimaaz is back with a new brigade! He still retains his ability to peek at an opponent’s hand, now with the option to see a Reserve instead. Like Phinehas, Ahimaaz provides a boost to both Priests and Red warriors. His protect ability protects all priests in play and includes something that Red’s banding craves – protection from Underdeck (and therefore Scattered). He can also negate a troublesome card if David is in play. David being in play is pretty important to the Red warrior offense! 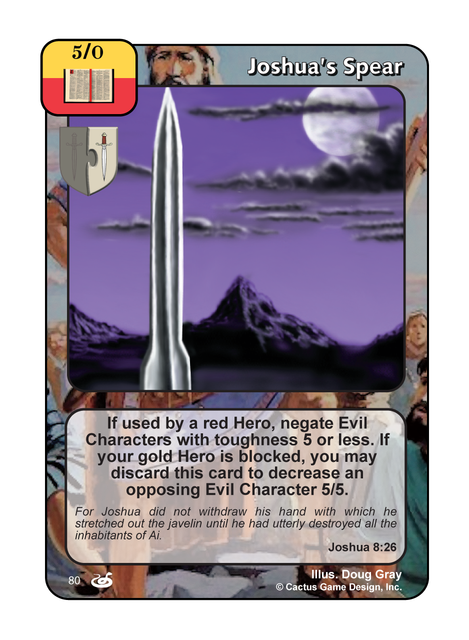 Red continues to add to its arsenal of deckable weapons. The dual-color with Gold gives the Gold Judges a new toy as well; there really haven’t been any good Gold weapons in the past, save for Sword of the Spirit. The ability could be useful for mono-Red or mono-Gold heroes but shines the most when used by a Gold and Red warrior. Joshua son of Nun is the obvious one who gets to use the whole ability, but there are few other lesser-used heroes that can get the double benefit as well. Unlike Roman Spear, which forces you to discard it when it activates if you want to decrease a human 0/5, Joshua’s Spear is discarded after being blocked, making it easier to function as a battle-winner. 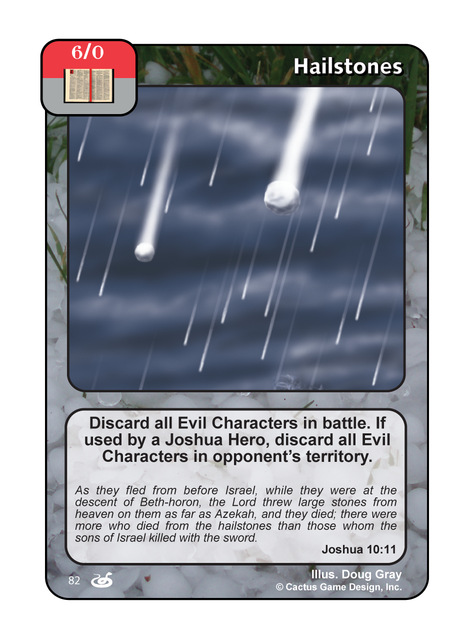 Joshua 10 recounts an incredible battle between the Israelites and 5 kings. The kings besieged Gibeon because the Gibeonites had just made a treaty with the Israelites. At the Lord’s direction, Joshua attacked the 5 kings by surprise when he marched his army all night. The Lord sent hailstones upon the fleeing enemies, which is why Hailstones is Red and Silver. Then Joshua prayed one of the most intriguing prayers recorded in Scripture – he asked the Lord to keep the sun in the sky so that he could wipe out their enemies in battle! The author of Joshua states that “There has never been a day like this one before or since when the Lord answered such a prayer. Surely the Lord fought for Israel that day!” And this was after he had already marched his troops all night. Hailstones becomes even more devastating if you play it on a Joshua hero, as you can hit your opponent’s evil characters in territory. And with the discard ability, Uriah is a great hero to play this on, as well as Jonathan if you are blocked by an EC of */8 or higher.

So what do you think? Does Red have enough now to compete on its own? Even if the tournament season shows that Red isn’t quite up to other elite offenses, no doubt it has made great strides towards becoming elite itself.

4 thoughts on “The Resurgence of Red”