Over the past couple of years, few Redemption topics have garnered as much attention or led to as much discussion as set rotation and “cost of entry” (i.e the cost for new players to become reasonably competitive). Like most topics, these have a wide range of opinions represented and many reasonable ideas on how (or how not) to implement them have been presented. One thing that I believe most everyone in the Redemption community agrees on is that they want what is best for the game. Much like we see in politics, however, people can have drastically different ideas on what is best for the game. People come from different backgrounds and have different experiences with the game so that is what will shape their opinions, and personally, I believe that so long as discussions about these “hot topics” are done respectfully they are worth having. As recent events have shown, however, we must accept that not every decision is going to make everyone happy. It is often said that a good negotiation occurs when none of the parties walk away completely happy with the result.

When it comes to set rotation, there are definitely pros and cons to both sides, and I believe these have been laid out pretty well by people representing both sides. To rotate or not to rotate, that is the question…Before anyone gets too excited or distraught, let me be very clear: no decision has been made on a potential set rotation happening. Likewise, no decision has been made that set rotation will never happen. Therefore the goal right now should be to take steps that will be beneficial to the game regardless if rotation happens—more on that in a bit.

The other issue, “cost of entry,” is also something that needs to be considered if the game is to grow. The past two sets have sold extremely well for Cactus (to the point where Rob sold out of shipments of Revelation of John before he had even received them). A large part of that success has been the inclusion of “chase” cards such as The Second Coming and Three Woes. While these specific cards have leveled off somewhat in terms of price, they still represent a large investment for new players who want to build competitive tournament decks. (While it is certainly open to discussion if these cards are “necessary” to build a competitive deck, it is undeniable that they are powerful cards that give players certain advantages). Consequently, early on in the set design process for Fall of Man, we decided we did not necessarily want another The Second Coming or Three Woes level chase card in this set, but rather we wanted three Ultra-rares that would be similar in power and theoretically be equally desirable to players. While there’s still a chance one of the Ultra-rares could jump above the other two in terms of value (my bet is on the one that hasn’t been revealed yet), any disparity should be far less than the disparity between Eternal Inheritance and The Second Coming, or Red Dragon and Three Woes.

As we considered these two issues, we wondered if there was a way to address both, and we believe we have found one—Legacy Rares. Legacy Rares will be cards from older sets that will get printed on the new card face, have updated wording (wording will match the wording found in the ORCID) and in a couple cases have improved artwork. There will be 18 introduced with the Fall of Man set and they will be randomly inserted at an average rate of between 3 & 4 per box. As you can see, while these Legacy Rares will be less common than the Ultra-rares, a specific Legacy Rare may be much harder to obtain. Our hope is that Legacy Rares will drive the box and pack sales for Cactus while not discouraging new players due to their likely high value (since their playability will be the same as the old versions). In fact, a new player who pulls a Legacy Rare might even find it beneficial to trade it to obtain other high-value cards that could improve their deck (and because they have the original widely available version of the Legacy Rare card, they won’t have to sacrifice having that card to use). Maybe you’re a collector and need to have one of every card or maybe you’re like me and love having alternate border versions of cards for your deck. In either case, Legacy Rares will give us something to “chase” while not putting players who don’t have as much disposable income for Redemption at a disadvantage because they can’t afford to track down those cards.

In addition to playing the role of the “chase” cards, Legacy Rares give us a head start on reprinting older cards that we don’t want to lose from the card pool if set rotation does become a reality down the road. If set rotation happened, it would be very likely that a Redemption “Legacy Set” would be printed to keep certain cards in the card pool whose old versions would be rotated out, and the Legacy Rares would be the precursor to that set. Once again, this is not in any way guaranteeing that set rotation will happen—we simply want to keep our options open as the game continues to evolve.

On Easter Sunday, Gabe “spoiled” The Garden Tomb Legacy Rare. While The Garden Tomb certainly connects to the Fall of Man, it comes much later in the story, and so that particular card was a “Happy April Fools Easter” from Gabe. Here is a few legacy Rares that connect directly to the Fall of Man set that you might find in your Fall of Man packs. To close, let me just say that I’ve seen all of the previews, and I am super excited to start pulling these! 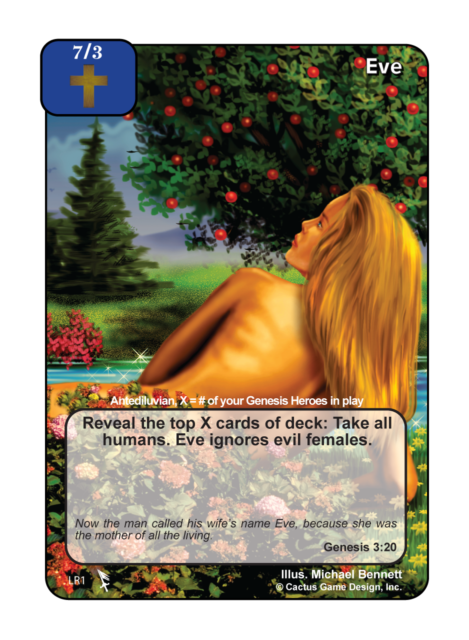 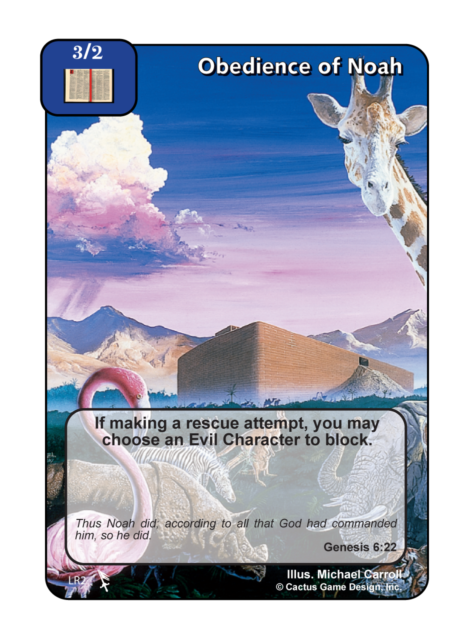 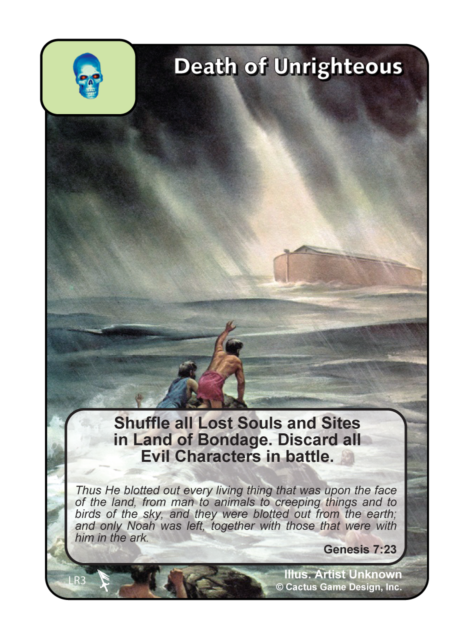 5 thoughts on “Playing in the Present, Looking to the Future”