Gray as the primary color on defense has been one of the most potent at various times in Redemption history. Zac Cornell won Nationals in 2014 with a Gray Pharisee defense, Are Pharisee’s the best Gray defense? Maybe. Josiah Beers won Nationals in 2013 with a Gray Emperors/Romans defense, Are Emperors/Romans the best Gray defense? Maybe. Tim Mierzejewski won Nationals in 2008 playing the precursor to Josiah’s deck, so maybe Emperors really are Gray’s best defense. Gray also has a couple of other themes, Syrians aren’t overly powerful, though Naaman has been popular for years. Gray is also the home to one other theme, though you might not know it, since it currently only has one pure gray character, and isn’t referenced in any ability… until now! 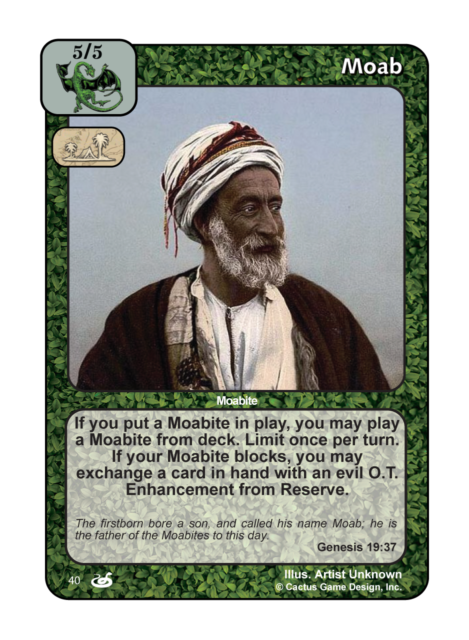 Moab was one of the sons born of Lot’s Daughters, and his descendants are named for him – The Moabites! As the Father of a nation, Moab helps you to generate the Moabite defense and ensures their success in battle by providing them with resources. It should also be noted that Foreign Wives happens to be a Moabite, allowing you to hide her in your reserve until you can be sure your opponent won’t punish you with Babel if you put her in play. Now that we’ve taken a look at the lynchpin of the Moabite defense, I’m going to lay out all the Moabite cards and take a deep dive into how PT actually works, by going over a decklist that I posted to the boards a few weeks ago. 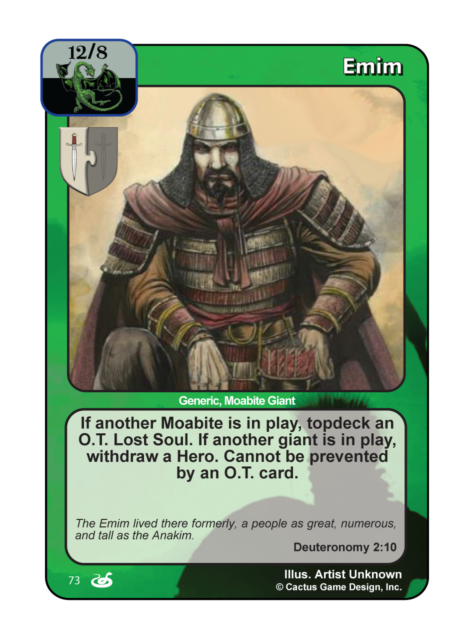 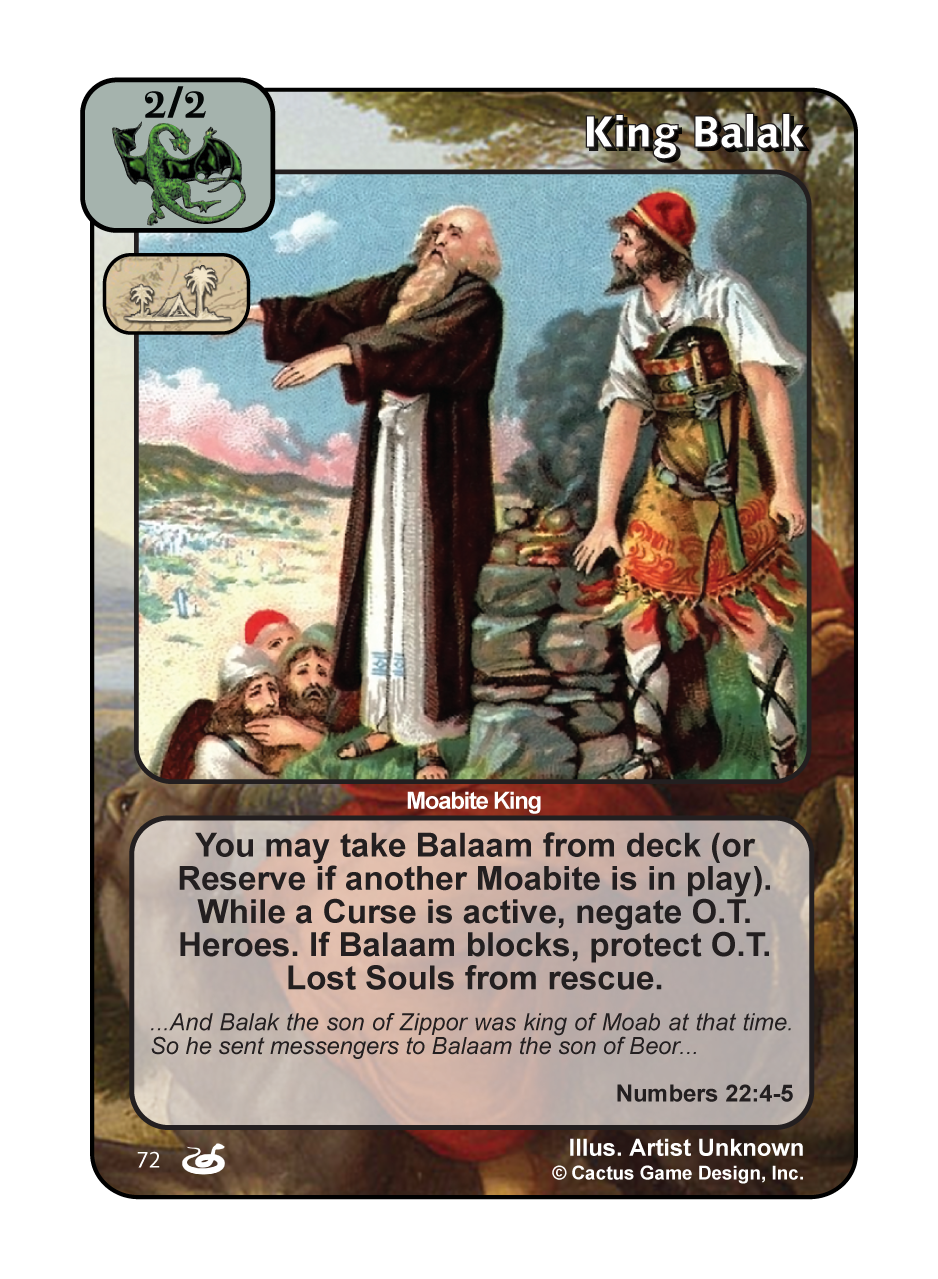 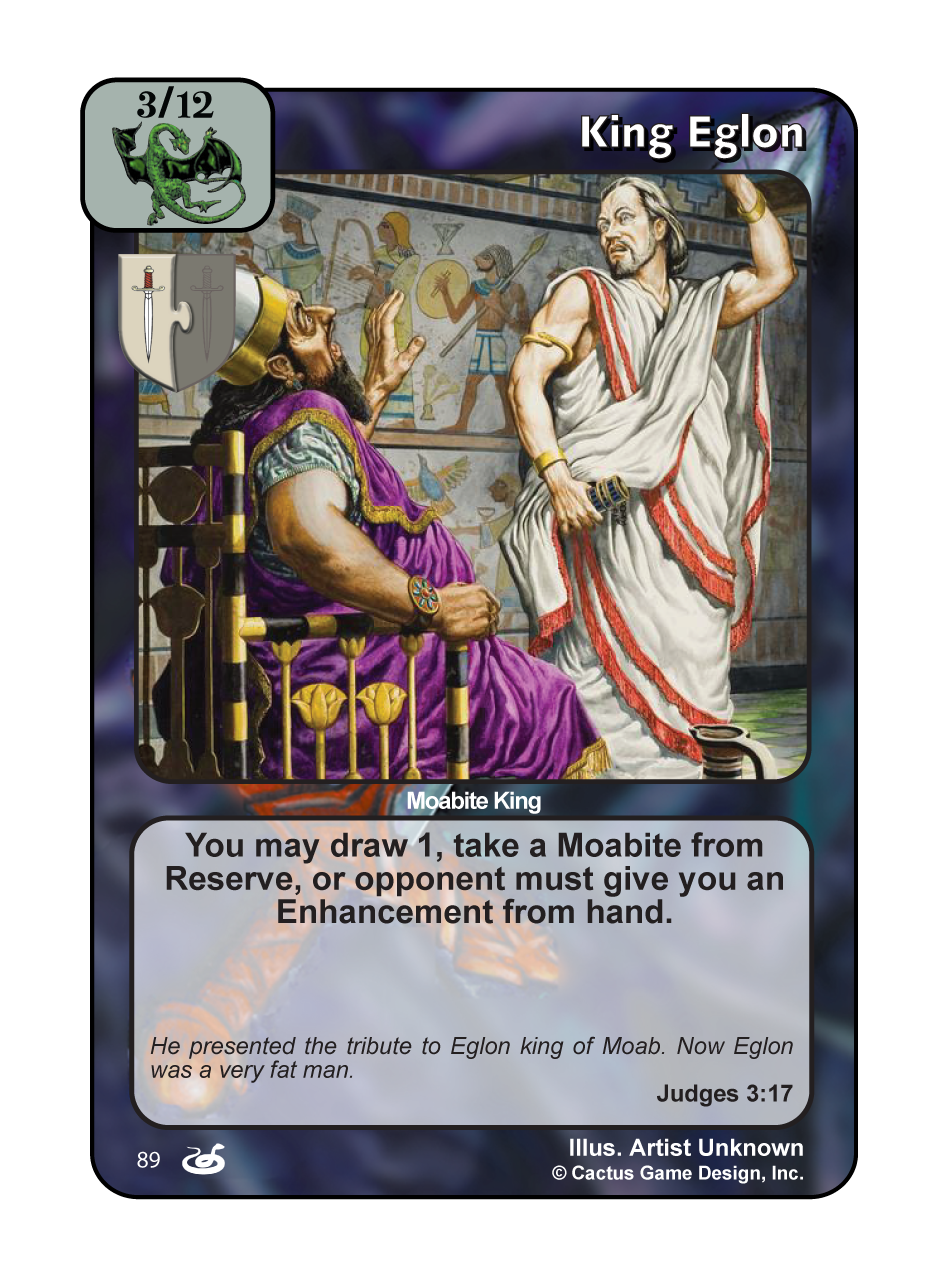 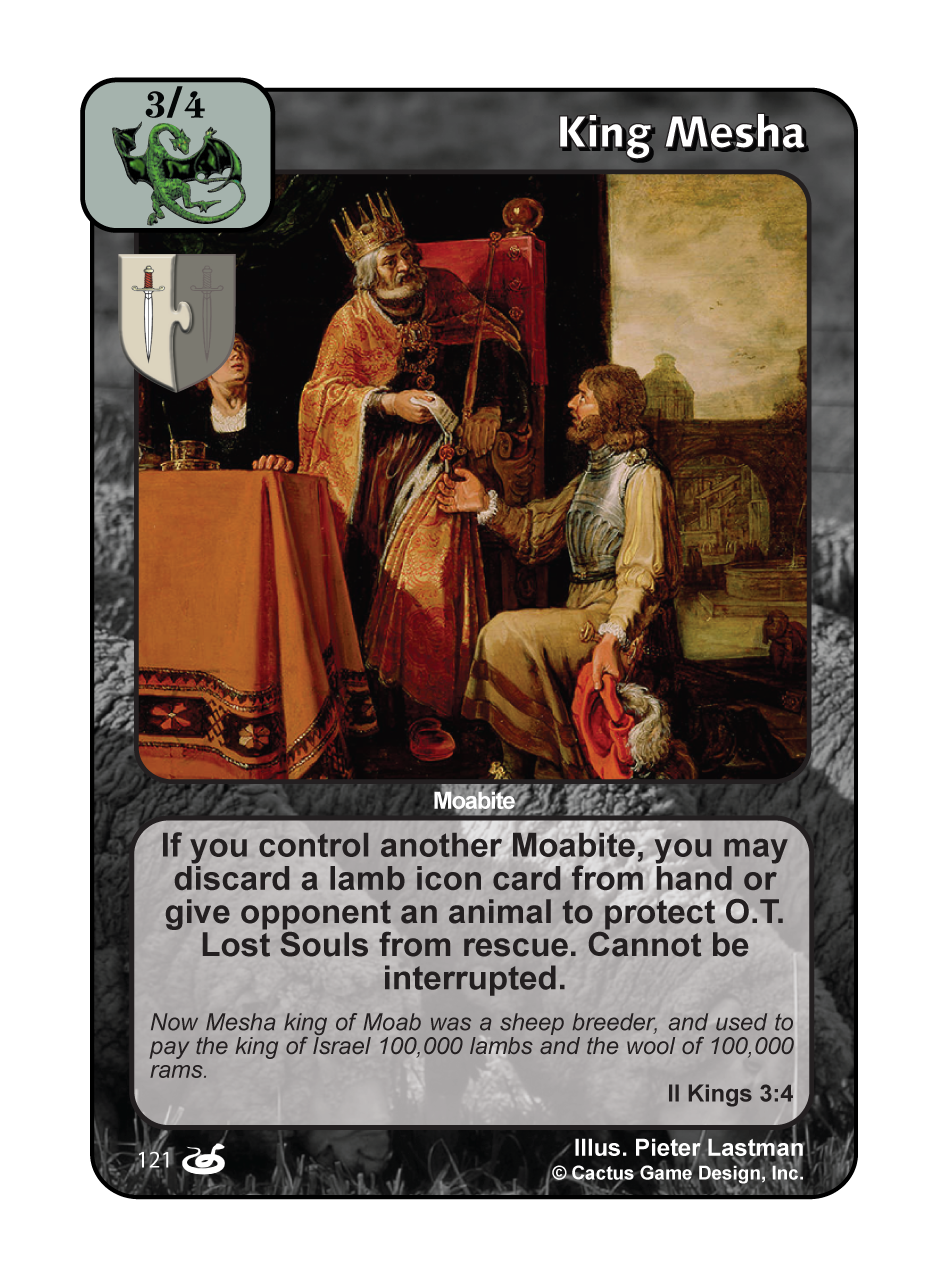 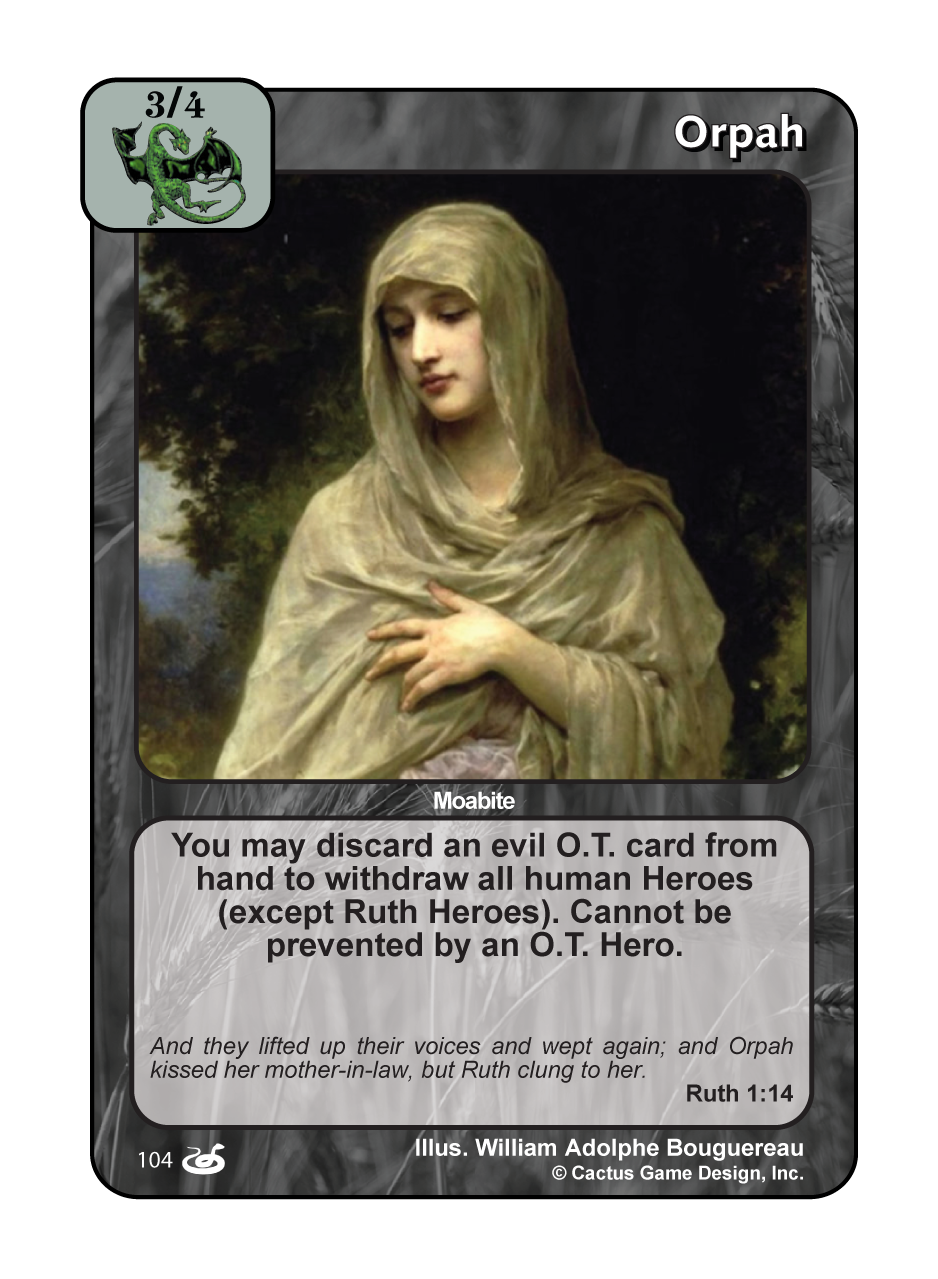 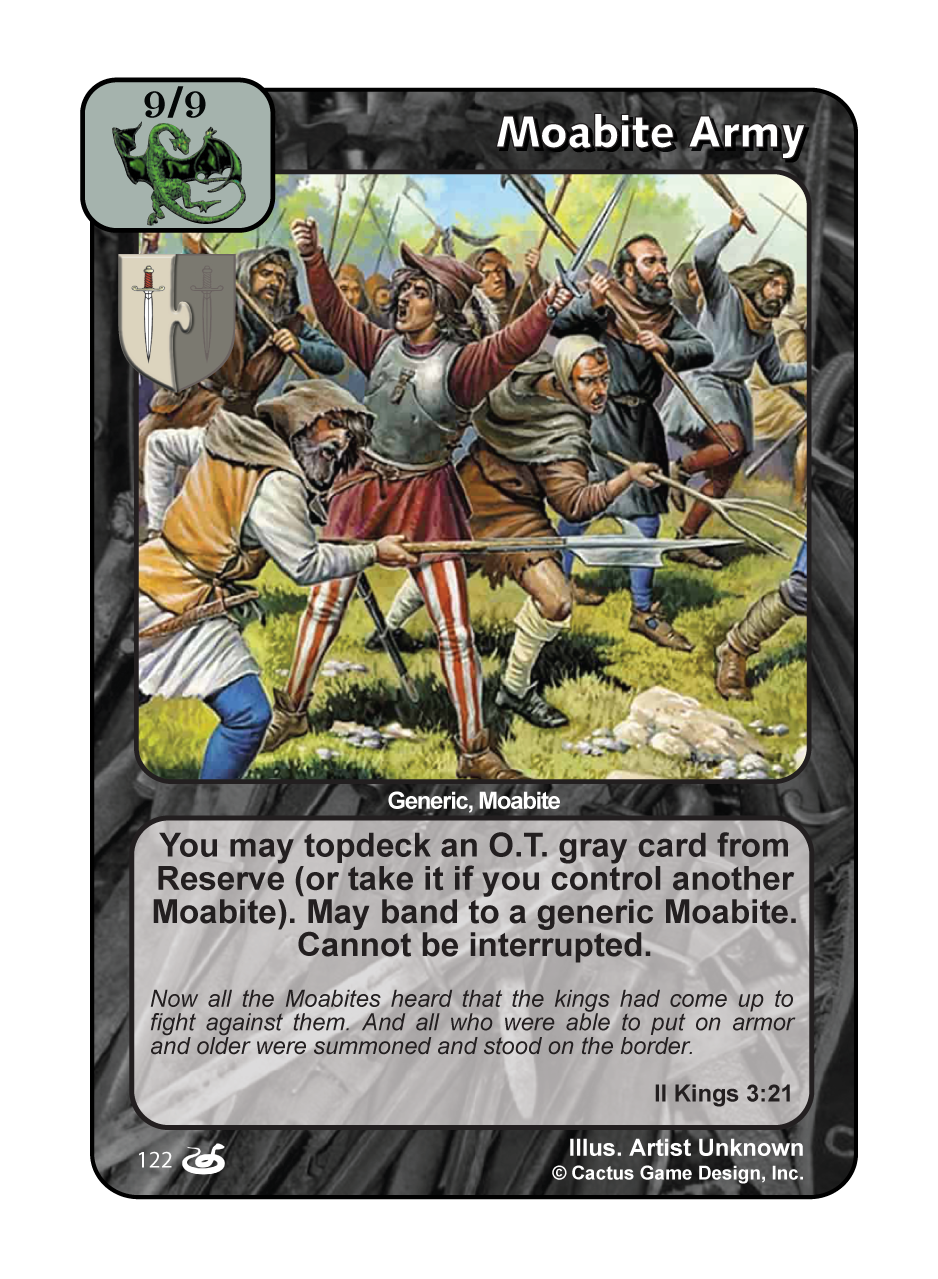 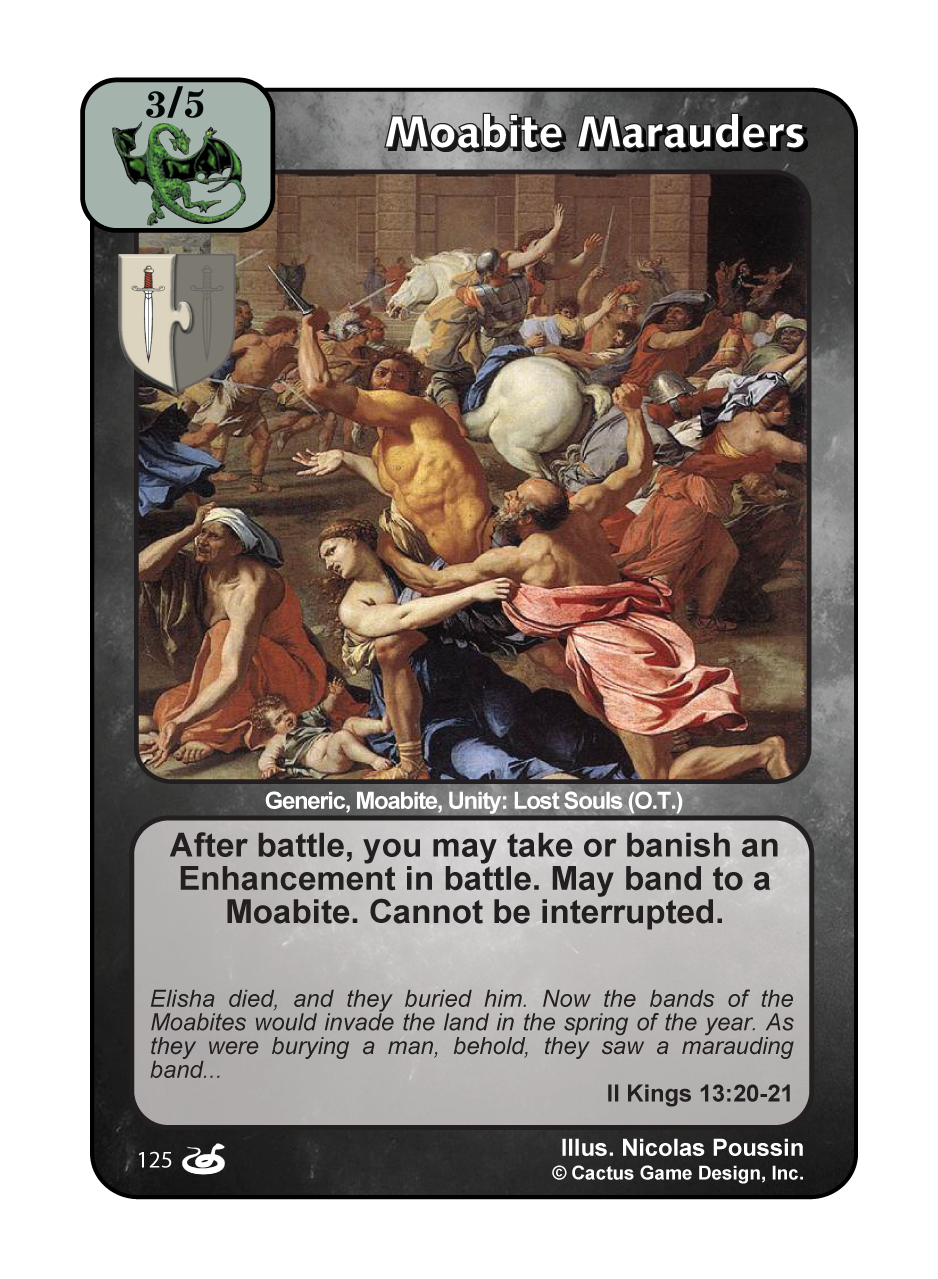 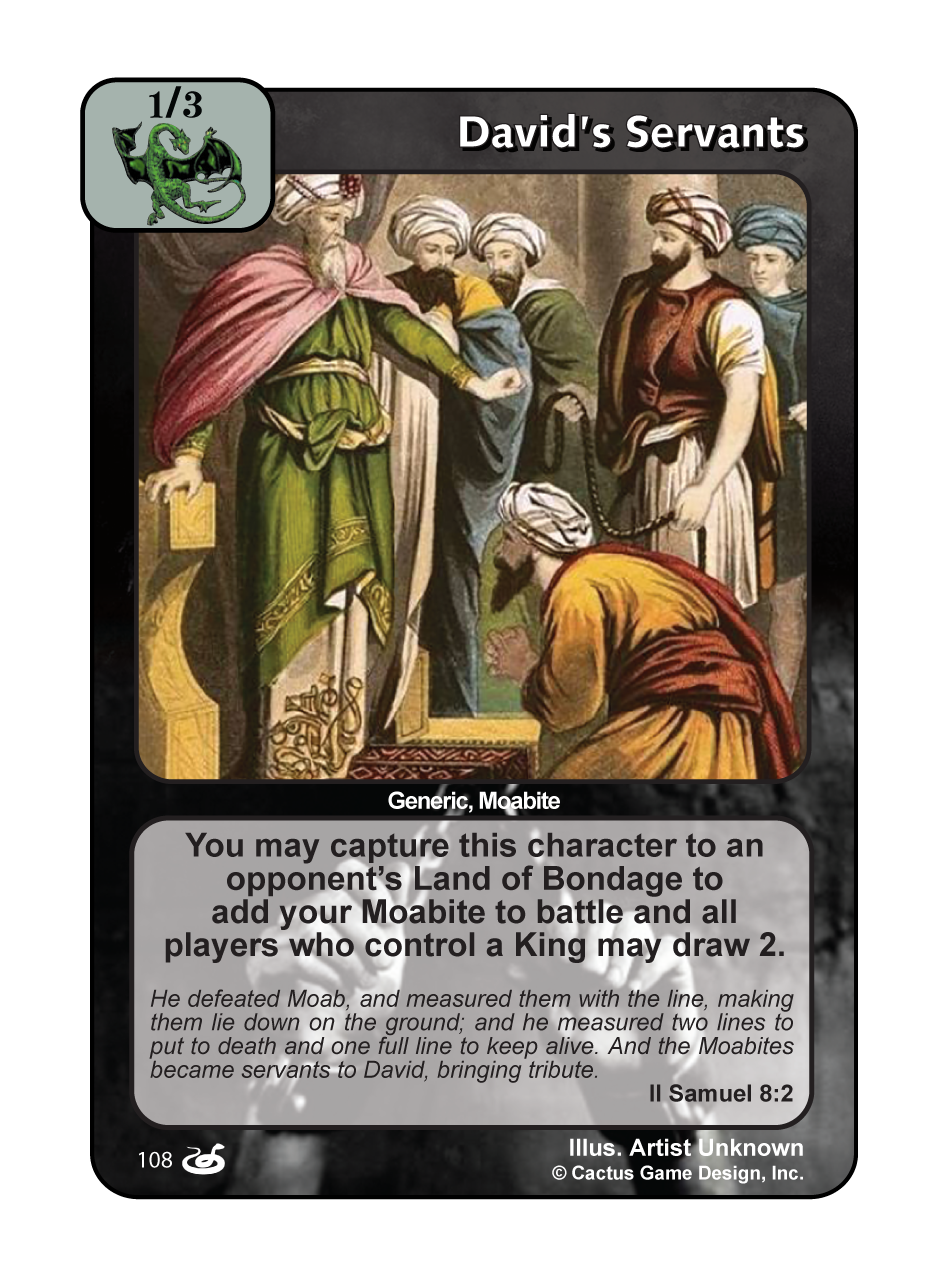 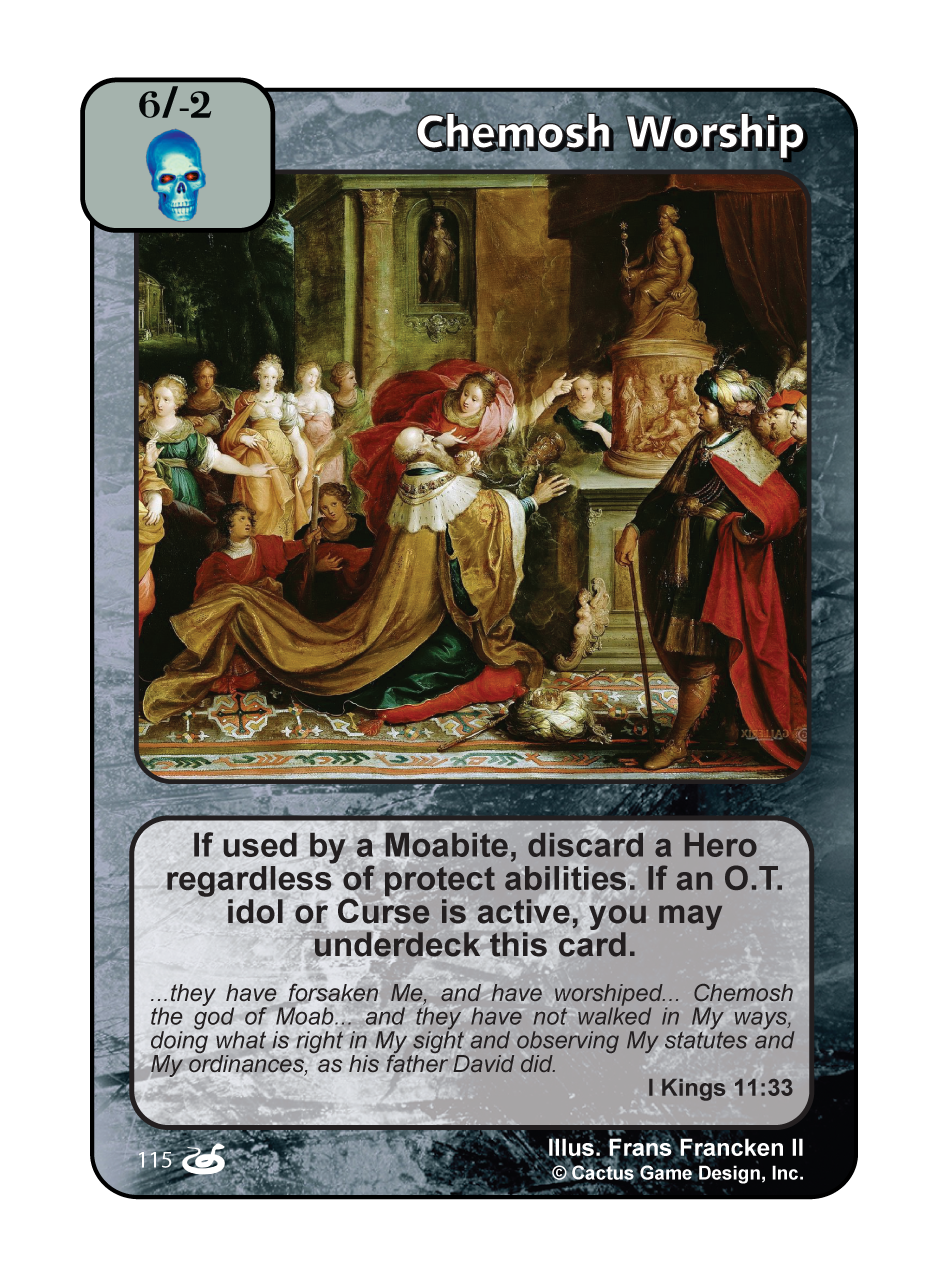 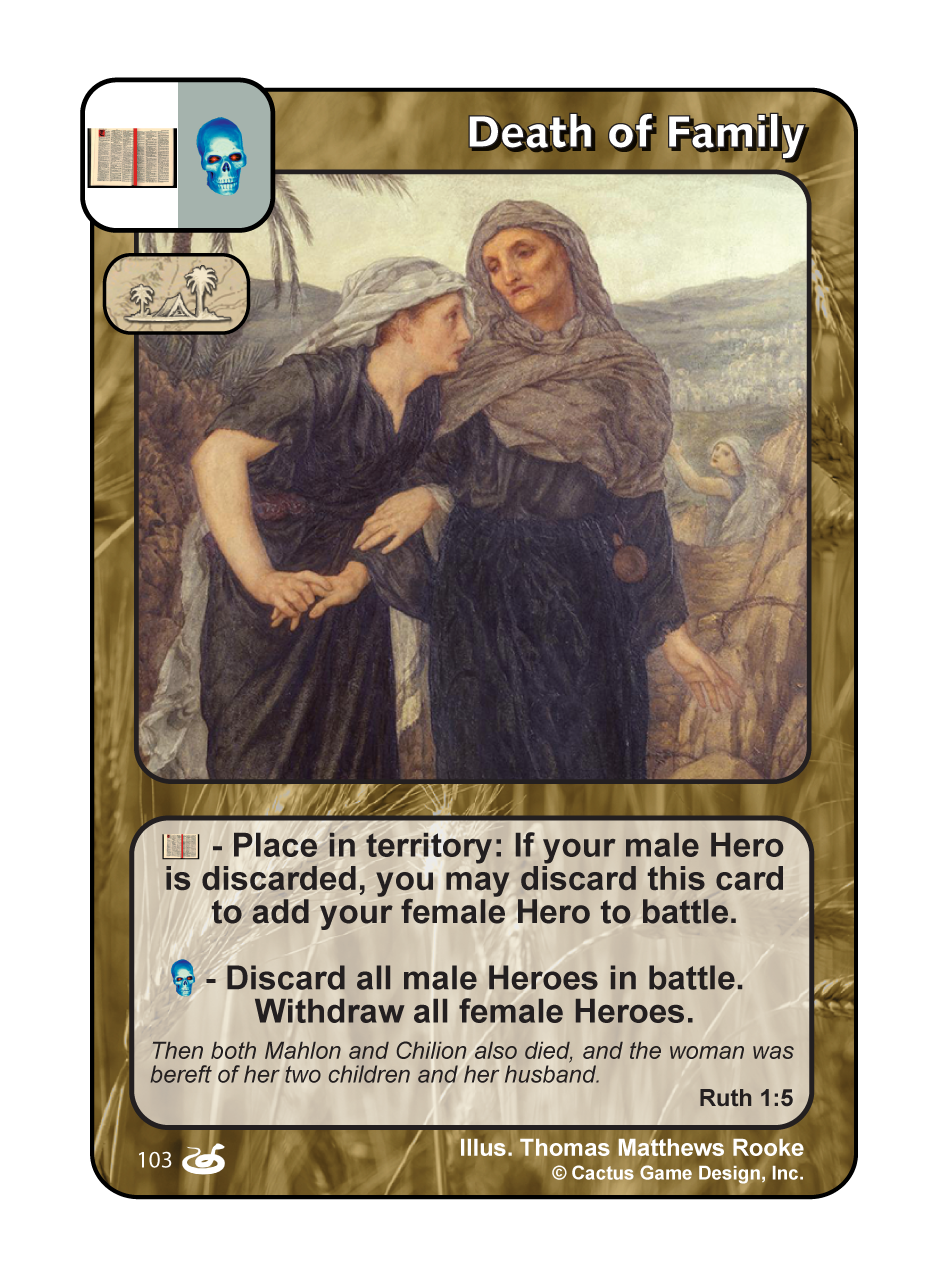 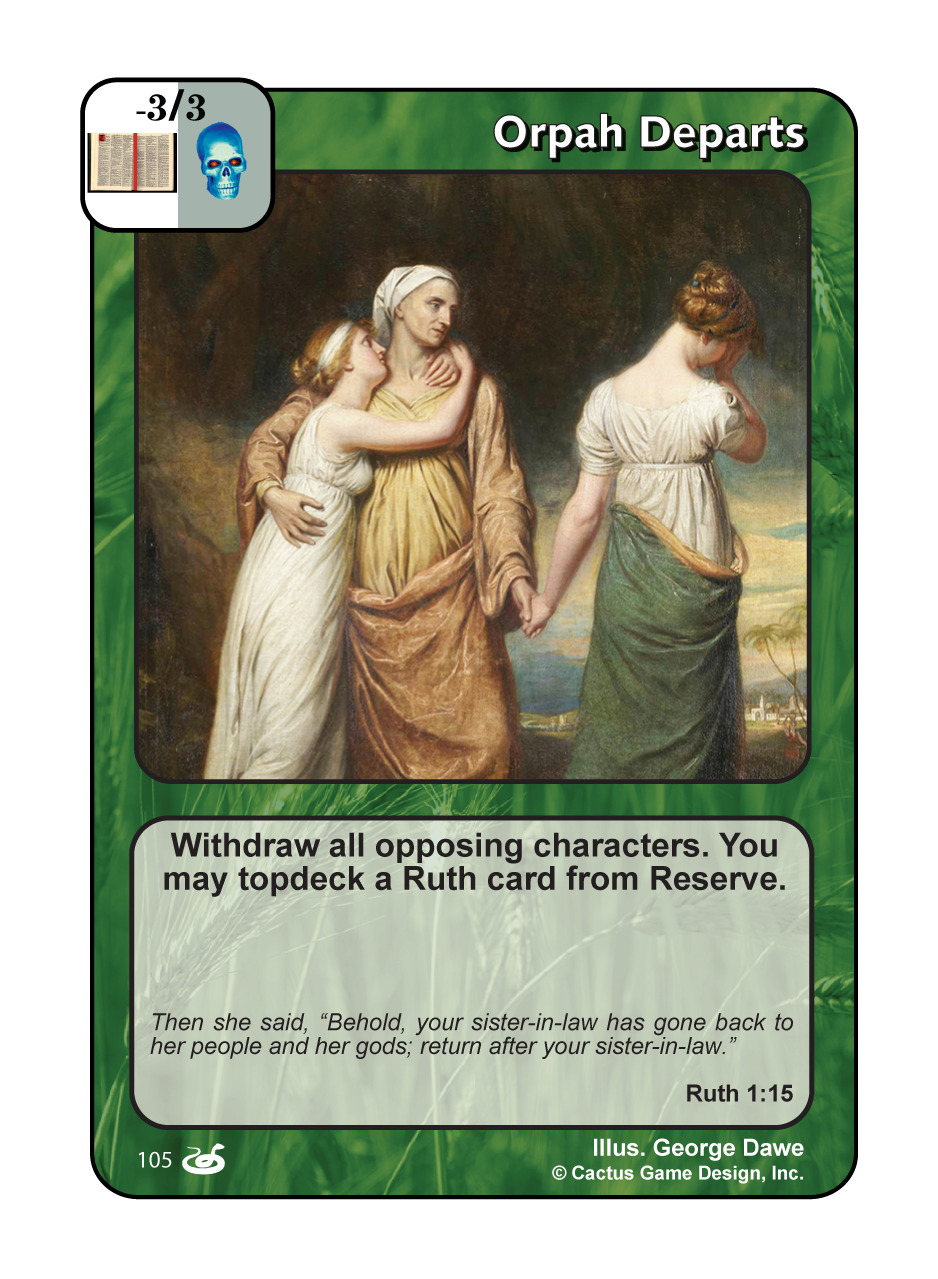 Falling Away (CoW)
Christian Martyr
[EDITED BY R.O.S.E.S]
Three Woes
The Second Coming
Angel of the Lord
Son of God

The Angel Under the Oak
Captain of the Host
Ahimelek the Hittite
Samuel
Abigail
Bathsheba
Joshua, son of Nun
David, the Shepherd
Asahel

This deck was definitely my favorite deck during playtesting – Unfortunately I can’t share all of it with you as some of the cards are being saved for later articles, but I can tell you that even this unrefined version is 2-0 against Children of Light! It’s important here to note the word unrefined – I built this list in about an hour, and didn’t change any cards (Except 1 after we made a massive tweak to it) Redemption is a very small game, and as a result, those players that are elite, top-level talent often get recruited to help produce it. That does give us a little bit of an inside track, and we’re very careful not to abuse it. We each approach the process a little differently, but most of us include the core tenant that we don’t begin to refine decks during the playtesting process. We also share those decklists openly and point out lines of play that have powerful results. We tend to play far more ‘New’ cards than actually make the cut in most decks, and play a variety of different (usually bad) decks during the process. This deck is better than most, but a large part of that stems from the fact that I’m not doing anything new with the offense. Throne decks were amazing two years ago and were probably underplayed last year. I’m not sure Moabites (While fun) are the correct pairing for a Throne offense this year, or if Moabites are a top defense in general, I’m also fairly certain I don’t have them built correctly here.

Here are some specific interactions with the new cards I really enjoyed:

King Eglon, doing beastly things! Eglon’s versatility is amazing, he got me blocks early when the opponent didn’t have enough enhancement support by stealing enhancements, blocks late with his big butt. This list isn’t designed to take advantage of his reserve access, but that’s a great attribute as well

King Mesha, there in a pinch! I’m not playing any animals, but I definitely discarded good dominants to Mesha when I was sure of victory, or when I thought I absolutely needed one last block.

King Balak, supercritical set-up card! Balaam is awesome, cards that tutor Balaam are likewise awesome. Oh, did I mention he negates O.T. heroes with a curse active? Games that I got Balak early went well, games that I didn’t were a struggle.

Orpah, chump block extraordinaire! Orpah got negated more often that I would like, but she can also set up some CM scenario’s against Ruth heroes, and is one of the Moabites best initiative options if you don’t want to use the auto-block. She’s also female, which is more important next year.

Bathsheba lets you get the late game soul from King Amaziah, or go to Jehu, another Purple/Brown King whose ability I can’t spoil yet, but at the time had a crazy side-battle ability that usually resulted in a card advantage swing. With Abigail and Bathsheba, you can almost justify playing a King Lemuel variant of the deck.

David’s Census was an unplayable card at the time, but that’s the point of playtesting, to evaluate the power levels of all cards. It’s in a much better place now but probably doesn’t make the cut in a refined version of this deck style.

Lying Spirit pairs really well with the Moabites, and we actually toned him down because of this deck. He probably doesn’t make the cut post playtesting either as Samuel is the only character that satisfies the prophet condition. At the time the Green requirement wasn’t there, so Balaam, Damsel, Oak, Samuel, and David all allowed him to work. Balak to grab Balaam and Lying Spirit triggering off him was the specific interaction that I built this deck for.

Zion was similarly toned down as a result of this testing. At the time this deck was being tested it was a totally different card. As a fortress, it allowed you to shuffle a good card into your deck each upkeep as long as you controlled a good king. (Saul is exclusively good in this deck, obviously) the site side was bad.

Moab is obviously a beast. He has great synergy with Balaam, grabbing the curses from reserve and Balaam grabbing them after use. At the time, he was a straight take. We later toned him down to exchange, making the curses not as easy to abuse.

The two Dual-Affiliation cards (Oprah departs and Death of Family) function much better in a Ruth/Moabites or Musical Moabites deck, but function as decent additional defensive battle winners here.

Cards I didn’t play with from the Moabite theme:

Moabite Marauders is definitely more of a T2 card, but his band is pretty nice, and you could certainly justify him as an option in the main deck or reserve.

Moabite Army was a straight oversight on my part. He’s clearly amazing. His only downfall is his huge numbers, but there’s a place for that as well, and with his band ability, you can grab the battle winner you need, and have a character to play it on if they have a single-target battle winner of their own.

Chemosh Worship more than likely makes the cut in a Moabite defense now. When we began testing it had Unity Moabites and required the O.T. Idol to be active to discard, I just can’t see a scenario where you don’t play Balaam with the Moabite defense, and even if I did, also needing the Idol active was far too restrictive for my tastes.

So, are Moabites the best Gray defense? I think so, and I think there’s a few interesting ways of pairing them that you can experiment with, so get to testing!