In our first preview article for Fall of Man Gabe shared with us a basis in Genesis 3, Adam, Eve, and The Serpent. But that’s only the beginning of the story. After being expelled from the Garden and bearing children man began to expand. No longer having the protection of the garden, man needed a place to live. Genesis 4:17 tells us of the first City in the Bible:

Cain had relations with his wife and she conceived and gave birth to Enoch; and he built a city, and called the name of the city Enoch, after the name of his son. Genesis 4:17 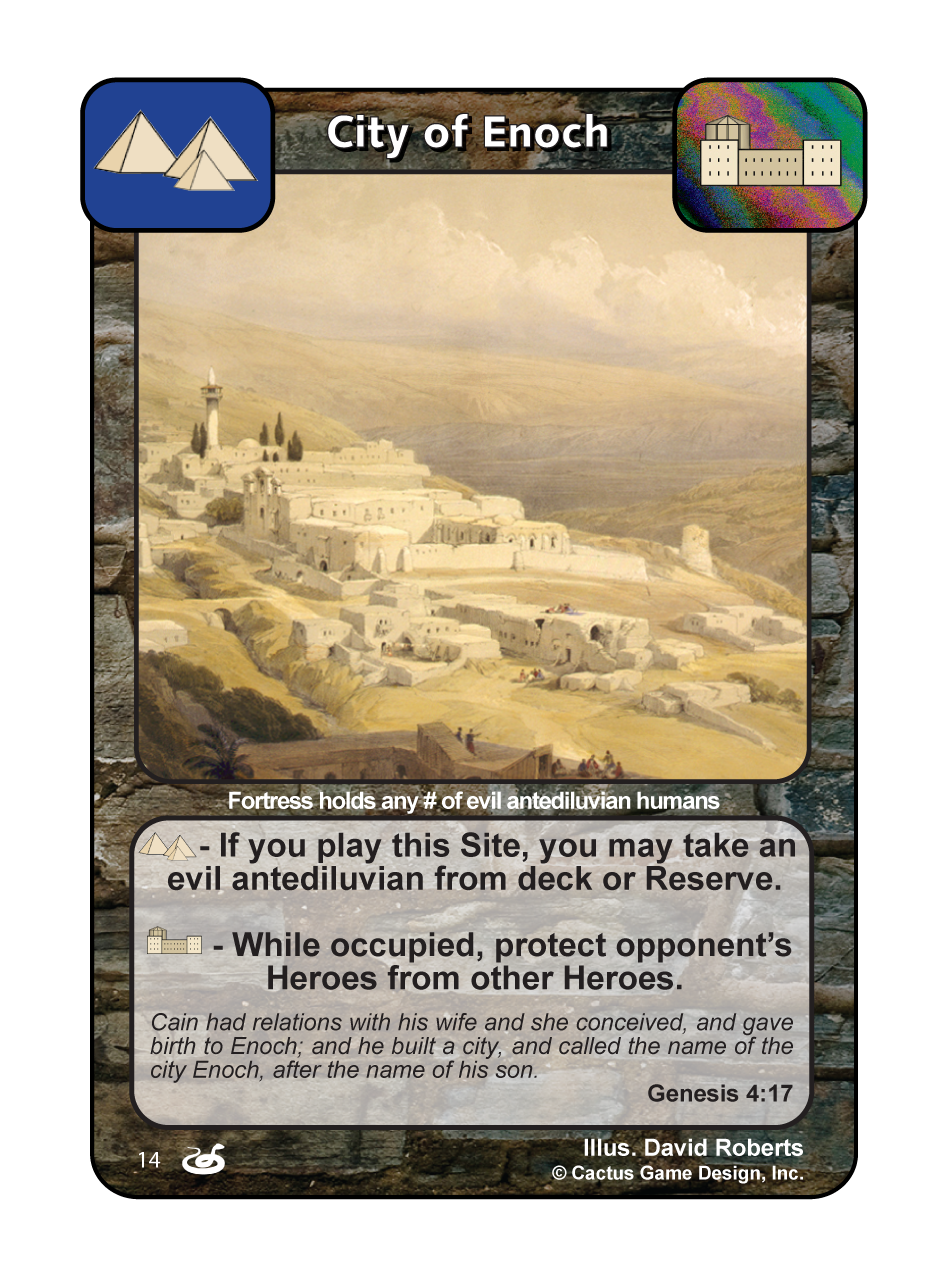 WHOA! What craziness is this? Cities are a new card type in Redemption similar to Curses and Covenants. In deck, hand, reserve, and discard pile Cities are both a Site and Fortress. Once laid on the playing surface, however, the holder must decide if they want to benefit from the Site ability or the Fortress ability. Fall of Man is the perfect set to introduce Cities as they are portrayed in the bible as places where Wickedness and Immorality breed. Genesis chapters 18 and 19 tell the story of one such place: 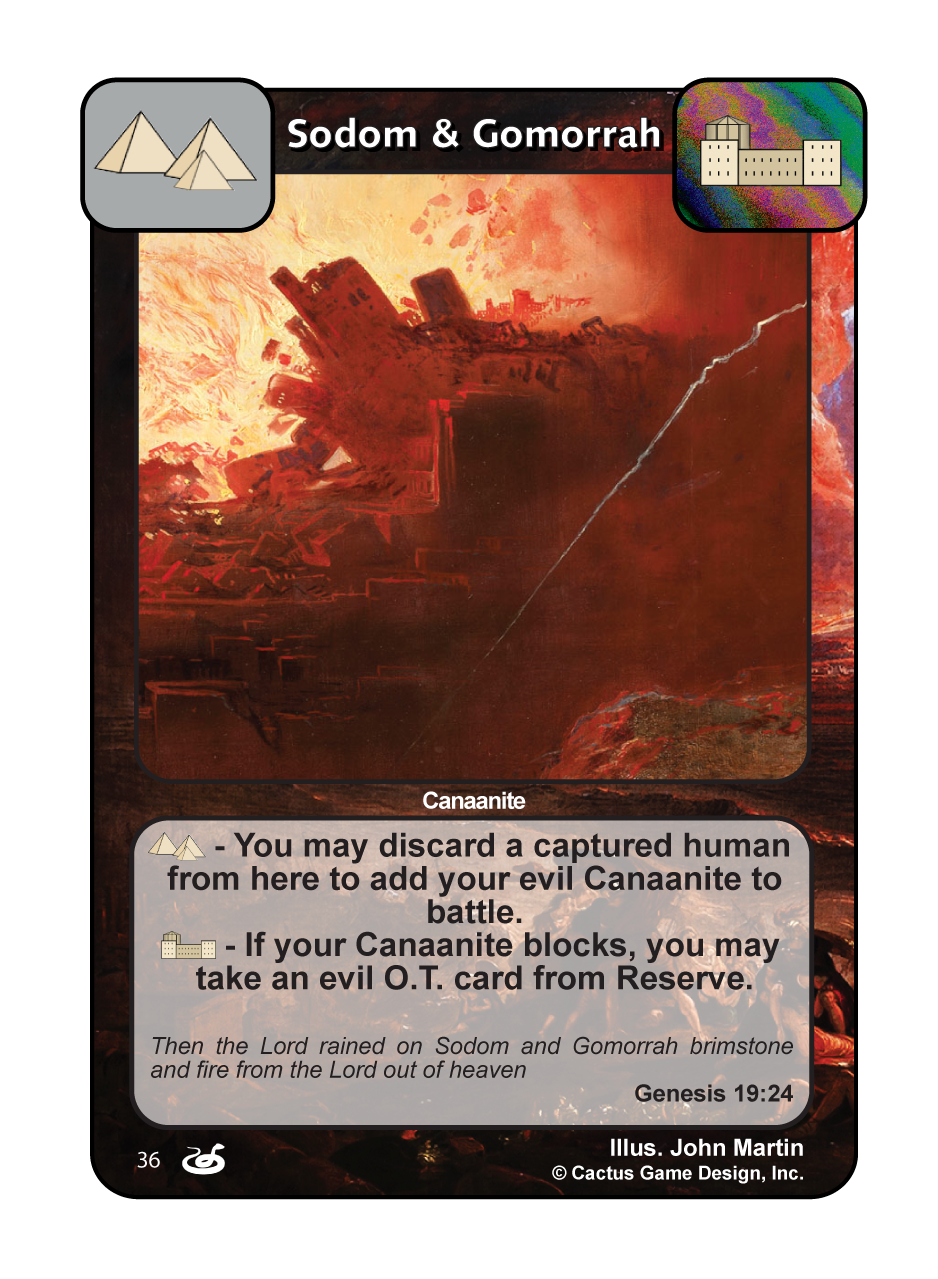 Here we have a city so full of sin that God threatened judgment upon them. God would have spared Sodom if he could find even 10 righteous men amongst it’s population (Genesis 18:26-32) The only man he could find was Lot. Thus God sent his Harbingers to destroy the city with brimstone and Raining Fire. God spared Lot and a little town Zoar which Lot fled to with his daughters. Zoar might have made a good city card this year as well – Most cities in redemption will have an evil fortress alignment because of the sinful nature they represent. However, not all cities are this way. 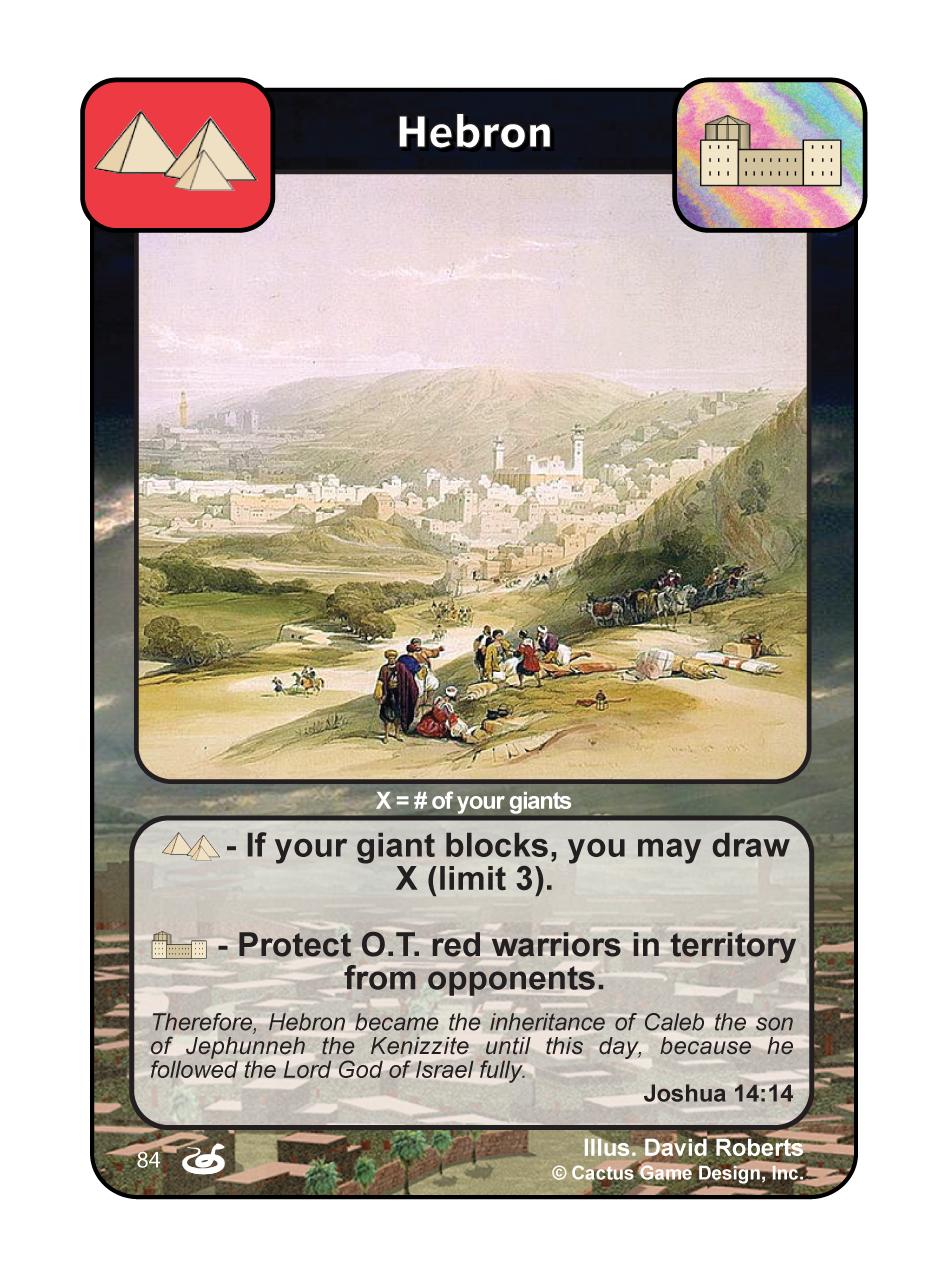 Caleb was a godly man who “Followed the Lord God of Israel fully” (Joshua 14:14) Thus his inheritance is represented by the good fortress side of Hebron, protecting Caleb and his fellow warriors from opponents. One of our goals with cities is to have really nicely balanced abilities that create interesting game-play tension and decisions. Yesterday Gabe showed you a band of brothers that can use the site side to full effect. With a defense like that, supported by that kind of speed, you might wonder why you would ever play Hebron as a fortress. Well, Gabe also showed you Gibeonite Treaty which will encourage some play with our new yet to be revealed Giant slayers, who might need that protection! 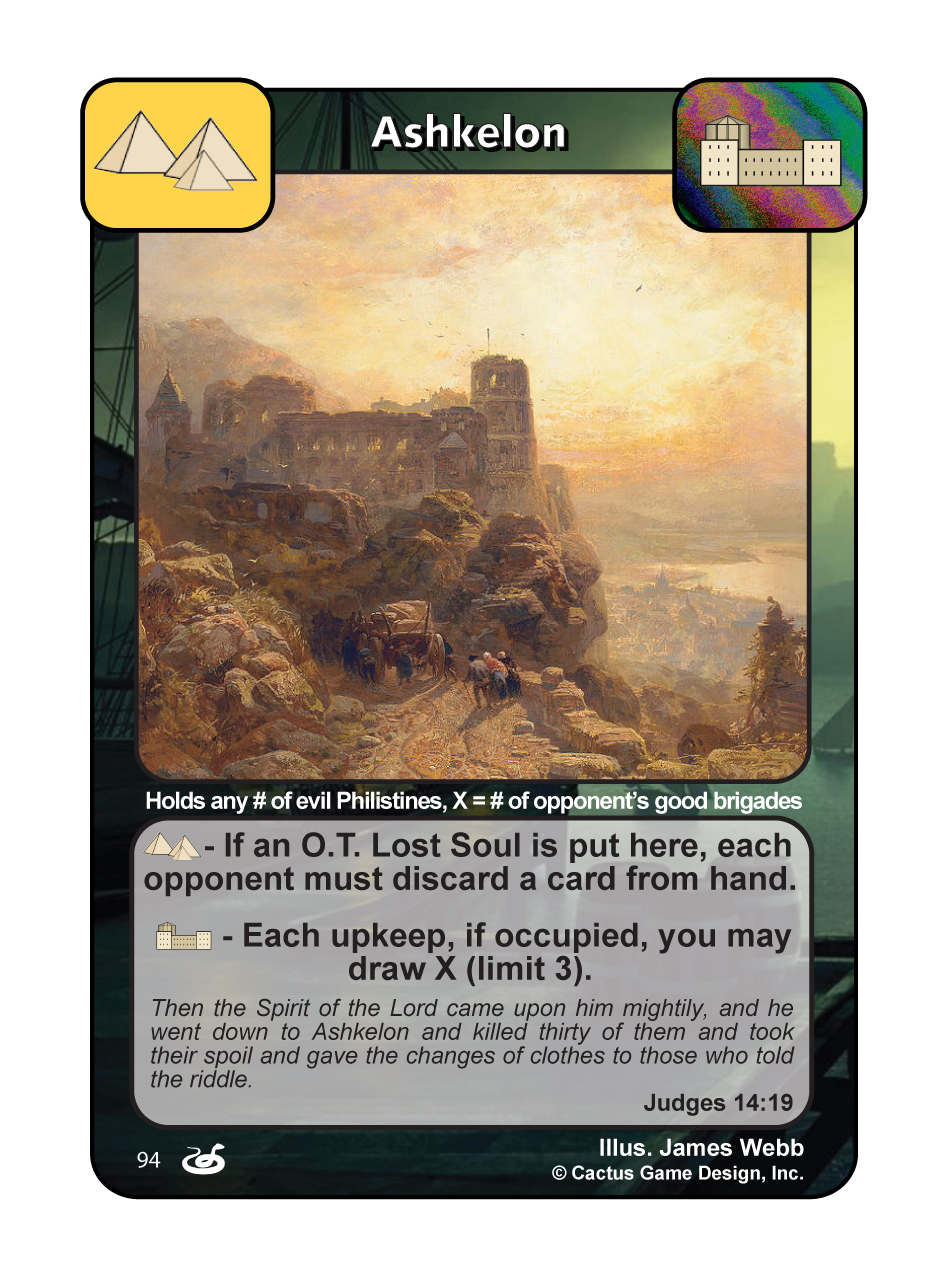 Another goal with Fall of Man is to push the meta away from splashy things like Children of Light from last season and Because of Moses from two years ago. Even against things like the Martyr deck from last year the fortress side is a consistent draw 2. If your opponent is only rolling with one brigade, the Site side will always be a good option (Unless you don’t play any O.T. souls, which might not be the right decision next year.) 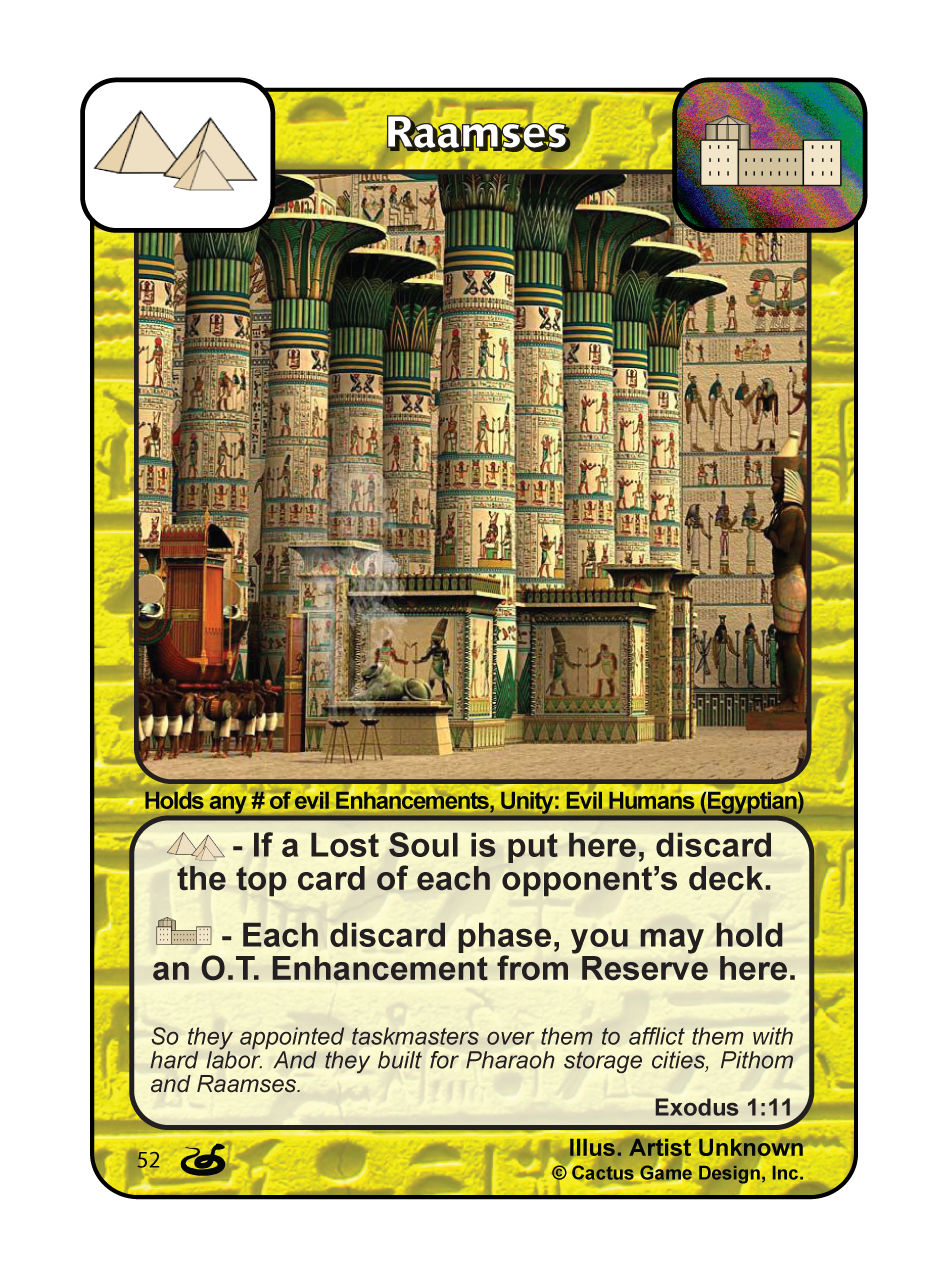 Storehouse was one of my favorite cards when I first started playing, I was a little kid, It let me keep all of my (bad) cards to use later! Now as a playtester and set designer I wanted to mimic that ability on a new card, but with a new twist. We didn’t think Pithom needed a reprint just yet, but wanted to get a city for the Egyptian theme in the set (You’ve seen Staves/Snakes and Pharaoh’s Daughter already, surely you knew we were printing a bunch of stuff for them!) Exodus 1:11 names two cities and thus Raamses was titled, some sweet art was found, an awesome hieroglyphic border representing the riches within was made and we had ourselves a card… Oh, you wanted to hear about the twist? Raamses gets Egyptians some needed reserve access by using its special ability to search reserve and hold an O.T. evil enhancement each discard phase. Then during your next preparation phase, you can snag that card back to your hand with the holds identifier. In the meantime, maybe you want to Mimicking Miracles that card during your opponent’s rescue. 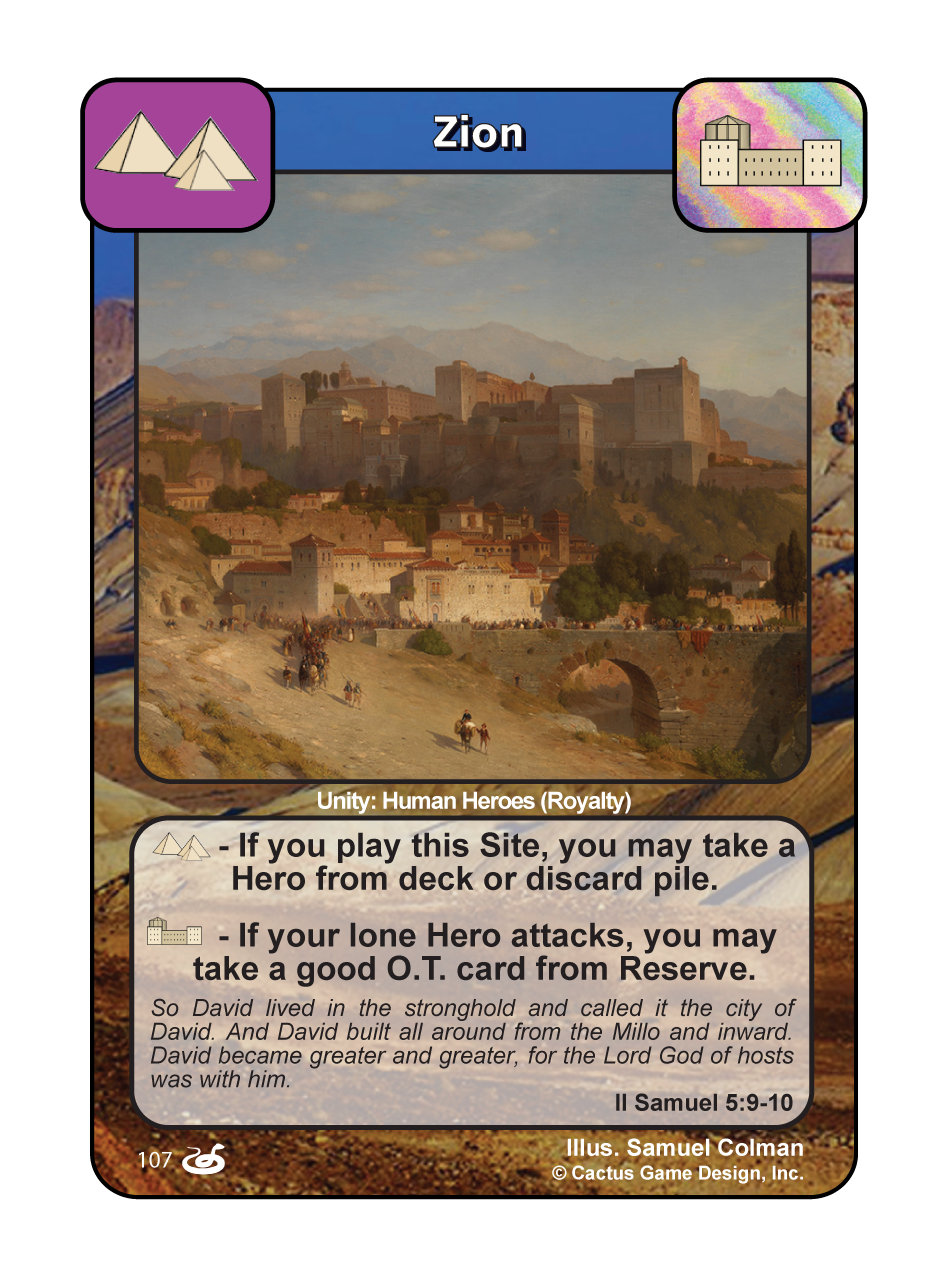 As with Hebron, not all cities are evil. The City of David increased in prosperity because of David’s faithfulness. Zion is the precursor to Jerusalem, which is itself replaced by the New Jerusalem. Even in a set exploring man’s sinful nature our ultimate goal with Redemption is to point people towards a wonderful loving God who spares the one righteous man, gifts us with inheritance for following him and increases our prosperity.

A couple additional notes on Cities:

Because they are partially a site at face value, they do follow deck-building rules for sites, (1 Site per Soul) That might be a problem next year when we introduce cities in some of the brigades we saved for the next year like Green, Clay, and Teal. This year, however, feel free to play all 7 of them. Wait, 7 you say? You only showed us 6 cards, John. – You’re right, I did – Head on over to the forums to discuss which additional city we might be printing, and what brigade we might have doubled up. Get close and I might even reveal the second ULTRA RARE for Fall of Man!

6 thoughts on “Coming soon to a City near you”