Before learning to play Redemption many years ago, I wasn’t aware there were any giants in the Bible apart from Goliath. That’s one of the things I love about this game! The obscure characters and events that are sometimes represented really spark a curiosity to dig into God’s Word. I quickly learned about Lahmi, Isbhbibenob, and Saph. Later, the Twelve-Finger Giant came along. Those 5 are hardly the only giants mentioned in scripture though.

With five giants currently in the game and the upcoming Rapha promo, that gives us six giants all of whom are Philistine. But the Philistines weren’t the only nation noted to have giants. As we were fleshing out ideas during the set design, we quickly realized that this is going to be “The Year of the Giant”.

The first giants mentioned in the Bible are in Genesis chapter 6, the Nephilim. There are a good number of interpretations as to who the Nephilim are and what they represent. I apologize in advance if we aren’t representing your interpretation. That’s one reason we hesitated to print this character in the past. The one thing I’m fairly certain about is that the Nephilim are not what was depicted in the movie “Noah” (if you haven’t seen it, don’t waste your time). 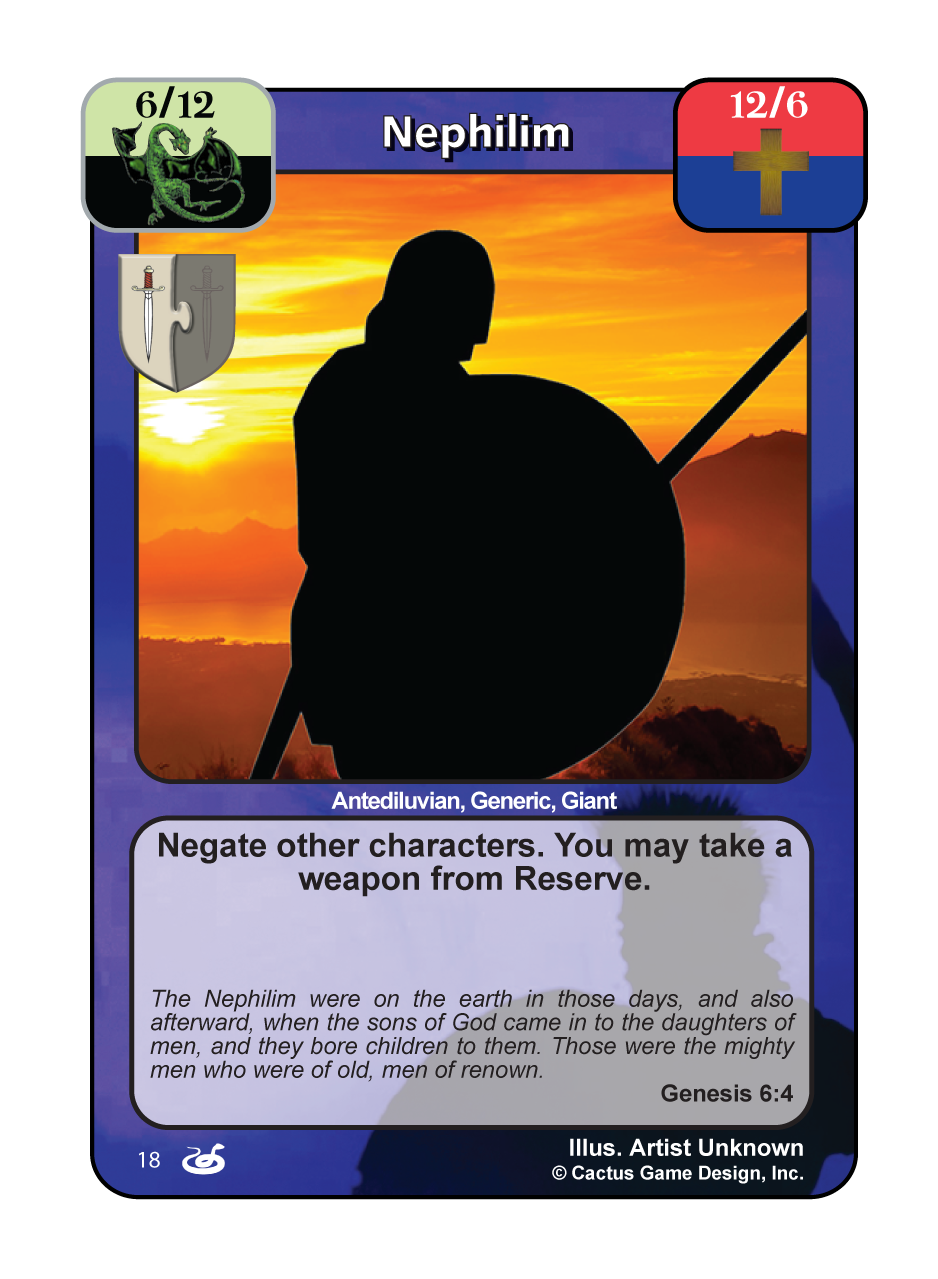 Because we cannot be certain about the nature of these “Heroes of old” we’ve made them a dual-alignment character. As a Genesis Hero they have blue and as a warrior they have red. On the evil side, we’ve chosen to use black for all giants and as an antediluvian pale green.

The Nephilim were among the most valiant warriors of their day! To represent that we’ve given them the ability to negate all other characters. Adding a pseudo-FBTN character to these four brigades is an instant boost to all 4 brigades represented on this character!

During testing, I’ve really enjoyed being able to take any weapon I want from my Reserve regardless of the alignment I’ve chosen for Nephilim. It makes me want to find room for Sword of the Spirit (CoW) and Every Man’s Sword (CoW) in my Reserve whenever I’m playing this guy! I’ve also regularly grabbed Two Thousand Horses when playing Antediluvians.

The scriptures speak of a giant named Anak who had 3 sons. This family is notorious for settling the Canaanite city of Hebron. If you’re a long time Redemption fan you might be familiar with the PC game Victory at Hebron that focuses on this topic.

When the Israelites spied out the Promised Land and 10 of the 12 spies gave a negative report out of fear, it’s likely that these men were at least part of the reason for that fear. But Caleb and Joshua were not afraid!

While we won’t see a card for Anak this year, his three sons will be joining Redemption! As brothers who are always mentioned together in scripture, these guys are going to work closely together. 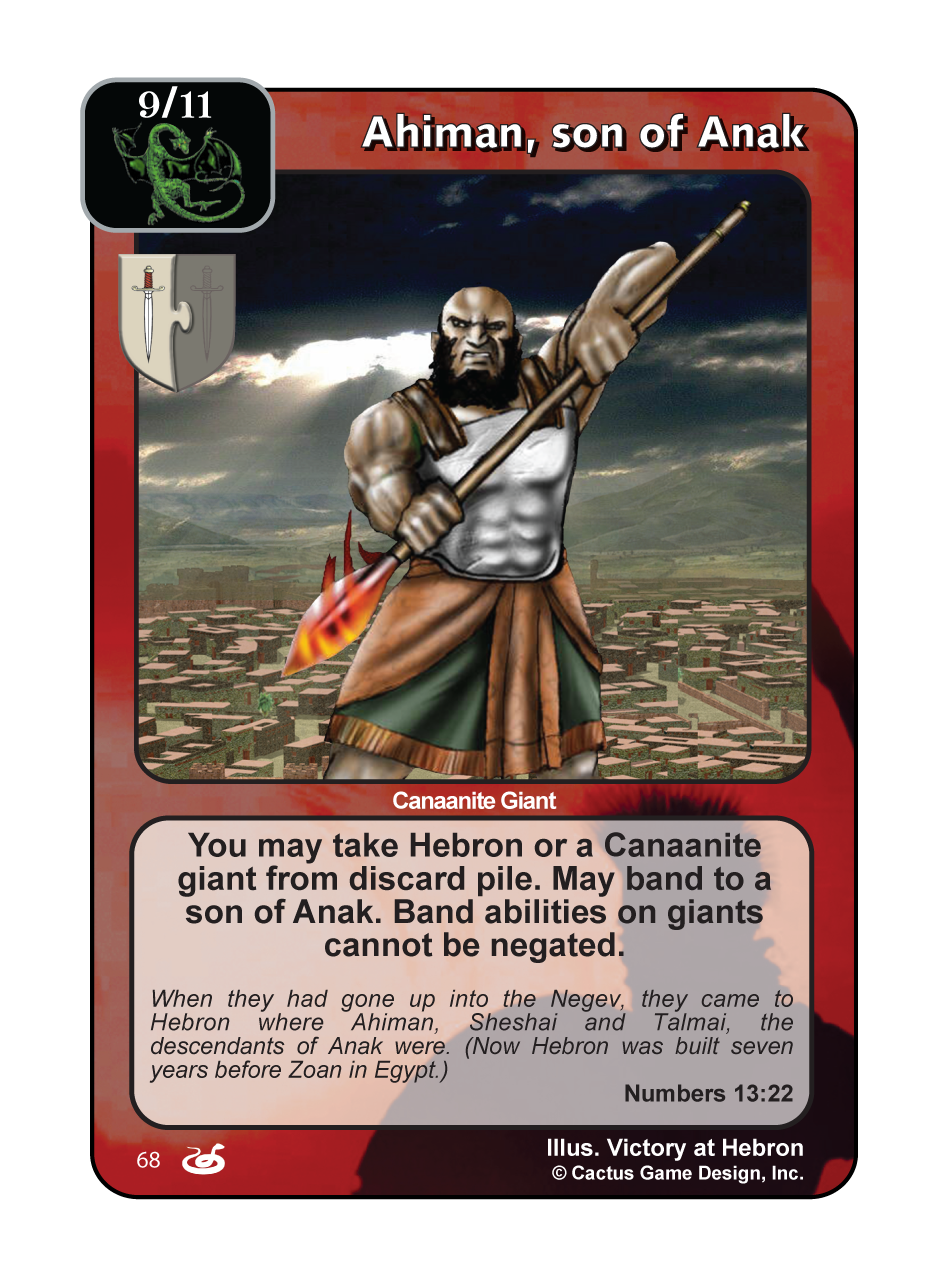 I’m not at liberty to spoil Hebron today but let’s assume for a moment that it works really well with giants. Ahiman will make sure his brothers don’t stay discarded, meaning you’ll want to target him first if you’re trying to take down the sons of Anak. He also gives a nice boost to a giant banding chain! 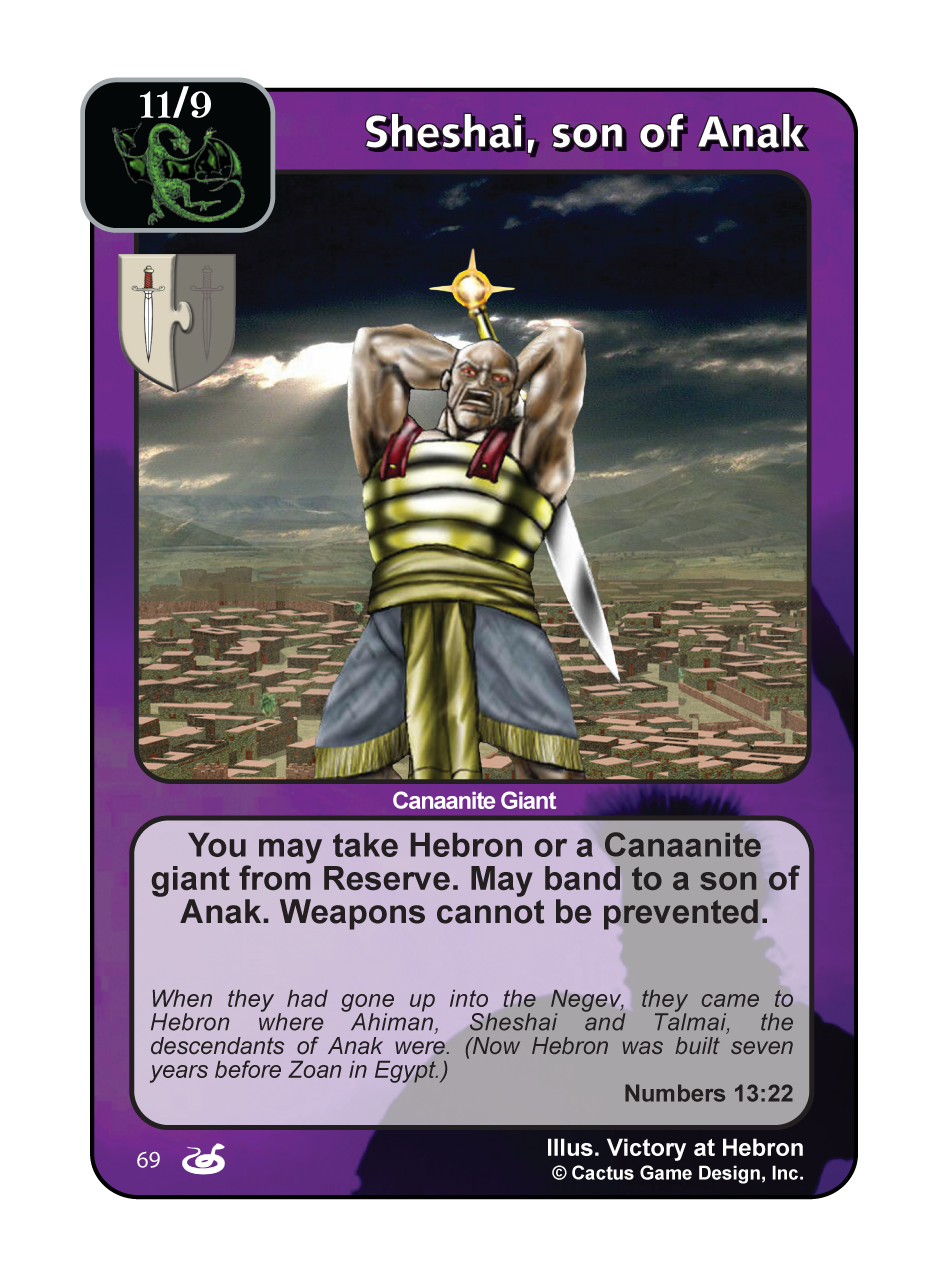 Like his brother Ahiman, Sheshai can access a location but his target is the Reserve instead of the discard pile. Giving a boost to weapons with CBP is situational but something you’ll be thankful for when you need it! 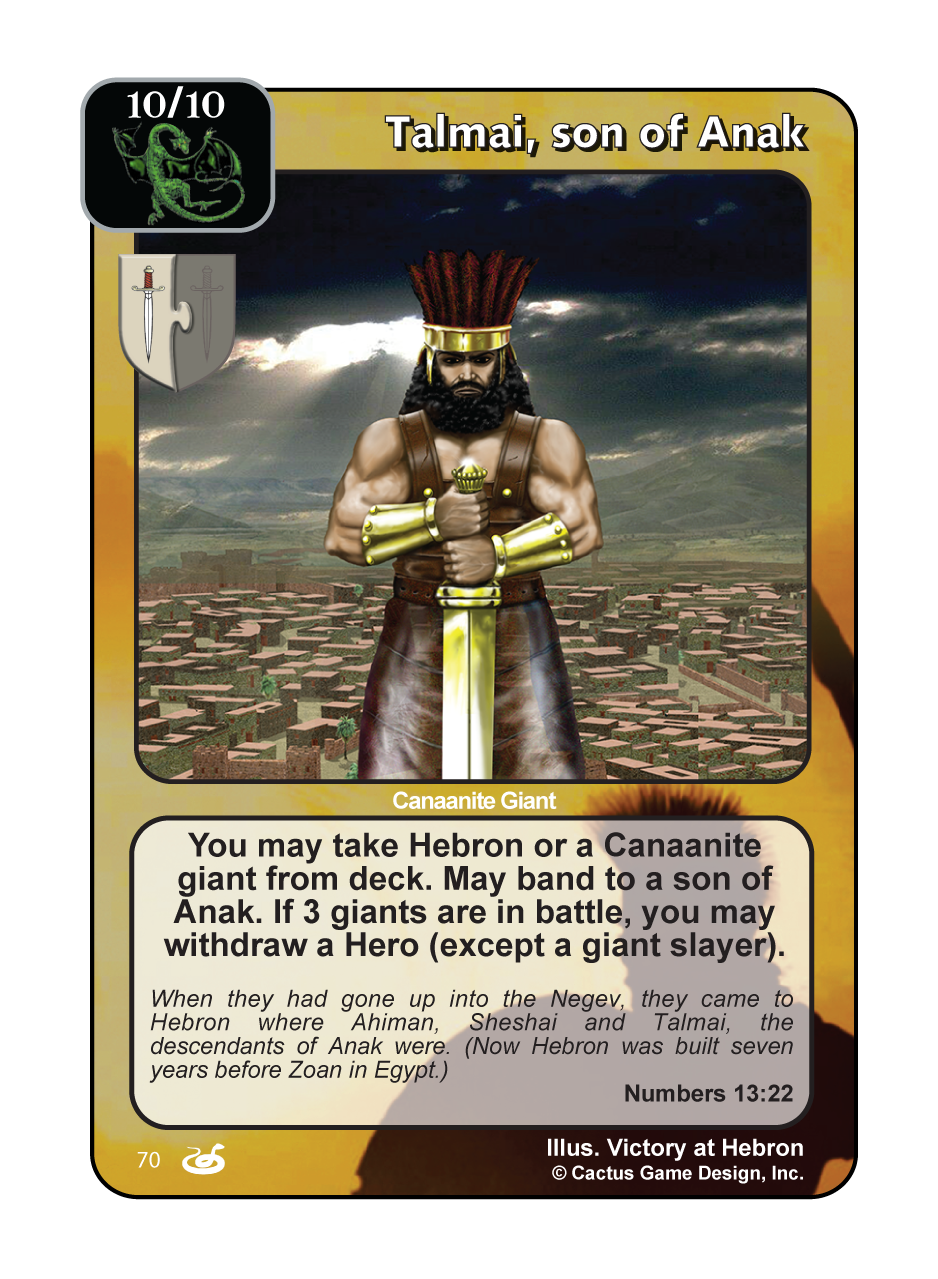 Similar to his brothers, Talmai can grab a giant or Hebron, only from deck this time. When making a son of Anak banding chain, if you can end with this guy, you get to withdraw a Hero. Thematically, if that Hero is a giant slayer, he’s not going anywhere.

As you might be able to imagine, once they’re up and running, the sons of Anak are a force to be reckoned with! But they aren’t the only giants that Israel ran across during their journey to the Promised Land. There were also said to be giants in the land of Moab.

Not a great deal is known about the Emim which gave us the freedom to make them work with either giants or Moabites. Before “The Fall of Man” goes to print the only Moabites in the game are Foreign Wives and Orpha (Pa). 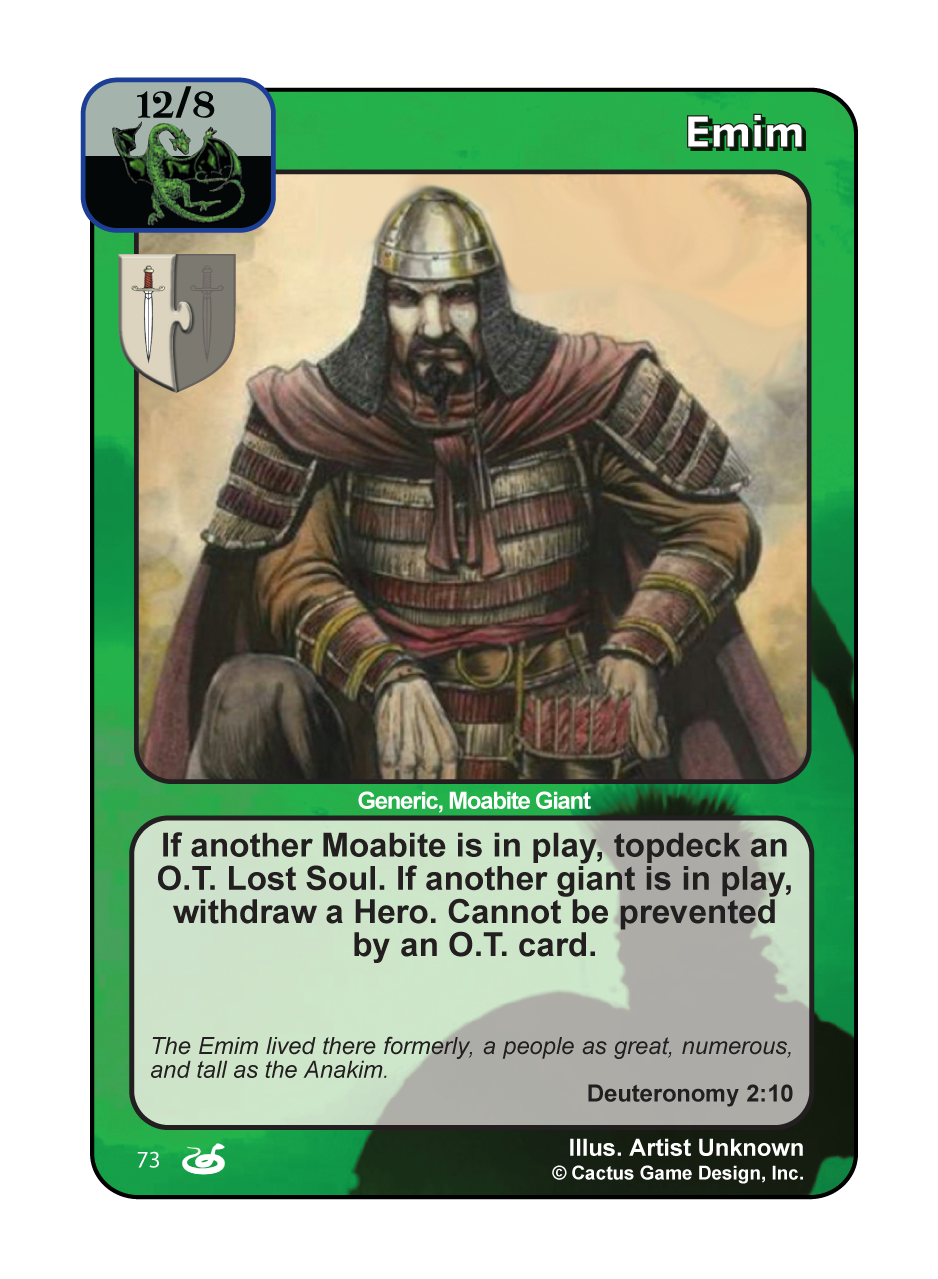 Withdrawing characters was used to represent “striking fear” on Goliath (P) and something we also did on the sons of Anak. Emim uses that ability again but requires another giant to be in play. That shouldn’t be too hard to pull off with the “giant” selection players now have!

Topdecking an O.T. Lost Soul can provide multiple benefits. In T2, removing the chosen Lost Soul from play is an instant block if they cannot negate his ability. In T1 it’ll only be a block if it’s the only soul you have at the time. But there are a number of Lost Souls that will provide a nice benefit when you redraw them! Without mentioning any of the new Lost Souls, here are some of my favorite plays with the classic ones.

Topdeck a Wanderer Lost Soul that an opponent has given me.

Topdeck my deck discard Lost Soul so I can use it again.

Topdeck an opponent’s Hopper when I have a way to pull it into play before they draw it.

Use the Shame Lost Soul over and over.

The most obvious use is to get the 2-liner or 3-liner out of your territory so the opponent can’t get a 2nd rescue!

Anak and his sons aren’t the only giants that were found in Canaan. Moses and the Israelites ran into hostility from a huge king named Og! 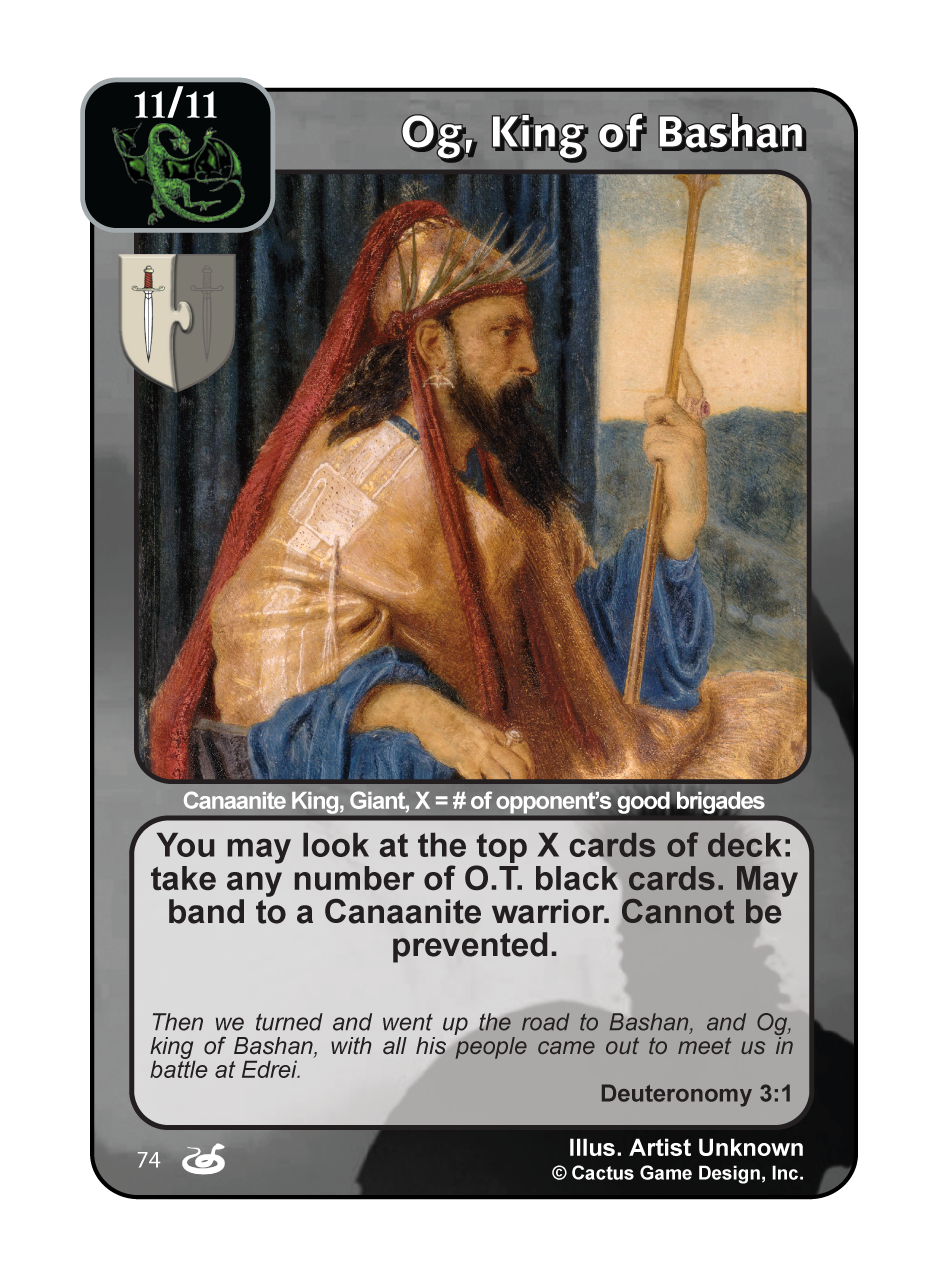 If we only gave you a bunch of giants and no support you could build an all giant defense but it might not be as effective. And while a giant based defense might not be the next to win Nationals we do hope that it’ll be something that’s fun and effective to play.

Even though I can’t share all that Hebron does with you, I can tell you that is says “If your giant blocks, you may draw X (limit 3).” And X is the number of your giants. Between that, the sons of Anak grabbing one another and Og digging through the top of your deck a giant defense should be able to keep up with most offenses.

With so many large characters you’ll probably need quite a few interrupt and negate cards. Fortunately, black has several to offer and it is getting more! If you’ve been on the forums you might have caught a discussion about redirect cards. This one is a staple in my giant themed defense. 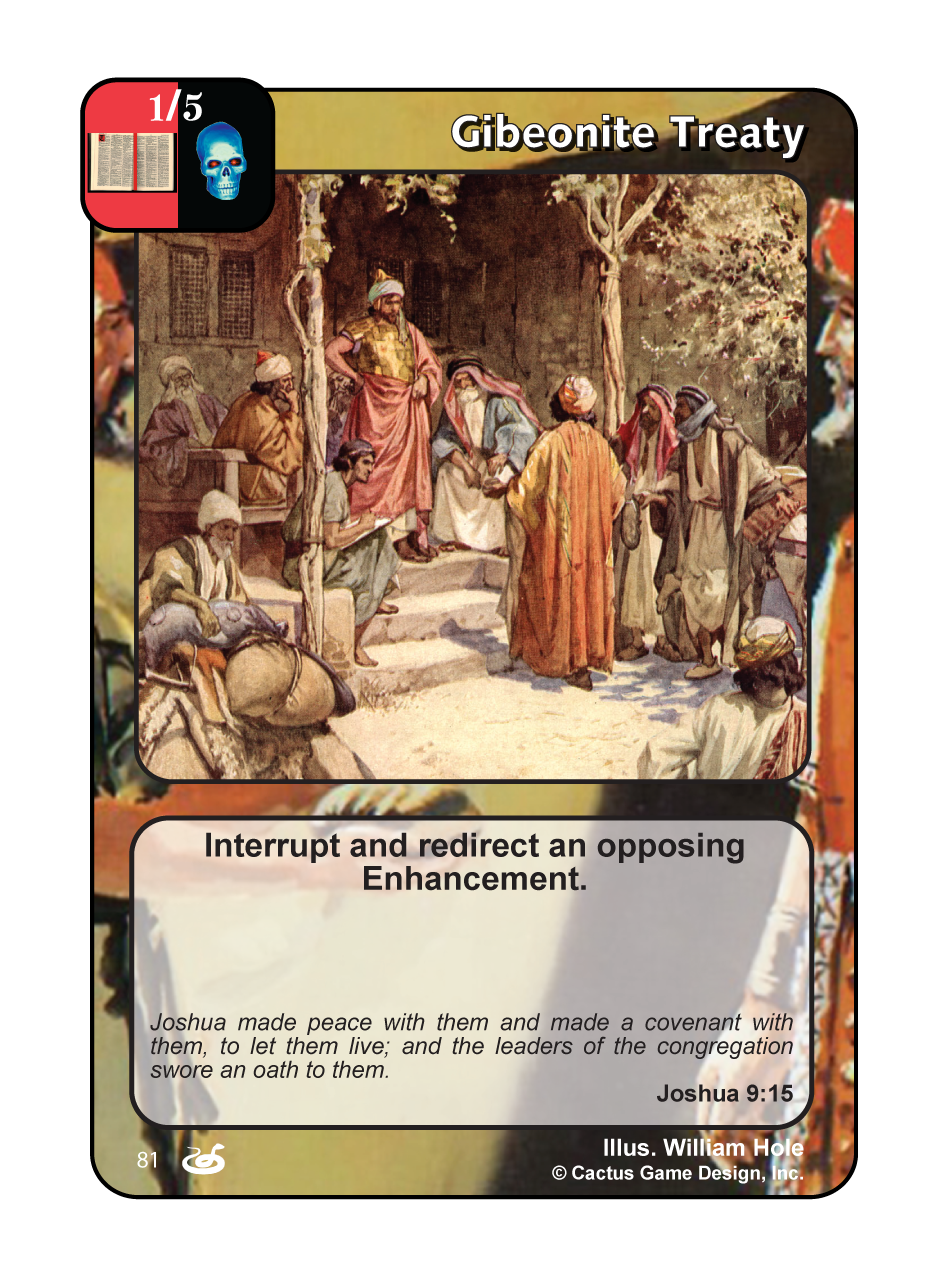 Redirect abilities can create some really fun opportunities. Instead of just stopping the opponent’s card (with a negate) you get to use the ability, hopefully to your advantage!

I know players have found redirects to be confusing, but I don’t think that’s because redirect is actually confusing, but because it’s a seldom used ability and 2 of the 3 previous redirect cards are very old and worded poorly.

This won’t answer every question you have about redirect but to sum it up “the redirecting player gets to carry out the ability instead of the player who actually played the card”. Let’s look at a few examples.

Your opponent plays Striking Herod. You redirect it. Your character gets the 7/0 instead of the Hero and you get to choose the male, human Evil Character that gets discarded!

Your opponent plays Word of Their Testimony. You redirect it. You get the 3/3 stats, choose the human to underdeck and the demon to negate and banish.

Your opponent plays Faith of Samson. You redirect it. You get the 5/2 stats but discard all Evil Characters in battle is still the same so your blocker is discarded.

Hopefully, that helps redirect make sense and shows how sometimes a redirect can be much better than a negate.

To Slay a Giant

With all these new giants running around, it’s only right that we get some new giant slayers to help combat them. But that’s another article that one of my peers will be sharing with you.

Until next time, keep your eyes out on the Cactus Game Design forums and here on Land of Redemption for more Fall of Man spoilers!

4 thoughts on “Year of the Giant”