With each new set often come new card types, new game mechanics, and/or new identifiers. In this
article, we will introduce a new identifier that you will find on several cards in the new set: The “Unity”
identifier. This identifier will serve as shorthand for an ability requiring you to have certain cards in play
in order to activate the ability.

Let’s look at an example of a past card that, if reprinted with the same ability, would use the “Unity” identifier.

Emperor Caius Caligula (TEC) says “If blocking and all your Evil Characters are Roman, you may negate
and discard an Artifact, Site or Fortress in play or set aside.”

If Emperor Caius Caligula were reprinted in the new set, he would look like this:

Emperor Caius Caligula
Identifiers: Roman Emperor, Unity Evil Characters (Roman)
“If blocking, you may negate and discard an Artifact, Site or Fortress in play or set aside.”

Based on Caius Caligula’s example, you can probably deduce that a Unity identifier has 3 parts. First, the
word Unity (obviously). Following the word Unity is a card type to be “unified”. In this case, it is “Evil
Characters”, although for other cards it could be Heroes, Artifacts, Lost Souls, and so on. And third,
in parentheses, there is an identifier or set of identifiers that the preceding card type needs to be “unified” by.
Caius Caligula requires Evil Characters to have the “Roman” identifier; other cards might say OT Red warrior,
minor prophet, NT human, etc.

So what are the benefits of creating a new Identifier when we’ve been able to do the exact same thing
for years in the special ability? Well, there are two primary benefits.

First, Redemption cards’ abilities are constrained by space. Generally, 5 lines of ability text are all we
can get out of a card’s ability. Anything we can move from the ability lines into the Identifier lines gives
us more freedom with our special abilities, even if it won’t always be needed. In Caius Caligula’s
example, his ability was just a little over 3 lines of text – so moving some of that text into a “Unity”
identifier wasn’t necessary to fit the ability on the card. However, the Unity identifier is looking towards
the future. It will enable us to make longer abilities become reality when before they might not have
been possible.

Second, the Unity identifier is by definition restricting. The whole ability won’t activate unless the Unity
clause is true at the time of activation. So what does this mean? Redemption players know that any
time your cards might not work when you want them to, that is a major drawback. Top decks need
consistency – when you put a card in your deck, you expect it to provide value a high percentage of the time.
In this sense, Unity identifiers are a double-edged sword; you have to build your deck to take
advantage of the Unity identifiers you want to activate, which hurts you. However, special abilities are
designed to be balanced and on a somewhat level plane in terms of power. This means that abilities
with Unity identifiers can be increased in power. And the more restrictive the Unity identifier, the more
potential power can be squeezed out of the ability while still being a balanced and fair card. You will see
this on some of the cards in the new set.

Speaking of Unity identifiers on cards in the new set… Why don’t we take a look at a few right now? 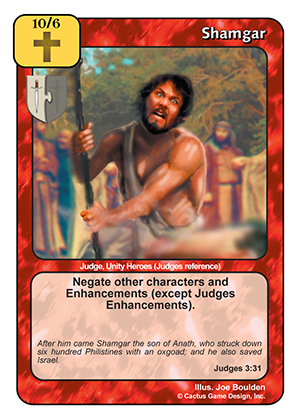 Shamgar’s stats have been boosted to 10/6 from his last appearance in the I/J starter decks. He is also
sporting a special ability this time around. Shamgar has a classic “fights by the numbers” special ability,
except that he doesn’t negate Judges enhancements (good or evil). So what’s stopping you from splashing this into a
deck already featuring Joshua, Captain of the Host, and Moses? The Unity identifier! Shamgar’s
ability only works if all your heroes have Judges’ references. This means that Joshua, Captain, Moses,
Samuel, and other popular “The Deck” heroes will turn off Shamgar’s ability. 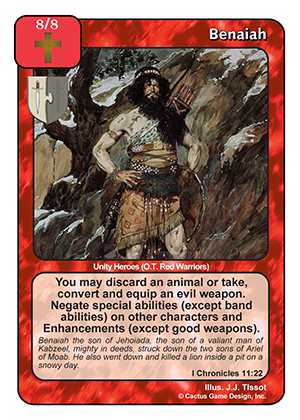 We finally get a Benaiah reprint in Red brigade! This represents Benaiah’s time in Israel’s army as one of
David’s Mighty Men, portrayed by his Unity identifier requiring all of your heroes to be OT Red warriors.
His ability is actually more like Captain of the Host than Benaiah’s old Kings ability. Benaiah lets you cap
off those awesome Red banding chains with a Red FBTN hero now, and he loves to be banded into
battle with cards like Battle Cry or Not Alone. I’m guessing Bravery of David played on a lone Benaiah
will also be a thing!