Lately there’s been a lot of focus on big tournaments, top decks and awesome new combos from Revelation of John. All the excitement is with good cause, but today I’d like to take a step back to something a little more relaxed. Over the course of play testing cards change, then change again… and again. I’m going to share with you some things that might have been if changes hadn’t taken place.

Cards That Almost Were

Some cards simply don’t make the final set list for a number of reasons. It’s possible that some of these may see print some day but probably not in their current form.

In the early stages Revelation of John was very heavy on “support cards” such as Sites and Artifacts. In addition to Patmos, we started off with a three brigade Site for each of the seven churches. We realized the set had too many “mini-themes” and decided that the seven churches needed to be cut to make room. Here’s a sample of what the Pergamum reprint could have looked like. 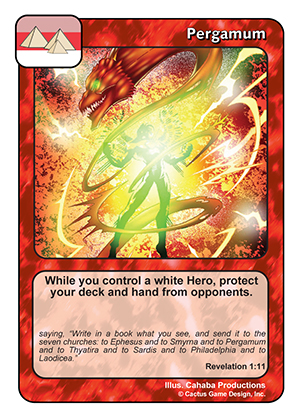 The special abilities on the seven church Sites never made it to testing since they were cut before we were very far along. But with another 7 multi-brigade Sites in the set and an entire mini-theme based around the churches and martyrs we also had this Artifact on an early Revelation of John list. It also expands the “rescue mini-theme” with an ability similar to Faith of Enoch. 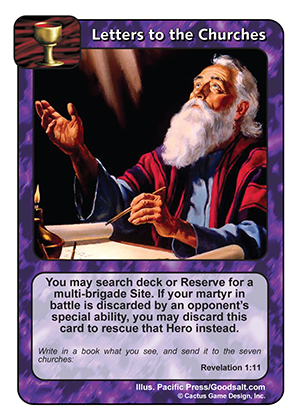 Along with the seven churches and Letters, we had a card dedicated to the man thought to have delivered John’s letters. If my memory is correct, he might have been the last piece to get cut. 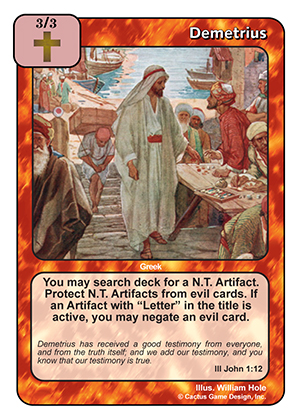 We really had a ton of Artifacts on the preliminary list too. We felt that the Heavenly Temple theme needed to be our primary focus leaving some casualties like the card below. I really like the ability on this card though, so maybe it will see print on something else in the future. 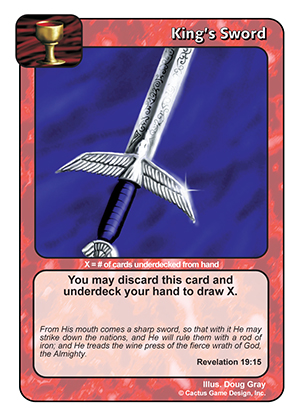 The Book of Life was originally cut from the list. We had not yet realized that it is a Heavenly Temple Artifact and the ability was similar enough to Eternal Covenant that we didn’t feel it was needed. 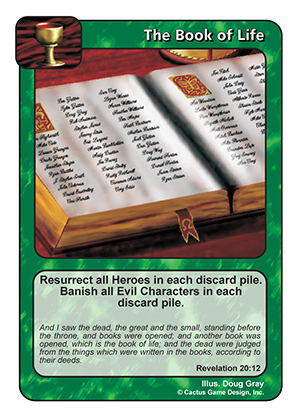 Another card that loosely tied to the seven church theme actually joined the set list midway through testing. But when we couldn’t find free art for the card, since it wasn’t foundational to anything we were doing in the set we decided to move the ability to The Book of Life, bringing it back onto the set list. 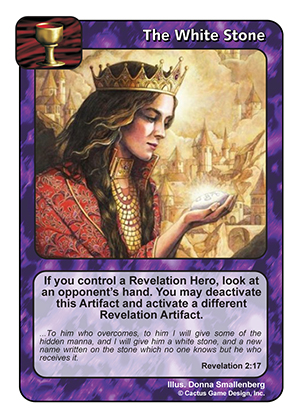 Before I show you this next card it deserves a little back story. An early version of The Great White Throne had a crazy powerful ability! I think it was something along the line of “While you have 1 of each single brigade good and evil character in your territory, you may duplicate a phase of your turn.” That’s hard to pull off but game breaking when it happens. Apparently in the rough draft of the set list we felt that it needed some help from this card. 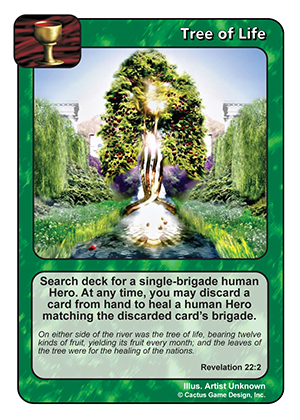 The last card I’ll share with you today was cut about midway through testing. In this instance some people weren’t comfortable using the new keyword “resurrect” to apply to a demon. Since the card isn’t crucial to anything we were doing in the set we opted to cut it. I believe it was replaced with one of the Job theme cards. 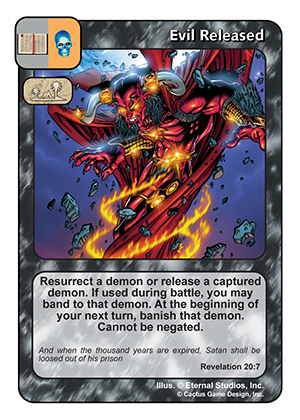 My original inspiration for writing this was cards whose art changed. It seems I didn’t even get to any of those today! I guess you’ll have to check back next week for part 2 if you want to catch the story behind cards like “Buttface”, “Cowboy” and “Poker Dogs”.