The honor and privilege to create a card for this game we all love isn’t something to be taken lightly. It’s a treasure sought after by many players, whether competing at Nationals for one of the three “create a card titles” or through posting a creation on the “New Card Ideas” forum hoping the play testers will take notice and be inspired. It’s certainly something I had desired and sought after early in my Redemption career. I’m probably the only Redemption player in existence that wasn’t absolutely giddy about winning this opportunity. How could that be?!! Certainly I thought that that having a card that was completely mine would be awesome!

What’s so Challenging About Making a Card?

During the time that I was supposed to create and submit my card to our play test team I was also heavily involved in creating and shaping the still-forming Revelation of John set. My Bible study, my game based thinking and my focus was on the scripture we were covering for the set and the things we wanted to accomplish. To be honest I didn’t know how we were going to even come close to duplicating the success of Cloud of Witnesses and I had put too much pressure on myself. I was having a really hard time removing myself from all of that to focus on creating a card that I wanted to represent my T1-2P win in 2016.

John’s 2015 winner card Confusion had such a game changing impact that we had already put some proactive counters in RoJ. The problem with those is that they provide no way to deal with an early game Confusion. In fact, there was no way in the game to deal with an early Confusion at all once it’s happened. I knew that we really don’t want to ever be able to get back cards that are removed from the game (now called “banished”). But what if we found a really good reason to do it?

John 16:23 says – “In that day you will not question Me about anything. Truly, truly, I say to you, if you ask the Father for anything in My name, He will give it to you.”

Anything means anything, right? So I can literally get anything I want from my collection, or even something that has been banished? Should it even be able to get evil cards? To quote the movie Evan Almighty:

Those opportunities sometimes come in the form of things we represent in the game as “evil”. Bad people, difficult circumstances and trials of all kinds can be forms of God answering our prayers! Not all things are good, but God promises to work all things out for good!

“And we know that God causes all things to work together for good to those who love God, to those who are called according to His purpose.” – Romans 8:28

This card was starting to sound like something I can get excited about! I even had a sweet piece of art from my friend Pat whose wife is very talented! I took the idea to the team. I’m pretty sure they thought I was crazy. 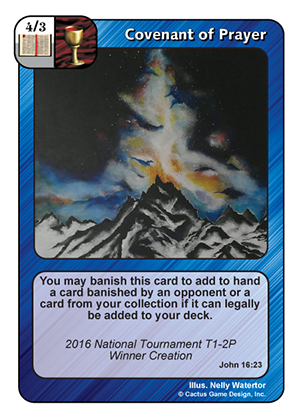 We talked through some of the implications of getting any card from your collection. It quickly became apparent that it wasn’t practical for tournament play. They also correctly told me that player created cards cannot do new things that require game rules to be created just to function (many rules would need to be added to deal with getting a card from your collection).

While my card was rejected, it sparked a discussion that led to the creation of the Reserve! We had been leaning towards rescue abilities being one of the big things in RoJ but those are extremely difficult to pull off without being broken. The idea of introducing a pseudo sideboard to the game had us all excited!

Back to the Drawing Board

I was disappointed but the team was correct. My focus was still on the RoJ set design so I thought I’d try something out of the ordinary – let the community create my card! The Community Card Creation project started out as a way to let the Redemption community decide what my winner card would be. But that also took an interesting twist. The community was split 50/50 between two cards.

Justin approached me and asked why we couldn’t just let the players create two cards. He didn’t know my hidden agenda at the time. He suggested we use them as promos later in the year. As usual, it was a brilliant idea. You guys did an amazing job coming up with The Watchman and Paul!

There I was, still left without a winner card. I looked back through a catalog of ideas I have. Many of them are from a time prior to being on the elder team. There was a concept called Children of Light that I was very fond of. I toyed around with that concept and come up with an early version of the card you know from RoJ, but when I got it to a point I felt was finished it really didn’t feel like a “winner card” to me. I still really liked the idea so we put it in the set.

The Fourth Time is a Charm?

If you’re counting, that’s three failed attempts to come up with a viable winner card. The next idea came to me while I was hosting a tournament for my play group last fall. I’m a big fan of Lost Souls with awesome abilities because of the strategy it creates in the game and because they are one of the most easily countered card types. I especially like Lost Soul cards that cannot be negated, although we have an unwritten rule that we don’t use “cannot be…” abilities on Lost Soul cards.

Fight by the numbers got really strong in the meta again last year, due in part to the introduction of Coliseum. I was really excited about the idea of a Lost Soul that could counter FBTN and that could not be negated by Moses! This is how the “humble” Lost Soul was born!

For the next couple months of testing the “humble” Lost Soul was my winner card. It was my fourth attempt at coming up with something, the third card I actually created to fill the role and the second one I submitted to the team. We were all really happy with it and very little changed about the card over the course of testing.

Wait. That’s Not Your Winner Card.

If you’ve paid attention to the spoilers you know that the “humble” Lost Soul is not one of the winner cards.

After we created the Reserve, Covenant of Prayer was modified from the form I had originally submitted and tested with our set. The verse was from one of John’s writings, we had great art for it and it provided a much-needed counter to the game altering Confusion. About two months before the deadline to go to print I realized that my original submission was in the set and most likely going to be printed, but not as my winner card.

Even with the changes, it was still my preferred choice so I approached the team and asked if I could use it. There was some hesitancy. Some thought it should be ultra rare (and winner cards will most likely always be rare). Others thought it wasn’t good to have new game mechanics on the winner cards. We talked through those things and I’m not sure we ever completely agreed on all the details.

The majority of us decided that we didn’t want two “chase” cards as ultra rares in the set. We knew from the start that Three Woes was going to be ultra rare. Since Covenant of Prayer enables several themes not represented in RoJ to access the Reserve easily, we were afraid it would limit players too much to make it an ultra rare also.

While “card creation winners”, even elders, don’t get to create cards that do things not currently allowed in the game (remember my original “get any card you want” idea was shot down), if we have a new mechanic in the set in which a card is being printed, we will work with the card creator to use that mechanic on the card if it’s appropriate. For example, if Josh had submitted the version of The Watchman that the players created we would have discussed with him adding the Reserve targeting that we added to the player created card.

***Fun fact. In 2015 the original version of Coliseum submitted by Daniel thematically functioned with an animal. At the time Leviathan, The Maltese Viper and The Serpent were the only animals in the game and we didn’t have any on the set list. But the idea of an animal defense got some of the team excited and they came up with Esau, the Hunter and a few animals that ended up seeing print. Through a player created card the entire animal theme was born! Ironically the final version of Coliseum doesn’t mention animals at all.***

When it comes to the player created cards the only guidelines are that it cannot be a Dominant and that it has to go through the normal testing process. Covenant of Prayer met those two criteria so we made one last switch, from the “humble” Lost Soul to Covenant of Prayer for my winner card. Since “humble” had grown on us and provided a good counter to the existing meta we kept that on the list as well.

We’ve only been offering three category winners to create a card for two years now. Each year it presents some of the most difficult conversations we have during the course of play testing. It’s a huge challenge to allow players to create cards that are widely playable and game altering while maintaining balance and not breaking the game. And both years we’ve had two elders making cards. You might think that would make it easier.

It works out in the end because we have an amazing team of elders and play testers that together are able to accomplish great things. Any one of us, left to ourselves, would screw things up on a regular basis. God has given us unity, even when we don’t agree. I truly believe that he’s at the center of what we’re doing and the reason we have any degree of success. I learned a long time ago that this is far more than a game – it’s a ministry tool used to advance His kingdom.

7 thoughts on “Covenant of Prayer”