Hey guys, I’m back with part 2 of The Final Countdown! If you haven’t already, be sure to check out Part 1 of this article before you read this one. In today’s article, we’re going to look at some cards that underwent some changes after they had been previewed. These changes were based on community feedback from the previews, further playtester discussions and additional playtesting that occurred after the cards were initially shown to the community.

Covenant of Prayer—slight modification of adding “You may” so that this can be used in battle for numbers if that is what the situation calls for. You might also want it active but not necessarily to use that turn if you want to “turn off” the CBP Lost Soul. 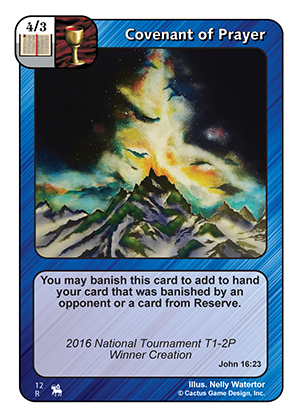 Seventh Seal –in order to allow the Seventh Seal to search for The Seven Trumpets, we added “orTrumpets” to the search ability. This also adds a couple other cards that it searches out that could make for some fun strategies. 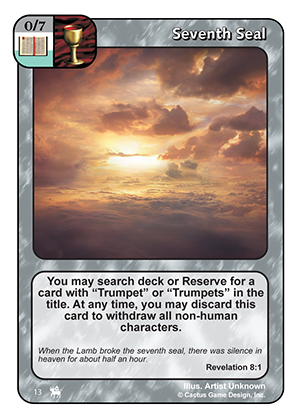 First Seal/Conquer—several people were unimpressed with First Seal, specifically becomes it seemed inherently weaker as a good Enhancement compared to Fourth Seal. To connect more closely with the idea of a “conquering” entity we changed the discard to a “take” ability, which then allows you to gain control of an opponent’s character. Testing of this change proved to be very strong and will give the player a very tough choice in deciding how to use this card. 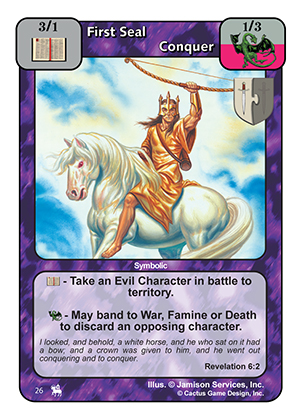 Fifth Seal/Justice Seekers—Justice Seekers will now only trigger on evil discard abilities and only be able to discard an evil card in a territory. We did not feel it would be very thematic for Justice Seekers to discard neutral cards such as the New Jerusalem Site or a Heavenly Temple Artifact. 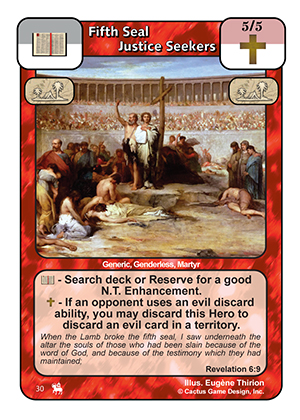 Darkness Lost Soul—we added the option of putting the Evil Character that was searched for in hand so that it would not be vulnerable in territory. This gives allows for more strategy as the player can decide to put a strong territory class character down (such as Priest of Zeus) or can keep a versatile character like The Deceiver in hand until the opponent attacks and they can grab whichever Evil Character will be most beneficial. 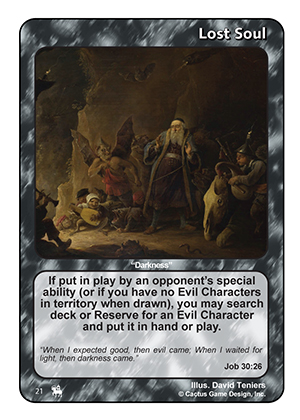 “Humble” Lost Soul—it was pointed out by a community member that the verse from the Humble LS is a quote from a verse in Proverbs so the Humble LS has become our very first dual-testament Lost Soul. Most of the cards that target a testament specific Lost Soul target N.T. Lost Souls, but that is likely to change in future sets that focus more on the Old Testament. 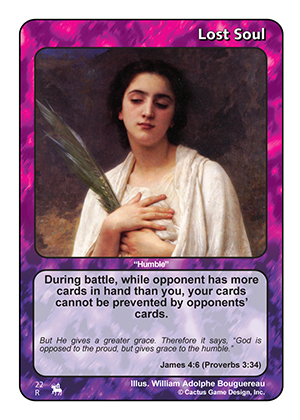 Sixth Bowl of Wrath—we changed the evil Enhancement ability to allow the player to add any evil human King, not just their own, (similar to how Faith of David works). This fits thematically with the idea that the kings were gathered from all over and also fit better on the card so it was a win-win. 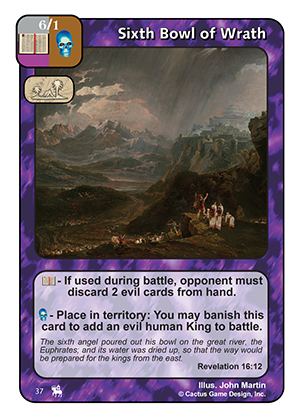 The Nobleman—we decided that only allowing The Nobleman to heal in the upkeep phase was too restrictive so we gave him a “once per round” heal ability in addition to his “each upkeep” search ability. However, because we felt he should not be as strong as Peter, you are required to reveal a good dominant to use the healing ability (similar to Jairus promo). 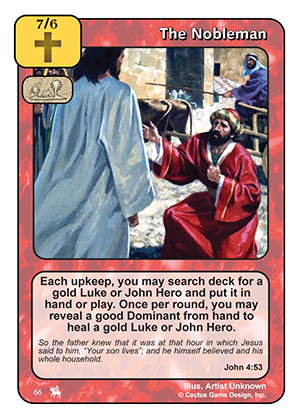 The False Prophet—perhaps the card we received the most feedback on was The False Prophet. Many people were disappointed in his ability so we decided to add a hand look as well. As mentioned previously, our goal with The False Prophet was to make a version that was good, but would not completely overshadow the UR version from The Early Church set. Personally I feel that both versions will be highly playable in different types of decks as the Early Church version now has several more useful N.T. sites it can search out. 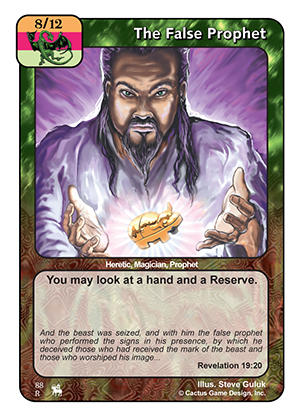 Nicolaitans’ Teaching—the targeting area was changed to “a territory” so a player could use this in battle and take the Hero of a player not in battle (instead of being limited to only taking a Hero from his opponent in that battle). 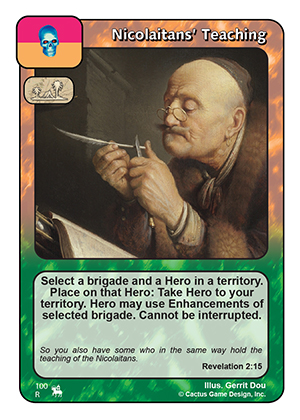 Wild Dogs—Wild Dogs originally started as a take ability, but there was some concern with putting such an ability on a generic character (particularly for T2) so we decided to do a topdeck/underdeck option with some draw potential and chump block potential. The take language had been left on there, but the ability is better categorized as a “reveal” since the player will not be taking control of the selected card. 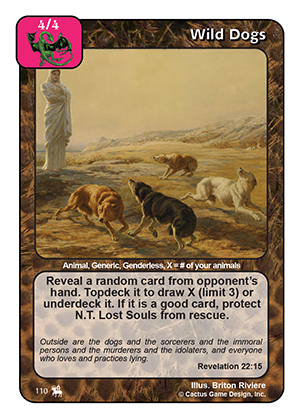 Merchants of the Earth—in order to limit potential recursion abuse, we changed “exchange a card from hand” to “exchange an evil card from hand.” In general for gameplay balance, we prefer recursion exchange abilities to be a “good for good” and “evil for evil” endeavor. 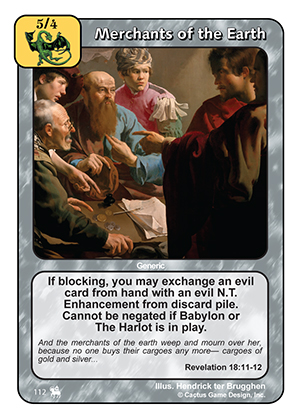 The Haunting Spirits—we decided to change the decrease from once per round to “Each upkeep” as we felt there was a bit too much potential for choose the blocker combos to abuse the ability to decrease during the battle phase. 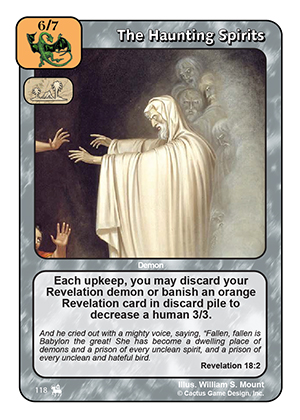 Blasphemies—in order to avoid issues of whether this could be played in special initiative as a negate (because it had the search ability first), we decided to remove the territory class and move the negate to be the first part of the ability. We also updated the condition for the “cannot be prevented” ability for simplicity. 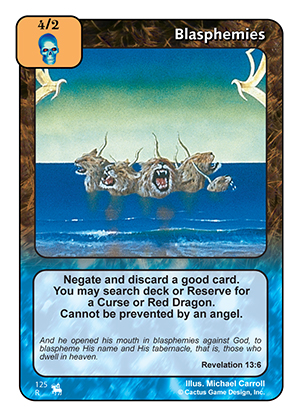 Imitating Evil—there was some confusion on some scenarios with Imitating Evil so the wording has been adjusted to hopefully make it much clearer how it works. 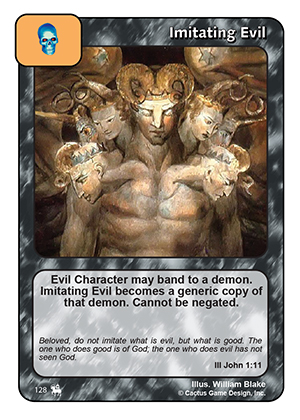 Last but not least, we made several significant changes to everyone’s favorite Frogs.

Because we already had a character in the set with a deck building exception (Locusts from the Pit), we decided that giving The Frog Demons three brigades would be a better way to represent the three frogs. In addition to orange, brown and gray were chosen as a reference to the original brigades of the characters they interact with—The False Prophet and The Beast from the Earth. Although the orange/pale green/crimson combination would have made sense thematically, that combo is getting another character in this set (The False Prophet) in addition to having a character already (The Serpent) and we wanted to add some diversity. We also modified the banding capabilities quite a bit by allowing The Frog Demons to band to any character from Revelation 12-19. He now becomes a character that ties together many of the major Revelation characters, but not all of them. Can you find all the potential targets??? 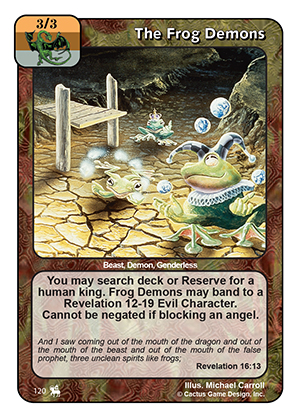 I believe that’s it for ability updates that will affect gameplay. Several other cards received minor wording tweaks that should not affect the way they are used, but were updated according to our preferred style of writing special abilities. That being said, it’s very possible I missed one or two so if you see a card that changed since it was previewed that I didn’t mention in the above list, leave a comment below and I’ll reply with the story on that one.

I mentioned at the beginning of Part 1 how thankful we are for all the feedback, suggestions and ideas that the community offered during the preview process. To show our appreciation, we kept track of everyone who made suggestions for fixing cards and we are going to draw three names to receive a pack of RoJ once it is released. Be sure to check back on Land of Redemption in the coming days to see if you are a winner! That’s all I’ve got…now excuse me while I go check the Cactus website to see if Rob has the pre-order option posted yet cuz I can’t wait!!!