Revelation of John is on its way to print, woohoo!!! First of all we want to thank everyone who helped us shape this set. The community played a significant role in making this set as good as it could possibly be, but more about that later…

I’d like to take a minute and talk about a few cards that were cut—some of which we previewed and some that never even made it to the preview stage. Creating a new expansion set is much like building a new deck in many ways. You usually start with an overall strategy (or theme). You then try to identify weaknesses or shortcomings and add a few cards to help with those. As you get to the testing stage, you might find some cards that don’t really fit and/or aren’t adding a whole lot. At that point, you may consider cutting those cards so you can try something else.

This is exactly what we did with cards like Gaius, a clay Hero who was on the initial list. He interacted well with III John cards, which there aren’t a whole lot of so we decided we would wait on doing a reprint of him. Early in the set development, we had more focus on John’s letters with a Letters to the Churches Artifact and 7 tri-color Sites for the 7 churches of Revelation, but we also wanted to develop the Heavenly Temple theme. There simply were not enough neutral slots to have so many Artifacts and so many Sites.

Even then, there were still a lot of great Artifacts (both Heavenly Temple and otherwise) on the list, but there came a point where we felt the list was just a bit too Artifact heavy and we felt we needed to cut one or two of them. We had a reprint of King’s Sword on the list, but because the old King’s Sword still has some playability (and moreso with the change we made to make immune and protect the same), we decided a reprint of that card was not as necessary right now.

Another card on the initial list was Evil Released—this card allowed you to recur a demon for one turn before then banishing it for the remainder of the game. However, some of the playtesters were not comfortable with the idea of using the “resurrect” keyword when it came to demons. We considered using a different word for the ability, but in the end decided that demons had enough ways to come back (such as Wandering Spirit or Mist) so we decided to cut Evil Released to add a different card.

A couple cards ended up getting cut after we previewed them. If you were keeping up with the spoilers and info thread on the Redemption forum, you might have noticed that Deplorable Acts and one of the Dragon’s Minions are no longer on the list. As we did the previews, we had several people comment that they were hoping to see some new weapons in the set—particularly for the orange brigade since orange did not have any to this point. Since we had two versions of Dragon’s Minion, it made sense to cut one of them in order to add an orange weapon, which became Words of the Accuser. Although it was never previewed, we also had a second version of Angelic Warrior. In order to keep the “balance” of the set we cut the second Angelic Warrior to make room for a good weapon, which ended up being a Michael’s Sword reprint. Because we do not have the rights to re-use artwork from Angel Wars, we decided to use the art from Glittering Sword. Glittering Swordd does not see much use, but it has great artwork from Doug Gray and we love to have Doug’s artwork on cards that will see more play. Lastly, we decide to cut Deplorable Acts to add a second orange weapon since we added warrior class to several of the orange demons, and it made sense for them to have a couple weapon choices—that second weapon became Sword of Death.

Thanks to some awesome graphics work by JD Cunningham (kariusvega), we now have updated images for several cards that needed a little love…whether it was blank backgrounds or muted colors, JD did an awesome job giving them an upgrade! Check out these great looking new versions! 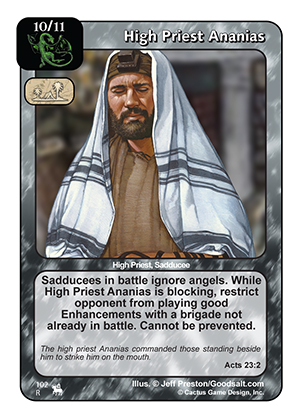 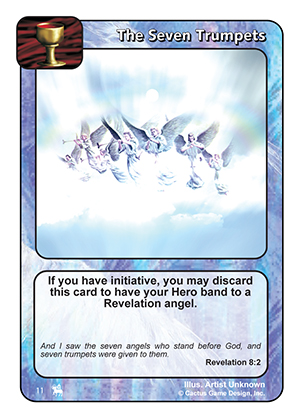 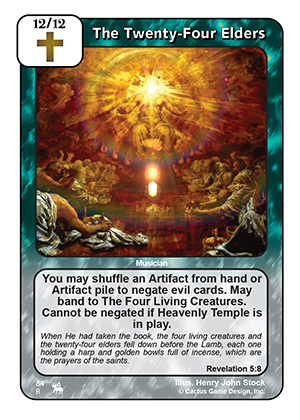 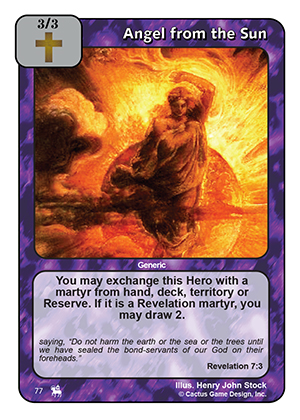 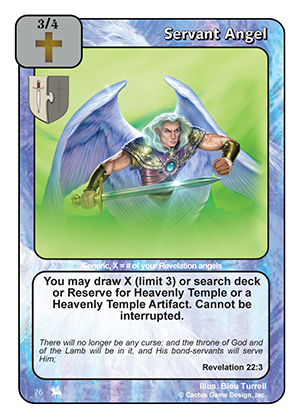 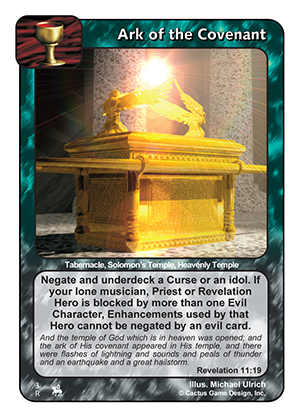 As you can see on the rare cards above, we once against used “blended” borders for all the rare cards with the exception of the player created cards that got their own unique border colors. Some blends were chosen thematically and others were chosen based on the colors used in the image. Be sure to keep an eye on Land of Redemption as the final versions of the new cards are uploaded later this week!

That’s all for Part 1! Be sure to check back in a day or two for Part 2 of “It’s the Final Countdown!” as I’ll share some updated card abilities and announce a special prize giveaway while we await the release of Revelation of John!