Here come the Demons – Part 2 of Tuesday’s Double Feature is here! We’re going to dive right in with the cards for you guys! 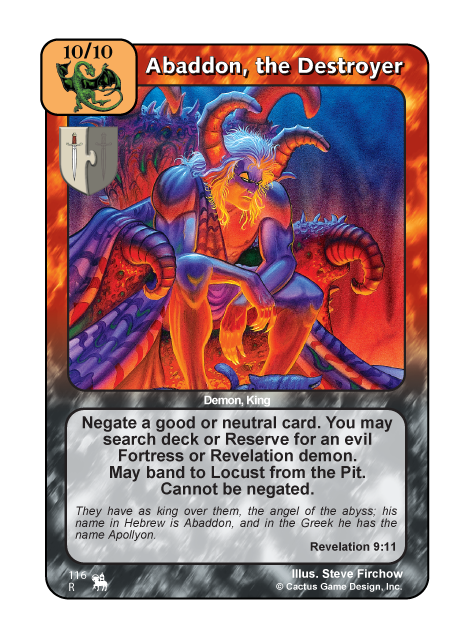 BOOM! 10/10 stats, holds up against The Strong Angel, he can go get any Revelation demon (Scroll down to see some great options) and he’s got a banding ability. Did I mention he can negate pesky things like Throne? But wait! There’s more! He does all of this CBN style. Did you notice that sweet warrior class icon? That’s a first for an orange demon! We should probably think about getting them some sweet weapons to use (Although Every Man’s Sword is pretty good already). 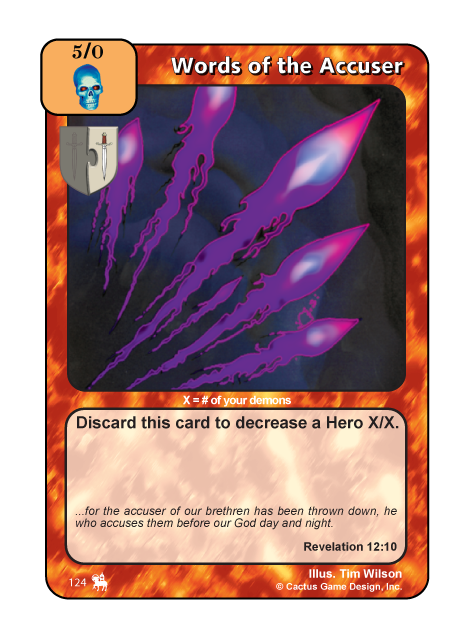 The first of two orange weapons we’re printing this year, Words of the Accuser, is more of a spiritual weapon than a physical one, which seems appropriate for the orange brigade. Words can be as sharp as Fiery Darts and just as damaging, giving this an ability similar to Lahmi’s Spear. 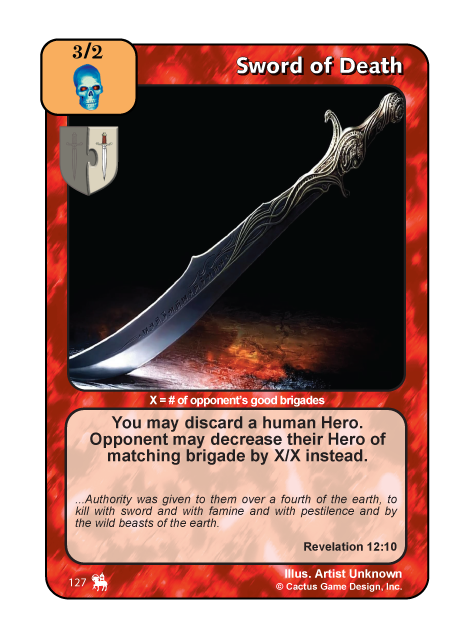 The other demonic weapon we’re printing this year is the sword held by Death. One of our goals this year is to punish multi-brigade Heroes and splashy offenses. Sword of Death will either kill the Hero outright, or the Famine and Pestilence that Death can also wield will decrease a Hero.

One warrior class demon probably isn’t enough to justify printing two weapons so in addition to adding it to the previously spoiled Dragon’s Minions and Death we added it to this guy. 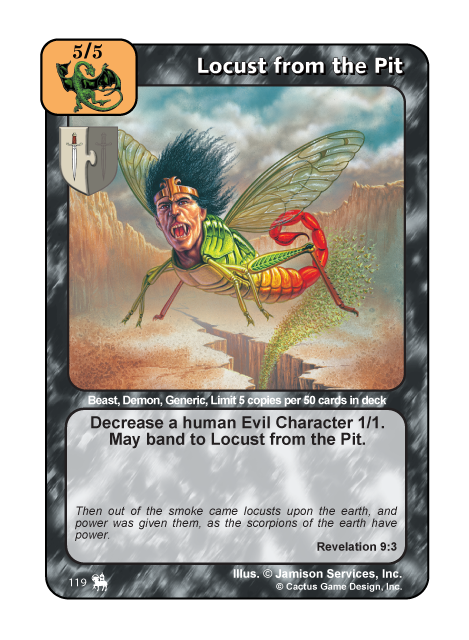 Ready community? You have two days to find better public domain art for this card! Send submissions to RedDragonThorn@gmail.com (Not saying we’ll change it as we’ve already scoured high and low, but this is one card that we struggled with immensely). Abbadon can band (and search) for this guy which makes it easy to include a few of the allowed 5 copies in your Reserve and just keep extending the band if you can block successfully. Once you get a big horde (Picture 10 or 15 of these dudes in T2!) you can really start to do some damage to human Evil Characters. 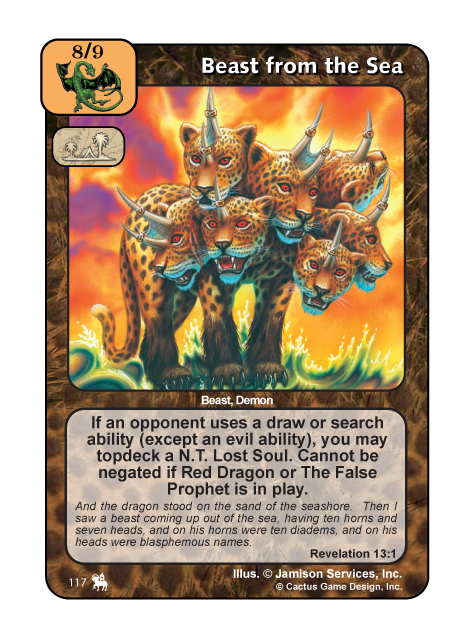 Revelation talks about 3 beasts. You’ve already seen one, Red Dragon is another and this guy is the third. Because of how intertwined the beasts are with The False Prophet we gave Beast from the Sea a bonus if he or Red Dragon are in play. In our continuing attempts to bring the game back to a state where offenses don’t just run amok we decided to punish drawing and searching by making souls harder to find if this guy is around. He also can reset when drawn abilities to get double the milage out of them. 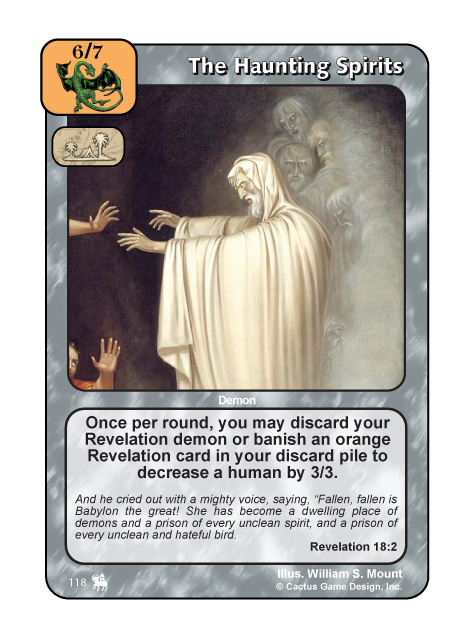 Early on in testing this guy said ‘At any time’ instead of Once per round! How amazing would that have been? Now he’s really good to set up your own initiative Hero or snipe your opponents. 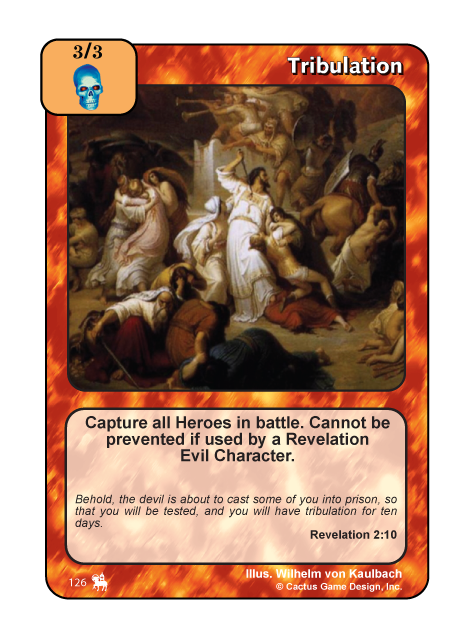 Revelation is Orange’s time to shine, so we decided it was their turn to get an anti-banding card. This can be used against a big banding chain and gains CBP if you play it in theme. 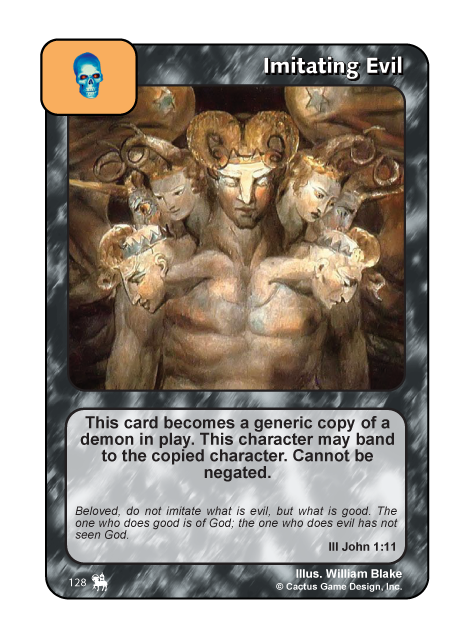 Is one King of Tyrus or Abbadon hard to defeat? What about two! When we Imitate Evil (Sin) we double the power of the devil. This card functions the same way, making it twice as hard to make the rescue. There is hope though – Evil never lasts, and because copy abilities only last until the end of battle you won’t have to go through 2x King of Tyrus more than once (In T1 at least)

Savvy observers may note that Imitating Evil is card number 128 which we had previously spoiled as Sorcerers with some changes made to the list after previews began (Primarily adding the evil weapons above) some cards got moved up or down the list a slot or two. More on this in Friday’s article.