I’m really excited to share with you some cards that I fully expect to change the way people approach the game. Not only will these cards change the game, but one of them is certain to be one of the “chase” cards in RoJ. Will it rival Shipwreck or The Second Coming? Keep reading and decide for yourself.

Flash back to summer 2016 on my drive to Minnesota States. Cloud of Witnesses has hit the Redemption scene with huge success. The content source of our next set is already decided – the five books John wrote with a primary focus on Revelation. I’m challenged with the daunting task of repeating the success of Cloud of Witnesses in a fresh new way for the following year and brainstorming ideas of how to make that happen. That’s when it hits me…

…wouldn’t it be cool to make a dual affiliation Dominant (DAD)! But what would that look like? What would it do? Should it count as two Dominants for deck building purposes? What event in scripture is worthy of a Dominant that isn’t strictly good or evil? Over the weekend I stayed with John Earley and bounced some ideas off him. After that I didn’t give it much thought for a few weeks until the contents of Revelation of John started coming together.

After Nationals it was clear that cards such as Moses, the “Dull” Lost Soul, The Throne of David, Hezekiah’s Signet Ring, You Will Remain and a few other cards were heavily prominent in the Type 1 environment. I knew that this new “DAD” should be something that offered a potential solution to any and all of those cards. But a Dominant that could simply remove any of those seems way too strong.

A huge part of what makes TSC so attractive is the versatility it offers, creating layers of strategy where previously there was very little. I wanted that same kind of versatility in this new Dominant. That’s when the solution came to me, choose an affiliation when it’s played (either good or evil), then you can negate a card of a different affiliation! A simple “negate and retreat to the discard pile” isn’t all that exciting though, so let’s place it in territory and choose a new target for the negate effect each upkeep!

I was super excited about where this was going but still needed to find scripture and a name for the card. There’s so much going on in the book of Revelation where we see God’s righteous judgments carried out on sin and rebellion through wicked people, demonic beings and calamities. That gave a lot of options for a scripture reference on a dual affiliation card. Ultimately I settled on “Three Woes” because it sounds cool and we didn’t have a card representing those events. The card art was an easy choice from a catalog of pieces I already had filed. 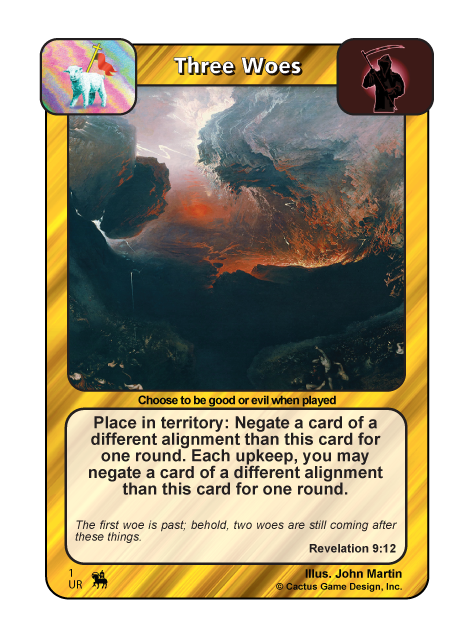 There are so many fun uses for this card. I’ve found it’s often best to play it in battle as a negate, then use it to counter a problem card on the table on subsequent turns. Since it can always hit a neutral card (being a different alignment than either good or evil) my targets have often been Artifacts and Lost Soul cards. Savvy players will find ways to shuffle this back into the deck with cards like Nathan and Shrine to Artemus to reset Three Woes and get extra mileage out it.

I like that in some decks Three Woes can be a direct replacement for cards like Destruction of Nehushtan and Shipwreck, but other times you’re better off sticking with those. For example, if I only need to stop Hezekiah’s Signet Ring for a turn so I can use TSC, Three Woes is often the better option because it can later be flexed to negate a different problem card. But if my deck relies on searching throughout the game, DoN is going to serve me better because it’s a permanent solution.

As excited as I am for Three Woes, there are two similar cards in Revelation of John that make the cut in many of my decks. They feel a lot like Three Woes younger siblings because they serve a very similar purpose of countering many of the games popular cards.

The first of those is a Heavenly Temple Artifact called Golden Censer. 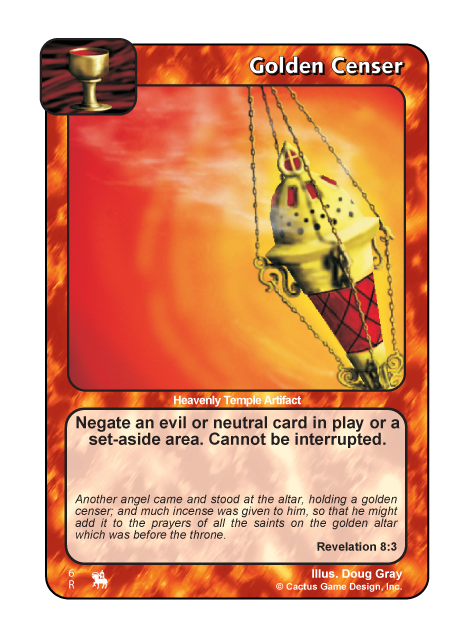 This feels a lot like playing Three Woes as a good Dominant. It gets the added benefit of being able to target cards in the set-aside area, including The Gates of Hell, which I expect to be pretty popular in the coming year. It can even hang out in your Heavenly Temple so as not to use up your Artifact pile.

The second is an evil counterpart called Image of the Beast. 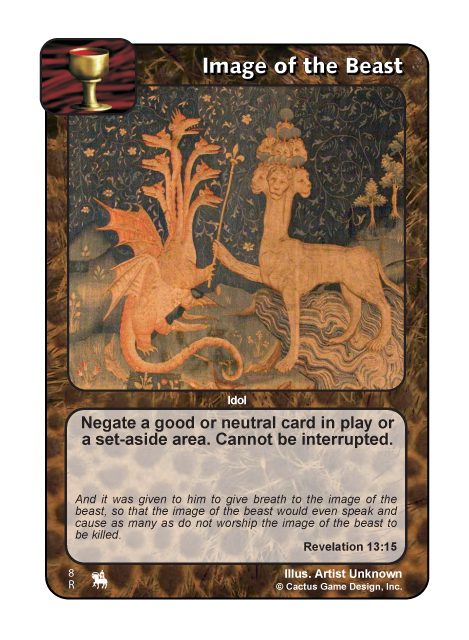 This time it feels like playing Three Woes as an evil Dominant. With cards like Areopagus where this can be activated, it too doesn’t have to take up your Artifact pile. It also has the added benefit of working with many cards that interact with an idol, including a couple new ones we’re printing this year.

I like how these two “younger siblings” are much more accessible than Three Woes to the average player. We realize that not everyone is going to rush out to purchase enough Revelation of John to ensure they get a Three Woes. Nor will everyone be able to purchase one on the secondary market right away. Since “Image” and “Censer” (as we’ve come to refer to them) are only rare cards, they should see a lot of play! Some decks will even benefit from using all three!

9 thoughts on “The Big DAD(dy) and Two Siblings”