For if He were on earth, He would not be a priest, since there are priests who offer the gifts according to the law; who serve the copy and shadow of the heavenly things, as Moses was divinely instructed when he was about to make the tabernacle. For He said, “See that you make all things according to the pattern shown you on the mountain.” – Hebrews 8:4-5

Hebrews 8:5 explains that the earthly tabernacle (of Moses and David) and temples (Solomon’s, Zerubbabel’s, and Herod’s) were representations of an ultimate place in Heaven which is called the “temple of the tabernacle of the testimony” in Revelation 15:5. This is the place of God’s throne, where the triune Lord dwells in fullness and rules all of creation. This is the place of the fullness of joy and pleasures forevermore (Psalm 16:11). Many wonderful details of this most glorious place are placed throughout the Bible, and it is an exciting and worthwhile journey to seek and find them. I recommend starting with Isaiah 6, Daniel 7, Ezekiel 1 & 10, and Revelation 4!

One really cool aspect of the Heavenly Temple is that we can learn so much about who God is from what He places around Himself. I mean, God is all-powerful and could have put anything around His throne, right? So why did He choose what is there? This is another awesome Bible study that will help us grow in knowledge of and love for God.

And behold God’s artistry in the architectural designs He gave for the earthly tabernacle and temple. As Hebrews 8:4-5 states, He directed them to be earthly copies and shadows of the Heavenly ultimate, so that even while humanity was separated from Him by our sin, we could have a glimpse and sense of Heaven…and through longing be drawn to our Savior.

In the upcoming Revelation of John set, we are super excited to introduce the Heavenly Temple, along with Heavenly Temple artifacts and various beings which God has placed near His throne! 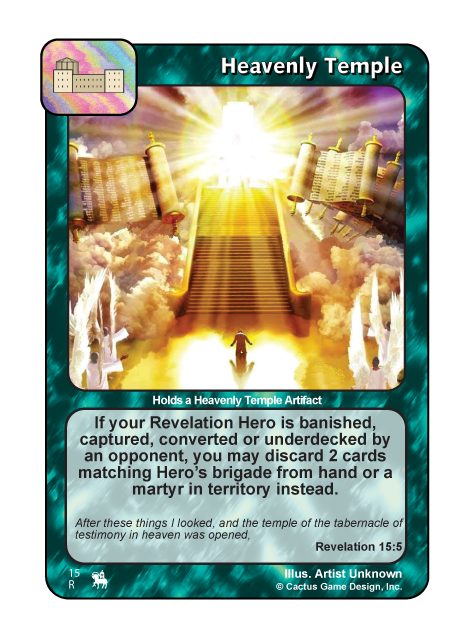 As we unveil these new cards, we will connect them to their earthly equivalents. Notice that the special abilities of many of the Heavenly Temple-related cards connect to the special abilities of their corresponding “earthly copy” Redemption card (if there is one). And one cool thing to point out: there is one overlapping card, something found present in both the earthly tabernacle/temple and the Heavenly Temple! Can you guess what it is before seeing it below?

These powerful new cards are going to be a lot of fun to play! An active Heavenly Temple will make Revelation offenses a force to be reckoned with, and the Heavenly Temple artifacts are themselves versatile enough to be splashed into many different decks to greatly bolster them. Various specific themes are boosted by the new characters, too, such as musicians by The Twenty-Four Elders and The Four Living Creatures, priests by Every Tribe and Priests of Christ, and royalty by Every Tribe.

These are not all, though – stay tuned for more awesome cards to be revealed soon! The Revelation of John set is a special one…my prayer is that it reflects what is going on in Heaven and inspires us to worship the Lord!

Jesse has been playing Redemption since 2013, and has come to love this game that is centered on Who he loves most- the triune God: God the Father, Jesus Christ, and the Holy Spirit! Being privileged to learn the game from fellow church-members, including Gabe Isbell, he still has a ways to go in learning the game but is excited to be growing! Jesse currently helps support the players of his and Gabe's church in North Liberty (IA), where he has been a youth minister since 2014. Jesse intends to enjoy, contribute to, and use the game of Redemption both for Christian fellowship and as outreach to non-believers. His prayer is that God will be greatly loved through this great game! View all posts by Jesse F here...

2 thoughts on “The “Temple of the Tabernacle of the Testimony” (or for short, The Heavenly Temple!)”