Despite being a strong Hero in his time, Job (Priests) didn’t really catch on until Dust and Ashes was released with the Disciples set. Suddenly we had a Job and angel offense where Job was the star Hero. In those days Dust and Ashes was nearly impossible to target, meaning Job was nearly impossible to stop. With some strong enhancement backup a Job offense could really do a number on the small defenses that were often used in those days.

As the game has progressed defenses have gotten larger and stronger, Dust and Ashes has become vulnerable to Shipwreck (and a number of other cards) and the Job offense has faded into the pages of history…

Don’t Call it a Comeback!

…or has it? I fully expect Job decks to be a popular thing this summer. If you’re able to travel to your closest Regional tournament you’ll be blessed to receive an upgraded version of Job!

When Job was first printed there was no such thing as territory class. When he was sitting in your territory he was relatively safe. That’s not the case anymore. While Job has some nice protection, he’s a sitting duck in territory if your Dust and Ashes isn’t around. One of the first upgrades we felt Job needed was to extend his protection to the territory.

Protection alone isn’t going to make Job a super Hero. With stats of 6/12 he’s going to need enhancement backup. But with so few Job theme enhancements to choose from they’re quickly used up. We solved that by giving Job the ability to recur enhancements that are in theme. His reach doesn’t stop there at the discard pile. Job also reaches out to the new game zone we’re calling the Reserve! (There’s that name again… check back Monday for a full explanation)

As one of the most faithful, unstoppable men described in the scriptures, Job needed those 3 magic words, the ones that no “super Hero” would be complete without… Cannot. Be. Negated. 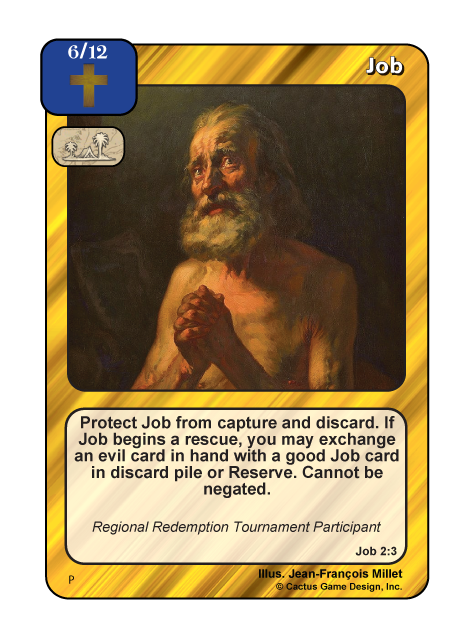 Join us tomorrow to find out the last minute change that was made to the Paul promo!