For the first time ever Redemption released a special edition set at Nationals for collectors. If you haven’t had a chance to see some of the amazing borders used to enhance the Cloud of Witness cards, I highly recommend that you check out the full set images hosted on our Imgur account!

These new borders are dripping with thematic beauty (literally for some of them)! Today I’d like to take some time to explain some of the hidden features you may not have caught at first glance.

We wanted something to unify the ultra rares, similar to what the gold borders do for a normal release. We tried a number of things but ultimately liked making them the exclusive borderless cards in the set, as seen on The Second Coming and Broken Covenant. Eternal Inheritance is a unique exception. We really liked a version we tried that put the card art depicting Jesus work on the cross in the middle of the empty tomb portrayed in the art on Eternal Covenant. We ended up giving it an “expanded border” so it still has the borderless feel while tying the cross and the resurrection together.

Letter to the Hebrews is encased in parchment paper while Pitch and Gopher Wood is surrounded by wood.

Wool Fleece uses a blend of dewy grass and a dry sheep skin.

The border on Honey from a Lion is a honeycomb.

Some cards look really good when we use an expanded version of the card art as the border. Examples of these are Coliseum, Throne of Grace, Today, Warning Against Rebellion and Deceitful Sin.

All six of the Lost Soul cards use amazing space pictures taken through NASA’s Hubble telescope for their border. 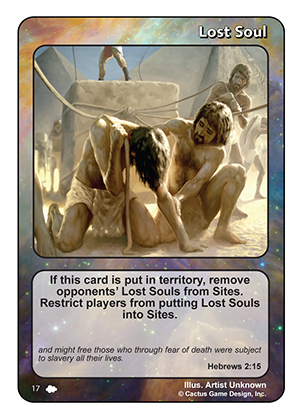 As we pointed out in our preview article, all of the animals received some pretty cool treatment with the animal face showing up in the border. You can see that on Fire Foxes, Coliseum Lion, Lions and Bear. Animals were also used to tie in Faith of Abel and Faith of Daniel.

Sometimes we used the art from one CoW card to tie it to another card in the set. King Saul’s Spear borrows the art from David, the Psalmist giving the impression that Saul is tossing his spear at a harp playing David. The art from Jacob was also used as the border for Faith of Jacob.

Kinsmen Redeemer shows a blend of wheat and Ruth gathering.

The flood survivor related cards, which include The Flood, Noah, Faith of Noah, Noah’s Wife, Shem, Ham, Japheth, The Dove Returns and Faith Among Corruption all use different color variations of rain on a window pane.

The Israelite Commander and mighty warrior Joshua has an ancient shield behind his card text and a blend of his brigade colors to fill in the rest. The same shield was also used on Faith of Joshua.

One of my favorite borders from a thematic perspective is the blend used for Moses. The top portion portrays the burning bush, while the bottom shows the 10 Commandments with a tiny version of Moses parting the Red Sea at the bottom. It captures three of Moses most well-known moments. 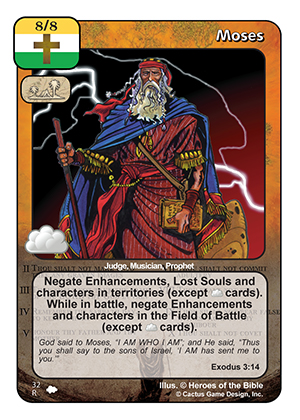 All three David cards use a flock of sheep with various colors applied. The original picture can be seen on the border of Faith of David.

Daniel is known for many things, one of which is his dedication to prayer. This led us to use the praying hands behind the text box on his card.

Several of the reprinted Heroes received new art this year. To pay homage, Jacob (Israel) used the illustration from a prior version of Jacob as his border. Similarly, we used the art from Moses (Wa) as the background for Faith of Moses.

We love tying old cards to new ones when appropriate, hopefully making the old cards more useful. We did that with Rahab and Scarlet Line this year. It seemed appropriate to use the art from Scarlet Line as the border for her card.

Each of the judge related cards used a different coloration of the scales of justice with a judge’s gavel as the background. You’ll find that on Samuel, Samson, Jephthah, Gideon and most of their faith related cards.

Another Hero who received new art this year was Joseph. But rather than use his previous art as the border we found that the art from Storehouse looked much better.

The best way to portray some things is to make them bigger. That was the case with Sword of the Spirit. We used the card art as the border but lined it up so that it looked like an expanded version of the card illustration, almost giving it a borderless feel. 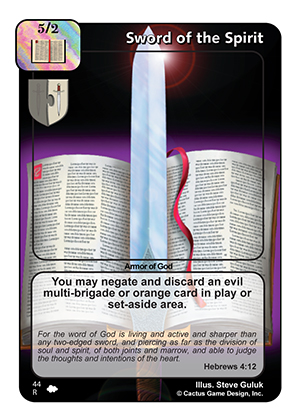 The cross, blended with written testimony was used for Justin Alstad’s player made card Word of Their Testimony.

Faith of Joseph uses the art from the Joseph themed card Goshen.

God’s promise to Abraham was that his descendants would be more numerous than the starts in the sky or the sand on the seashore. To reflect this, we blended a starry sky and a sandy beach. The stars were also used on Faith of Abraham.

Cracked dry earth represents barren Sarah and her related faith card. But it didn’t end there. God redeemed her and she gave birth to Isaac the child of promise.

Both of the church leaders (Faithful and Watchful) use a variation of a fruitful field.

We borrowed another Hubble picture of a star forming region called Sharpless 2-106, or “angel wings” for the border of Entertaining Angels.

Thanks to Christ we have the opportunity to be washed white as snow. What’s more appropriate than a snow flake background for Sins Forgotten!

Using the scripture verse as inspiration we blended both fire and clouds for the border of The Angel of the Winds.

Moses’ Parents and their related faith card, reprinted with the proper names Amram and Jochebed, both used a variant of the reeds used to hide baby Moses in a basket on the Nile.

A purple starry frame for royalty blended with a stone wall for establishing cities grace the border of Nimrod, the Mighty.

Doeg (the Slaughterer –  I wish we’d thought of that subtitle sooner) has a blood splattered teal border because of all of the priests he murdered. Similarly, you’ll see blood splatters on Thrown to the Beasts (with claw marks), Cain and Cain Murders Abel.

Coins and gold are the themes used on Love of Money, Paying Taxes and Treasures of War.

A snake skin border represents the miracles mimicked by the Egyptian magicians.

Chains of bondage were used on border for Foreign Exile.

My personal favorite border of all is the tornado used on John Earley’s card Confusion. It perfectly portrays how that card can rip apart a player’s deck, strategy and chance to win! 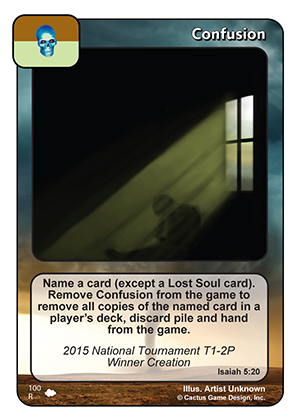 The border of Sisera’s Army portrays one version of what ancient Canaanite armor looked like.

Both Jericho and Army of Jericho use a variation of a stone wall to tie them to the “impenetrable” walls of Jericho.

The taunter and stone thrower, Shimei, uses stones as his background. We did something similar for the card Casting Stones as well.

Each of the Egyptian themed cards uses a coloration of Egyptian hieroglyphics. They can be seen on The Murdering Pharaoh, The Hard-Hearted Pharaoh, The Deceived Pharaoh, No Straw!, Evicted and Egyptian Treasures.

Did you know that the Soldiers of Zobah were the same men that used the Gold Shields which were confiscated by David? The border of the special release version should help you remember.

The border of all the evil antediluvian cards uses a variant of the card art from The Flood since all of the Violent Men, Corrupt People, Wicked People and Continuous Evil were destroyed in the flood.

Not every card had a thematic border. Some just used cool new textures and blends. Our hope is that when you see the bulk of the borders that have a thematic tie in, it will help you remember the ties that these cards have to scripture. It might even inspire you to pick up your Bible and do some reading to satisfy your curiosity!