We had a lot of fun giving cohesion to the animal theme during the development of Cloud of Witnesses. Part of what inspired the expansion of Redemption’s animals is Daniel Huisinga’s original submission of Coliseum. Although the animal related ability on Coliseum didn’t last, the animals and related cards were already integrated into the set and we became very fond of them.

Initially we added Bear and Lions, quickly followed by Coliseum Lion. It wasn’t until later in the process that we pulled an old concept from some tin ideas that never saw print and turned it into my favorite animal of all – Fire Foxes.

I’m not saying Fire Foxes is the best of the animals, although it is pretty good. What I love about Fire Foxes is it’s versatility. It can often serve as an auto-block by protecting Lost Souls. It can use a variety of evil Enhancements from two of evil’s strongest brigades. It can even help a Hero as a good Enhancement at times. I have yet to play it on Samson to remove 2 Evil Characters from the game, but hopefully I’ll get a chance some day.

With the animals being such a fun part of Cloud of Witnesses we wanted to come up with a border idea that would be equally as fun and tie them all together somehow. It was around that time that we found a really cool lion head that ended up as the border on Coliseum Lion (that was almost the card I previewed for you today). This led to using a depiction of the namesake animal’s face on the border of all the animal cards for the special Nationals release.

It’s really striking how the fox eyes on Fire Foxes peer out from behind the text. You can tell that he’s ready to strike.

We also wanted to keep the blended borders to differentiate the rare cards. What could we blend with the fox? Fire of course!

I really wish I could show you all of the animals. They look amazing! But I’m only allowed to show one so I guess you’ll have to come to Nationals to see the rest! 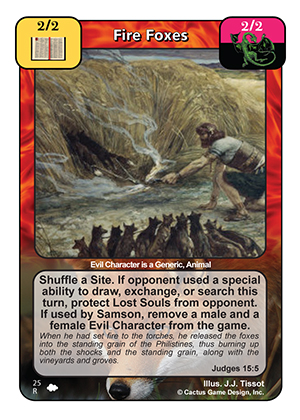