When I won Nationals in 2015 (read about it here) I got a super cool prize, the ability to create a card! Now you may be thinking “But John, aren’t you a playtester, don’t you already create cards?” Yes, and no. A lot of the set-building happens before I come in. I do contribute from time to time on the creation side, but my focus is more on ability tweaking. Also, we tend to have strong themes in our sets – The Nationals Prize was outside of these lines.

After scraping an earlier concept that wasn’t going to test well I came up with Confusion. 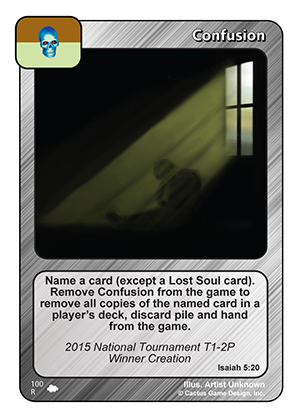 It’s a concept that we’ve tossed around the Elder team from time to time, usually a little jokingly. However, I felt that now was the perfect time to shake things up, primarily in T2, but certainly in T1 as well. The biggest thing I see with the new version is the removal as opposed to discard. Recursion has become such a major focus of the game; I really wanted a way to punish it.

Confusion can do so many different things, here’s a list of 101 (or as many as I can think up) of the best:

As you can see from a few of my fun examples up here, my card was significantly changed during the play test process. This is a good thing as it’s a very powerful card, especially in T2. It needed to be toned down in power, and that meant sacrificing aspects of the card. I liked to keep the core principle of what I wanted in play – Warping T2 into a more diverse environment. If you run 4 copies of a primary battle winner you’re liable to have difficulties. And stopping the crazy recursion potential of things like The Holy Spirit and Isaiah.

It also didn’t have the really cool naming aspect at the start, which potentially made for a really time consuming play as you decided what best to remove. It is a little ironic that I made a T2 card after winning T1, but sometimes that’s the way things shake out. I was only able to come up with 11 awesome plays. I’d love to hear about your plans to use and abuse Confusion in the comments below!