And they overcame him by the blood of the Lamb and by the word of their testimony;  they did not love their lives so much as to shrink from death. (Revelation 12:11)

From the time it was announced that the winners of T1 2P, T2 2P, and Booster Draft would be able to create their own cards as part of the new set, I knew that if I won that this would be the verse for my card. My favorite verse as a child was Philippians 4:13 (which is a verse I still love) but over the past seven or eight years this verse from Revelation has been my favorite as the idea of a testimony became an integral part of my life.

First, I want to share a few thoughts on what a testimony is. When you hear the word “testimony” you might think of a story or a retelling of events, such as when a witness testifies in court, and those are certainly good definitions. However, with this verse in particular I think the idea of a testimony goes so much deeper. John, the writer of Revelation, was recounting the war in heaven that resulted in Lucifer being cast out of heaven and hurled down to earth. Good for heaven, not so good for us here on earth, right?

But the very next verse gives us the exact formula we need to overcome our enemy. Quite simply, we need the Blood of the Lamb and the Word of our (Their) Testimony. I think it’s important to recognize that these two things come in a very specific order. Without the blood of Jesus shed at Calvary there is absolutely no hope for redemption and no possibility of a testimony in the first place. Our salvation starts with his sacrifice. Having salvation is only the beginning though; we are called to be overcomers in this world, and that’s where our testimony comes in.

Just as the verse says, our testimony begins with the sacrifice of Jesus and from there it can go any number of directions because our lives are all unique. Some people may be born into a Christian home and know Jesus their entire lives. Some may be raised a Christian, walk away, and then come back to the faith later in life. Still others might go their entire lives without knowing Jesus, but at the end of their lives they learn of the good news and accept Jesus as their savior. Paul, the author of much of the New Testament, had an incredible testimony of how he went from being a persecutor of Christians to leading the way in spreading the good news throughout the Roman Empire.

What’s important to remember, however, is that no one individual’s testimony is more or less important than anyone else’s. If you have accepted Jesus as your savior it does not matter one bit in the view of eternity whether you said that prayer as a small child or only after living a long life of rejecting God. Both cases are a testimony to the saving grace of Jesus because “All have sinned and fallen short of the glory of God” (Romans 3:23), and both of those testimonies will have the power to overcome the enemy.

I consider my personal testimony to be the whole of my life, but there are certain periods of time that I can point to where God did some truly amazing things. While I am not going to share the story in this particular article, my life involves a testimony similar to that of the prodigal son from Luke 15: I grew up in a loving Christian home, lost my way for a time and, after realizing I had no other option but to ask for help, was welcomed back with open arms by my family. That will perhaps be another article for another day but the significance of those events in my life is what first drew me to the verse in Revelation as I’ve realized just how powerful a testimony can be in our fight against the enemy. 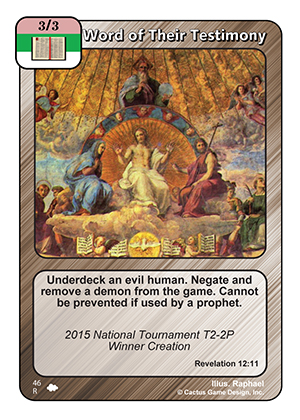 When thinking about how I wanted Word of Their Testimony to work, I first thought about trying to come up with some complicated combo with Blood of the Lamb—something along the lines of “Discard Blood of the Lamb from hand to negate and remove an Evil Character from the game.” While thematically that would probably have been perfect, I realized that in today’s meta versatility often trumps power. Relying on getting the exact two pieces of a combo at just the right time to defeat one evil character is simply not an effective strategy. In addition to that I wanted the card to be tri-color but then that would mean having to include a white enhancement (Blood of the Lamb) in any deck with Word of Their Testimony, even if it was a Clay or Green deck. In the end, I decided I wanted it to function on its own. Who knows? Perhaps a future reprint of Blood of the Lamb can incorporate Word of Their Testimony into some alternate rescue condition…hmm…

Because of the connection to Blood of the Lamb and overcoming the enemy, I knew I wanted Word of Their Testimony to hit demons. Demons have been (and still are) a force in both Type 1 and Type 2, as evidenced by decks such as Josiah’s “Spirit Thing” T1 deck and Jordan’s “When Judges Panicked” T2 deck. One of the strengths of demons is their ability to come back through Wandering Spirit and Tartaros, so to counter that I went with a remove from game ability—once you overcome that demon with Word of Their Testimony it’s never coming back!

However, as I mentioned earlier versatility is key, so I decided that if the card only targeted demons it would be unlikely to be used very much. In order to make it worthy of inclusion in today’s strongest decks I felt it also needed to hit human Evil Characters. Since there are already many options for discarding and converting humans, I decided that underdeck would be a good choice and would fit thematically because the verse is about overcoming the enemy—not other humans who would be able to be converted.

Some testimonies lead to people coming to Christ, but this testimony is about defeating the enemy (the antichrist). The Green/Clay/White combo represents the Prophets/Early Church/End Times Glory. The 3/3 stats represent not only the Trinity but also that if we are in Christ the enemy has been defeated in our past, our present, and our future. Since the card is based on the Revelation prophecies of John I also wanted to give it a bonus if played on a prophet. “Cannot be prevent if used by a Prophet” worked very well because it allows the promo Daniel (another “end times” prophet) to use Word of Their Testimony when he would otherwise negate it as a NT enhancement.

I know this one got pretty long but I appreciate you taking the time to read it! I would love to hear your feedback as well as any ideas for how to best utilize this card. I have a few ideas already (Moses was a prophet, seems like it would fit right into John’s White Cloud deck…hmm).

Lastly, I encourage you to think about your own testimony. How has God worked in your life? The power to overcome the enemy is within your story, so recognize it and use it for His glory!

4 thoughts on “Winner Card Insight – Word of Their Testimony”