Crimson has been the home to a few animals, most recently “The Serpent”. With the addition of Esau, the Hunter, it appears that animals are here to stay as a theme.

Now joining their wild counterparts are two more Evil Characters and a Curse with an ability that relies on animals being used. Let’s meet these cards and see how they will add a wrinkle to the emerging animal theme of Cloud of Witnesses.

First, let’s begin with Honey from a Lion. Right away you can tell that Esau, the Hunter will probably really like Honey from a Lion. With those two cards you may, when you are attacked, push in with Esau, discard an animal from your deck to draw 2 cards and then play an O.T. Enhancement. At that point, since you are still being attacked, you may look at the top 6 cards of your deck (since there is an animal in your discard pile now thanks to Esau), add an evil card to your hand from those 6 cards, and then underdeck the rest. That is a bunch of card movement and a three card advantage…if you’re into that sort of thing. 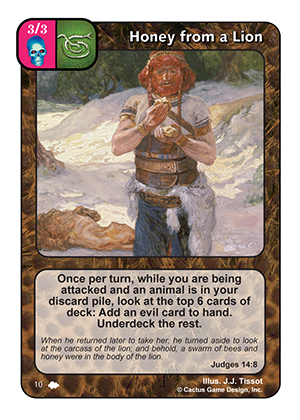 What I really love about this card though is the close proximity the ability has to the actual Biblical story. Samson was strong, not because he worked out at Planet Fitness but because of God’s blessing conferred through a vow Samson had entered into at a young age (called a Nazarite vow). As part of the vow he was to never come into contact with anything dead. So as the story goes, Samson kills the young lion and then discovers later that some bees had taken up residence inside it’s carcass. Who doesn’t like a little dead lion honey…mmmmm! And so the ability requires an animal in your discard pile and then you reach for something sweet symbolized by the revealing of the top 6 (number of imperfection) cards of your deck, breaking your vow but getting a little something to show for it (so keep one card but underdeck the rest even if they were really good and you would rather not).

Next, there are two different Evil Characters representing lions. First there is the grey and crimson “Coliseum Lion” that represents the way animals were used to persecute believers in the New Testament. This lion is very nasty and really begins to salivate when it encounters someone playing the Armor of God Enhancements or other placed Enhancements (especially of the multicolor variety). This lion can get rid of Enhancements and if it does successfully, it may also play an evil Enhancement. This is a pretty frightening prospect and may keep an AoG deck from attacking until they have appropriate armor in place. 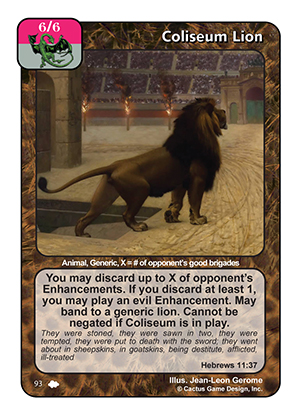 Finally, the third lion I am introducing you to today is simply called “Lions” and represents the way lions were used to persecute believers in the Old Testament; specifically, Daniel. Typically a lion does not care who it eats; whether good or evil. And so, these Lions care not either and so they pose a double threat to discard any human. If it tries to eat a Hero, as in the story of Daniel, good has an opportunity to intervene and save the Hero by way of revealing a good Dominant from hand. Again, a really awesome representation of the small part Lions played in Daniel’s story in just two sentences of an ability. 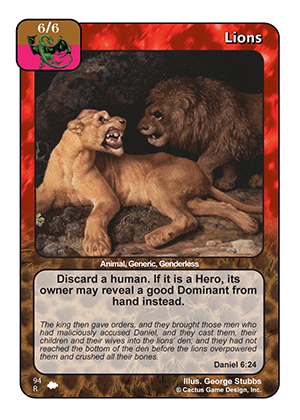 Hopefully this has given you something to chew on with the rising use of animals as a theme in Redemption. Animals are not just something for Esau to play with but are actually fairly powerful cards on their own which may cause you to second guess discarding them so easily. No matter how you choose to utilize them, they are adding another strategy that will need to be considered as you build your decks. I can also assure you that there will be more connections to this theme in later articles… or maybe I am just “Lion”.

9 thoughts on “The Three Lions of Cloud of Witnesses (**SPOILERS**)”