In the letter to the Hebrews the author looks to the O.T. stories and practices to draw parallels to the present day fulfillment of God’s promises. This gives us the perfect setting for an O.T. / N.T. hybrid set like you’ve never seen before! If you haven’t seen the announcement on the Redemption CCG Facebook page – check it out!

The centerpiece of the Cloud of Witnesses set is Hebrews chapter 11. This passage has been affectionately named the “Hall of Faith” or the “Cloud of Witnesses.” In this portion of the letter the author cites many stories of O.T. people whose faith in God produced acts of righteousness.

Each member of the “Hall of Faith” mentioned by name in Hebrews 11 (and a few who are implied by the text) is receiving a new card with the cloud icon on it. Even though many of these Heroes are reprints of previously released Heroes, the cloud icon is unique to this specific version. For example, prior versions of Joshua do not count as a cloud Hero but the new Joshua does. 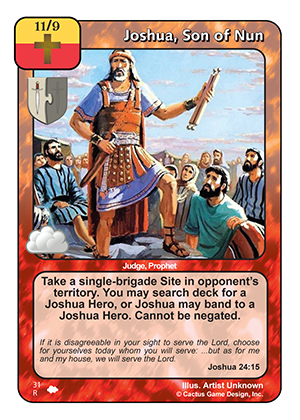 Some of the Heroes from the “Hall of Faith” already have some highly competitive cards in the game of Redemption. When printing a new version of these Heroes, we’ve made a concentrated effort to give players a card that will create an interesting deck building choice between the two available versions. Like Jacob who previously could band to Captain of the Host (and other angels) or play a Genesis Enhancement. Now players will need to choose between those great options and the cloud Jacob. 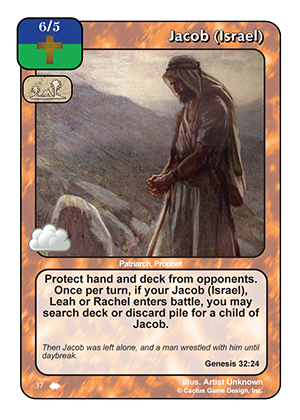 Every cloud Hero printed in the Cloud of Witnesses set is also receiving a related “Faith of (Hero’s name)” Enhancement. Each “faith” Enhancement also has the cloud icon on it. The “faith” Enhancements all have the clay brigade because their stories are told in Hebrews to encourage N.T. believers. They also have a second brigade that matches a brigade of their namesake Hero. For example, Faith of Abel has both clay and green even though Abel is blue and green. 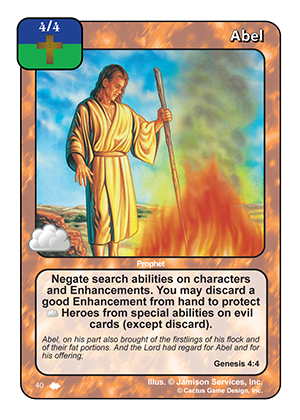 Why the Cloud Icon?

I’m glad you asked! The cloud icon allows for special interaction between certain cards mentioned in Hebrews. The set’s namesake card, Cloud of Witnesses, works with both cloud Heroes (the faithful from the past) and clay Heroes (those whose faith is being encouraged). 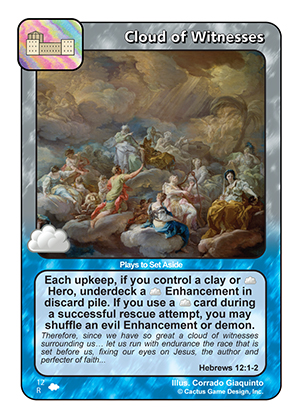 There are a number of other cards in the set that interact with cloud cards as well. The Letter to the Hebrews can search your deck for a number of really nice cards from the book of Hebrews provided you have enough faith (Enhancements) to utilize it. 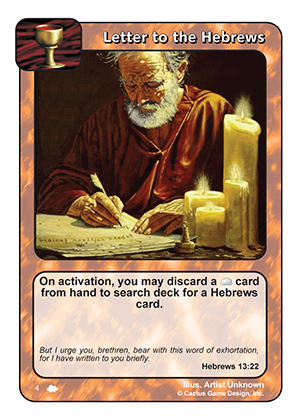 I fully expect players to enjoy searching out old favorites from the book of Hebrews, like Falling Away. But there are plenty of new cards to grab as well, like The Throne of Grace, Eternal Covenant, Salem, Reverence and Awe, Entertaining Angels, Deceitful Sin, or Egyptian Treasures. It can also search for the two new Dominants in the set!

There are several other cards in the set that interact with cloud cards, often interacting with the cloud Heroes. Cloud Heroes like Abel and Samuel have cool interaction with other cloud Heroes. Faith Enhancements like Faith of Gideon and Faith of Jacob get a bonus when played on a cloud Hero.

I Wish I Was a Cloud Hero

A couple of my favorite Heroes in the set that are NOT cloud Heroes work really well with cloud Heroes.

Melchizedek is mentioned more times in the book of Hebrews than he is in the rest of the Bible. It goes without saying that his 4th variation is included in this set. Unlike some of his predecessors, I expect this version of Melchizedek to see some serious play. 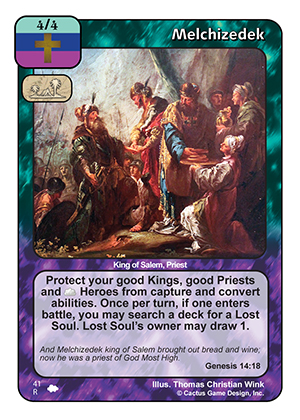 The only angel is the set works far better with humans than he does with his angelic brethren. Is your favorite theme lacking a The Angel Under the Oak type card? Is there a Hero that your deck really wants to get early in the game? Maybe this guy is a good fit for your deck. And if that Hero is a cloud Hero, all the better! 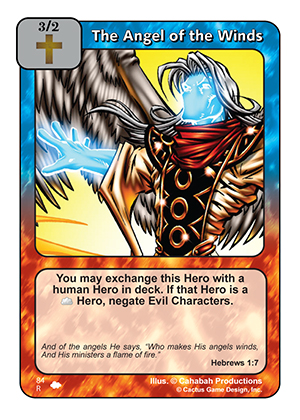 You’ve probably noticed a couple interesting things about these cards that’s different than every other Redemption card you’ve ever seen.

First, instead of spelling out “cloud” on these cards we’ve used the cloud icon in the special ability. This is something new that we’re trying out in the Cloud of Witnesses set. Depending on how it’s received it’s something that we may do more of in the future.

Some of the cards we’ve previewed today have a fancy multi-colored border. This is something special we’ve done this year for 33 out of the 36 rare cards in the Cloud of Witnesses. The remaining three rare cards are the 2015 National Winner Creation cards and also have a special border unique to those 3 cards. Our hope is that you’ll find this to be one of the best looking Redemption sets ever!

Throughout the next four weeks you can look forward to seeing previews for almost all of the 129 cards, including 3 new Ultra Rare cards, in the Cloud of Witnesses set. Stay tuned to Land of Redemption for many more previews!