I experimented with a few different deck ideas this tournament season. I began the year playing a “Water Garden” variant that played clay brigade guys (Peter and Barnabas primarily). I also messed around with a Gold/White Abomination deck, and another half dozen decks besides.

I was having a conversation with Josiah Beers via Skype one day, and came to the realization, that I was having trouble picking a deck, because in a meta-game where people are playing more balanced numbers than ever before, everything is good and can win. Which conversely means everything is bad, since you can lose to anything. In short, the game felt more draw dependent and random than ever.

Typically, when I wish to arrive at a place of consistency, I go heavy into speed. I built a deck that attempted to accomplish that, with White TGT/Ruth and Silver, for all the territory class draws you could possibly imagine. I had about a 7 card defense. It really smoked some people, and then promptly dropped 3 games in a row where I couldn’t find a block. It was at this point that I started debating playing a defensive lock deck.

After having that conversation with Josiah about consistency, I messed around with a few more decks. I decided I’d give the Super-Speed TC deck a shot. I promptly got blown out by Justin at MN State the day before T1-2P and decided to build this and give it a shot. I promptly went 3-1-1-0 (3 wins, 1 timeout win, 1 tie) and won the event. I was on to something!

I changed a few cards that weren’t effective at that tournament and handed it to Mitch to try at IA State as I judged. He didn’t fare as well with it there, but confessed to me later it’s not really his style, and thought that it was awesome.

I changed one more card and I was ready for Regionals. At NC Regionals I went 4-1 and ended in a messy 5 way tie for first. At the time, Arrest was not in the deck, so my differential stunk and I ended up in 5th.

I was still convinced that this was the correct deck to play – However, I wasn’t sure if I could mentally handle 10 rounds of it since it definitely involves some make or break decisions. Dayne Maust convinced me I had to play after I had talked myself into judging instead. I’m sure glad he did!

I gave it to Gabe Isbell for one final looking over and told him I had a list of cards that I wanted to fit in, but didn’t know where they went. We changed 4 cards from the Regionals version to Nationals, including Arrest in Gethsemane as the final card in. 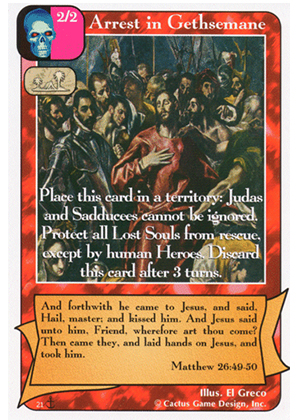 I can confidently say that without this amazing card I would not have won. It’s a great stabilizer early, buying me turns, and if I can protect it with Stoic you’re probably not getting through me 5 times. It’s also really, really good in the angel matchup. Silver Sites+Arrest can beat just about anything, regardless of what else you’re playing.

We cut 2 Evil Characters (Goliath and Prince of Persia) that were filling an anti-angel/early stabilizer type spot, and replaced them with Simon the Magician and Arrest. I anticipated seeing far more Disciple/Clay decks in the field than I did. In hindsight Sisera for CBN vs gold would have been a better choice, as we had debated both. I don’t think I ever would have needed to block with either, so it ended up being negligible. We also added in The New Covenant, as previously I was relying on being able to Angel/Abomination any character holding Charms. While I’m not sure that it was completely needed, it did let me be a little freer with the way I played, as Watchful did end up in my opponent’s Land of Bondage once.

While I’m glad that this won Nationals, I’m also happy that we already have a rule change for ignore in the works, and we’re having discussions about the way Stoic Philosophers interacts with duration Enhancements. I feel that both of these are good things. This deck is not very fun to play against, it’s not fun to sit and do nothing for most of the game, and frankly, it’s pretty boring for me too, just stressful until I establish a lock.

My first game was against Jay Chambers. He managed to push a few early tricks in, really had me on the ropes. I eventually stabilized with Arrest (this would be a common theme throughout the day). It put him on a hard tilt when he fizzled his Son of God/NJ through it.

Mitch and I played 3 games this year in tournaments. We each won a game, and we tied. Mitch is one of the players that helped me construct, tweak and play test this deck. If anybody could beat it consistently, it would be him, however, I finally had a really good draw against him (something that never happens). I think I had 5 Sites on turn 3.

Martin smoked me. I felt pretty good when I had opening hand Household Idols, since he typically plays banding decks. However, his Captured Ark allowed him to rescue with Ishmaiah+Asahel all game long. He also had Foreign Sword and Warrior’s Spear on turn 1, which made it difficult. I almost stabilized, but he had way too much, way to quick.

This round I had a suedo-mirror match. Jason had a Greek Abom defense, with a gold/green O.T. offense, including a few N.T. characters for Kindness. This game felt very slow pace-wise. Neither of us had much early, until we got to a point where we both had Abominations in each other’s territories, with both Kindnesses triggering them. He chose to take out my Sites, I chose to take out his Heroes. In the end, what he had left couldn’t quite get through my wall of characters.

Jon was running the closest thing to the original “The Deck” that I’ve seen in a while. Things like Isaiah+Call, Seraph, Jacob and Simeon for Angel Under the Oak tricks. He was able to get a couple early before I was set. I fell one away and felt that I stabilized fairly well, mainly due to Household Idols. If not for that this game could have been completely different.

Charles is a really legit player. He made top cut, and won T1-MP this year. However, this match was simply not for him. Not including Site access is usually a mistake due to popularity of the Disciples Sites and the possibility of running into a Gates of Samaria lock or a character lock like mine. Genesis decks can get away without access a little more due to the ability to play 2 “soul gen” Evil Characters. However, against a true non-attacking “turtle deck”, they’re in trouble.

In this game, my souls came out a little faster than my Sites, and he was able to rescue a couple of them. Then the Sites started hitting the table and I locked them away. It was looking for a while like he might have a shot, as his Throne Room negates ignore abilities, and I was bleeding cards to Rain Becomes Dust off my mandatory draws. I managed to draw Shipwreck and walk through.

I honestly don’t remember this game. I know that I had protected Arrest and Sites out early, and that Connor had a smaller defense, with things like Gomer+King of Tyrus, but I can’t remember his offense or anything that threw me for a loop at any point.

After going 6-1 in swiss rounds I earned a rematch with Charles. This game was eerily similar to game one, with him simply unable to get into my Sites, which came out really early this game. A late shipwreck cleared his anti-ignore mechanism.

Chris was running a sweet kings/red warrior offense, with a proto-typical pharisee defense. I don’t remember anything super memorable about this round, besides me needing to get creative to deal with his Site access wielding Cornelius. Luckily I had discarded his Peter early on; otherwise it could have gotten ugly. I believe Household Idols was the eventual answer to Cornelius, but I blocked traditionally at least once.

Arrest in Gethsemane. Need I say more? Josiah had an awesome left-field type deck. Angel offense with demon defense. Super props to this guy for an amazing concept and run. Unfortunately, the original concept behind my defense was use the Sites to beat everything that wasn’t silver, and then the characters should match up well against the angels who have access. Arrest in Gethsemane is a hard counter to a mono-angel deck, as only humans are allowed to redeem souls while it’s in play. Using Stoic Philosophers to protect it from discard meant Josiah was never ever going to rescue a soul from me.