In Redemption, there are some themes that just go together as opponents.  We see this often in starter decks, where the Judges fight Philistines and wicked Israelites, and the Disciples contend with the rulers of this world and demonic forces.

For the early church, there was no greater foe than the heretics and false teachers.  While the rulers could imprison and kill, the early Christians stood fast in their belief that “Blessed are those who have been persecuted for the sake of righteousness, for theirs is the kingdom of heaven” (Matthew 5:10).  However, those who claimed to be Christians but who would try to “delude you with persuasive argument” (Colossians 2:4) succeeded in “upset[ing] the faith of some” ( II Timothy 2:18), which lead to believers who “suffered shipwreck in regard to their faith” (I Timothy 1:19).

The early church was very fragile in many ways; reaching out to gentiles was not normal for Judaism, and those who reached sometimes found that those they touched would pervert the Word with beliefs brought from their culture or prior false religious practices.  Even those who did the teaching sometimes fell prey to the falsehoods, along with their flocks, and nothing was more dangerous than a false teacher among new believers.

In this set, we see a large printing of cards that overcome the heresy of the early church.  The Colossi and Ephesus churches have real power to overcome them, and Jude chooses to challenge their false teachings head-on.

For their obvious opponents, we also see a sizable addition being printed for the heretic theme.  To begin, we have Deluders and Defrauders, representing the type of people Paul warned the Colossae church against.  The heresies of the day, particularly for new or gentile believers, could be very persuasive and stole the faith of many away, parting them from their churches and leading them down the wrong path.

There are several heretics who are named in the New Testament.  Among these are Hermogenes and Phygellus, of whom we know little beyond the fact that they deserve a distinct mention from Paul during his woeful pronouncement that “all who are in Asia turned away from [him]” (II Timothy 1:15).  Given their special place among those who turned from the teachings of Paul on the Word, these heretics will work best when banded together.  They manipulate souls in Sites, as heretics often do in Redemption (representative of giving oneself over to the customs of a city), and protect them from rescue (representative of them ‘turning away’ from the Truth).

But the most interesting additions to the theme start with a reprint: Philetus gets a new card.  For those unaware of his history, the previous Philetus (Di) was supposed to have much smaller numbers, and a misprint led to a very interesting ability for a heretic being picked on constantly by negate-battle-winners.  The new Philetus has a tweaked ability and numbers more representative of the heretic theme:

Philetus, a Greek from Ephesus, was a Christian who professed “that the resurrection has already taken place” (II Timothy 2:18).  We will get to what this means in a moment, after we review a brand new addition to the heretic theme, Philetus’ fellow heretic Hymenaeus: 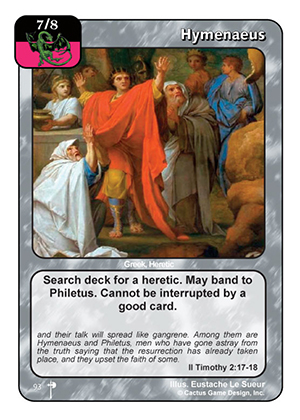 Also an Ephesian Greek Christian, Hymenaeus has a bit more said about him from Paul.  In I Timothy 1:20, he is listed separately, this time with an Alexander, and Paul says “I have handed [them] over to Satan, so that they will be taught not to blaspheme.”  These are incredibly strong words to be said about another, and feel out of character.  However, let us take a look at what this heresy was that Paul spoke of to understand the context.

In the first few centuries of the early church, there came about a heresy that would later be known as Gnosticism, which Paul seems to have recognized as a major issue on the rise.  Paul was a Pharisee by training, and therefore he was well-schooled in debate with Sadducees on the nature of resurrection and the soul generally.  Sadducees did not believe in any sort of resurrection or the immortality of the soul, whereas the Pharisees, including Paul, believed both as truth.  There was a different yet equally-important argument to be had with the Gnostics, whose beliefs ran directly counter to the teachings of the church and of Jesus.

Gnosticism likely found its roots in Greek philosophy, so it is not surprising to see many Greek or Asian heretics listed by Paul.  At its root, Gnosticism maintained that, by its nature, the physical or material is evil, and only the soul can be awakened to its higher state of purity.  At its core, the body is an evil holding place for a soul that can achieve enlightenment.  This lead to many heresies and false teachings:

These teachings clearly could lead to very disturbing conclusions.  This is the reason for Philetus’ ability, where he takes what is good and twists it into something unrecognizable, leading to believers and potential converts turning away from the Truth.  For his continued role and multiple mentions of spreading heresy, despite the strongest of rebukes, Hymenaeus searches out heretics (creating more and spreading like gangrene) and bands to one of the heretics he worked with.

Biblically, Paul fought against these false teachings constantly in his letters.  For example:

“He is the image of the invisible God, the firstborn of all creation. For by Him all things were created, both in the heavens and on earth, visible and invisible, whether thrones or dominions or rulers or authorities—all things have been created through Him and for Him. He is before all things, and in Him all things hold together.” (Colossians 1:15-17)

Clearly, Paul wants to establish that the Creator, who is perfection and one with God, created the world and all of its aspects, not something imperfect that was out of God’s hands.  He continues his fight against Gnosticism when he describes the teachings of Philetus and Hymenaeus on the resurrection as so dangerous, for their assertion of the resurrection already taking place (in their souls, without a bodily resurrection) removes the hope placed in the teachings of Christ.

Now we get back to what Paul said of these false teachers: he gave them over to Satan.  What does this mean?  While there is a great deal of discussion on this, it appears to be a cutting-off from the church entirely, as in an excommunication.  Removing the protection of the church and ensuring that the individual takes no part in it, where they could corrupt others, is intended to bring them to a state where they may realize the error of their ways and the need for God’s protection.  This is not the only time that Paul calls for a Christian to be cast out for continued immoral practices (I Corinthians 5), and the purpose is to allow a chance for the soul to be saved even if it means destruction of the physical body outside the protection of the church.

Paul and others of his time recognized the need for constant vigilance against the perversion of the Word, and there was constant battle in the persecuted church with heresies and false teachers.  In this set, that is expanded even more, but it is important to understand the reasons for the danger found in these teachings, so that we do not fall victim to them ourselves.