Jude the dude. Or is it Jude the dewd. Or maybe, Jude the dood. However you spell it, he was an important member of the early Christian Church. He was the brother of James the Just and the half-brother of Jesus. He was an authority figure in the church, enough so that he wrote an epistle with instructions for believers in his day and for centuries to come.

We were given a Jude card in the F starter deck many years ago. As an 8/8 red Hero with no special ability, he’s a great fit for a deck designed to teach the game. But for constructed play he’s not all that useful. It sounds like its time for a reprint. I give you our next mini-theme – Jude. 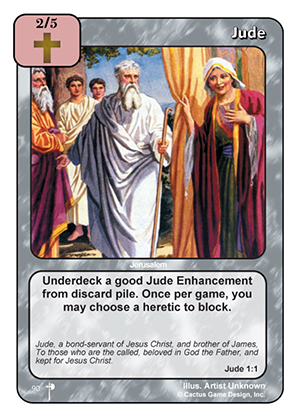 One of the primary purposes of Jude’s letter is to warn believers against the heresy that is attempting to infiltrate the church. As a leader who faced these heretics head on, we decided to allow him to choose a heretic to block him.

To make the best possible use of Jude you might want to include some heretics in your defense. That doesn’t necessarily mean you have to play a crimson heretic defense, although if you do I think you’ll find Jude might work very well in a Colossae Church offense. You could also splash a gray False Teachers and The False Prophet, pale green Hermogenes, brown Philetus or black Simon the Magician.

The book of Jude is only 1 chapter long with twenty-five verses. That influenced the change in Jude’s strength and toughness to 2/5. The lower attack also helped balance Jude’s choose the blocker ability, requiring him to need another support card to win a Lost Soul.

As we’ve seen with other authors, Jude is able to recur good Enhancements from the book he wrote. A quick search will reveal that there has only been one printed to date – Victory. It sounds like it’s time to print a good Jude Enhancement or two.

In Jude 1:9 he briefly expounds a story of the spiritual realm to make a point. The mighty archangel Michael knew the source of his power and authority. When confronting Satan face to face he declares. “The Lord rebuke you.” That sounds like a great title for a card! 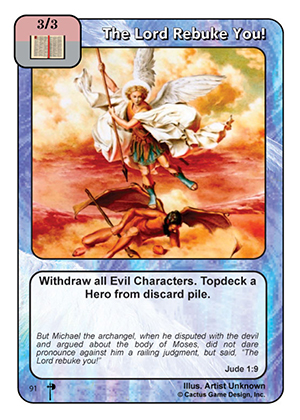 I absolutely love card titles that show off God’s character, power and authority. A couple of my other favorite card titles are The Lord Fights for You and The Battle is the Lords.

The story Jude tells is not a Biblical recount, but we do know that Satan was not allowed to claim Moses. In Luke chapter 9, Moses appears with Elijah at the Transfiguration. We’ve chosen to represent what we believe to be the outcome of this confrontation by sending away the Evil Characters in battle and returning a discarded Hero to the deck.

With two silver Jude Enhancements to recur, Jude might be a good fit for a clay/silver offense.

The last Jude card we will look at today is a dual affiliation Enhancement. It has a number of different contrasting and symmetrical elements, beginning with the title – Divide and Unify. 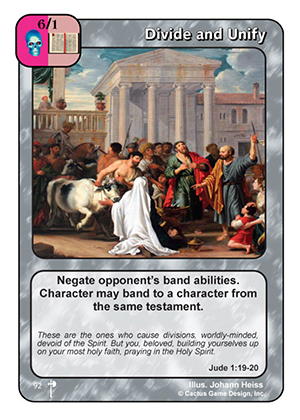 Negating band abilities represents division. We kept symmetry across the card by listing Divide first in the title, negate first in the abilities and the high attack associated with the evil Enhancement icon is flipped to the left side (it’s been on the right side of all other dual affiliation Enhancements).

Unity is shown through the toughness of 1, which is associated with the good Enhancement icon. It’s also seen in the band special ability.

With toss becoming more common, we’ve been intentional about making sure Enhancements have a decent strength. That can also be seen on Divide and Unify with the 6 strength we’ve made accessible to both offenses and defenses.

I like that Jude is a good fit in so many different offenses. He’s a Jerusalem Hero, he works well with the Colossae Church and could be a goof fit with angels. Players often surprise me by coming up with powerful card interactions that I’ve overlooked. The future looks bright for Jude!

One thought on “Jude the Dude”