“James the Just” was an important figure in the early years of the Christian Church. We first hear of him in Matthew 13:55 “Is not this the carpenter’s son? Is not his mother called Mary? And are not his brothers James and Joseph and Simon and Judas?”

We saw our first printing of James in Redemption as early as the Apostles set in the form of James (half-brother of Jesus). Due to his large numbers he’s a card I’ve used from time to time in booster draft. But beyond limited formats I’ve never seen him played.

In Acts 15 we learn that James was a leader in the Jerusalem Church. He speaks on behalf of the apostles and elders, announcing their decision about issues pertaining to Jewish laws and Gentile Christians. But we didn’t see a reprint of James in The Early Church set. Instead, we saved James to ensure we could develop a James mini-theme similar to what’s been done for other authors like Ezekiel and Luke.

We wanted James to have a strong role in a Jerusalem Church offense, by empowering and supporting other church Heroes. One way we’re empowering leaders in The Persecuted Church is to make them a territory class “general”, like the Eleazar preview you’ve seen. 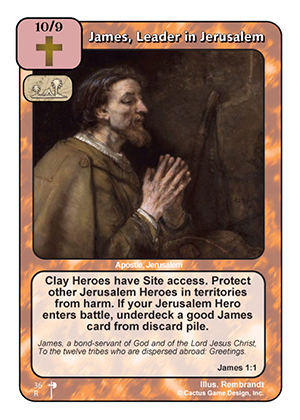 James and the elders in Jerusalem went out of their way to ensure the Gospel was accessible to both Jews and Gentiles. To represent that, and as a homage to his original card, James now grants Site access to all clay Heroes. That includes your opponent’s Heroes (if they’re clay).

James also played a large role in protecting the early church from false teaching. Originally we represented this by allowing him to protect all other clay Heroes from harm. During testing this proved too powerful. In my test decks, James was a card I wanted in every clay offense. Coupled with Peter’s healing, he was hard to remove. It also became easy to combo cards like Romans Destroy Jerusalem and Wrath of Satan for a one sided effect.

As a result, we changed James to only protect his Jerusalem Church members. Like his Site access, this includes your opponent’s Jerusalem Heroes. It still proves to be pretty strong since Jerusalem has the largest number of church Heroes in Redemption. It also encouraged a Jerusalem Church or Deacons theme instead of just a “best of clay” splash offense.

The Book of James

We like the idea of authors being able to bring back certain cards that share a verse with books of the Bible that they have written. James is no exception, so Heroes from his church entering battle will allow him to underdeck a good James card. But are there any good James cards worthwhile? Prior to The Persecuted Church the only good James cards we had were James (half-brother of Jesus) and Mercy of James.

Not to worry! We wouldn’t create a card with such a nice ability and not give players some fun cards to recycle. Let’s start with a Mercy of James reprint featuring a young Obi-Wan Kenobi look alike. 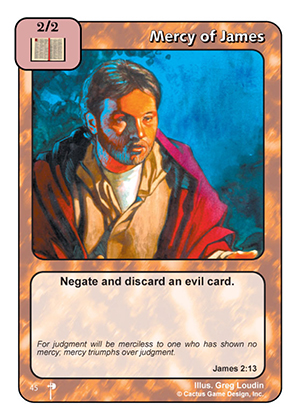 This good Enhancement features a simple, yet strong ability, similar to My Lord and My God. Use it to negate and discard a Fortress, Curse, evil Enhancement or Evil Character. It can even be a battle winner. But there are few ways to grant it “cannot be negated” but all take a combination of other cards and some work to set up.

Faith produces works is one of the main themes in the book of James. In fact, James goes on record saying, “So also faith by itself, if it does not have works, is dead” James 2:17. One of the examples he gives of faith the produces works is the endurance of Job. 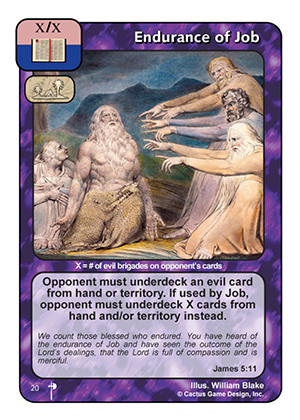 This card underwent many changes during our testing. At one point it discarded X based on the number of evil brigades in opponent’s hand. The potential to make a big hit was there but ultimately this proved to be rather weak. It often turned into a one shot I Am Holy and even missed entirely at times.

Then X queued of the number of evil brigades in territory, but only on opponent’s card to avoid combos with your own Foreign Wives and Canaan. Now at least you had control over whether or not this would make an impact.

We found that actually proved to be too strong, especially with multiple Garden Tomb Heroes able to use it as territory destruction. This is when we changed it to discard 1 evil card, unless it’s played on Job. Not only do we get a fun card for James to recur, but the Job theme gets a powerful new card, encouraging players to did that Job out of their binders again.