As Dayne mentioned in his earlier article we wanted to spread the wealth of territory class Heroes outside of the clay brigade.  Additionally, the theme of Daniel was identified to be one that could really benefit from a strong character, and thus we arrived at The Foretelling Angel.

The Foretelling Angel appears to Daniel in Daniel 10, with what is in my opinion, one of the coolest description of a person in the entire Bible, “there was a certain man dressed in linen, whose waist was girded with a belt of pure gold of Uphaz.  His body also was like beryl, his face had the appearance of lightning, his eyes were like flaming torches, his arms and feet like the gleam of polished bronze, and the sound of his words like the sound of a tumult.”  But the Foretelling Angel doesn’t just look and sound cool, he comforts Daniel and then tells Daniel some pretty interesting prophecies.

He starts by saying that three more Persian kings will arise, followed by one with greater riches than the previous three, who will turn his empire against Greece.  Fans of history can identify this Persian king as King Xerxes, who would would famously invade Greece in 480 BC.  From there speaks of a great king who will arise, whose kingdom will not go to his descendents but will instead be broken up.  This speaks of none other than Alexander the Great, whose empire would indeed break up upon his death.

After this, the angel tells Daniel of the wars that will occur between the king of the north (the Seleucids Empire in Syria) and the king of the south (the Ptolemaic Kingdom in Egypt).  The Seleucids would end up victorious and the angel further tells that the king of the north would set up the Abomination of Desolation.  Indeed, this king would be none other than Antiochus IV Epiphanes, who would set up an idol to Zeus on the altar of burnt offering.  The angel ends by telling Daniel that Michael will arise to protect his people, and that there will be a time of great distress but that his people will be delivered.  After the angel stops speaking, Daniel sees two more men in his vision who give him further prophecies.

While the biblical story of The Foretelling Angel is certainly interesting, I know you all want to see the card itself. So without further ado, here it is: 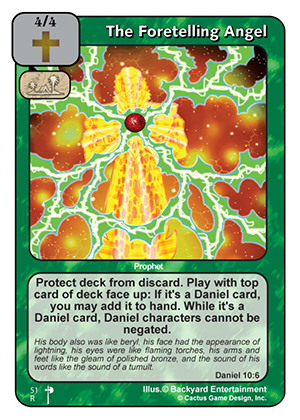 Personally, this is my favorite card in the new set, because of his unique and interesting ability.  As long as he is in play, he keeps the top card of your deck revealed to both you and your opponent, representing the glimpses into the future he gave Daniel by his prophecies.  Notice that he allows you to add the card to your hand, not only if it is a good Daniel card, but any Daniel card.  The Foretelling Angel did not just give Daniel prophecies of the good that would happen, but of the evils that would happen as well.  This creates a strong synergy between the Daniel offense, and the Babylonians that make up a Daniel defense.

You may even want to add seven copies of the Lions Den Site to your deck, as some did in our testing, to increase your chance of hitting a Daniel card, and possibly chaining draws.  However, perhaps you don’t want to draw the card, because if that top card is a Daniel card, all of your Daniel characters gain cannot be negated, making taking that draw a risk/reward scenario.

Finally, so that your opponent can’t punish you too hard for revealing that Son of God is your top card, and so that you can’t just use Jephthah to discard that top card when you see it’s a Lost Soul, the The Foretelling Angel protects your deck from discard.

As I said before, The Foretelling Angel is my favorite card in this set, and he is certainly a powerful tool for Daniel decks going forward.

Blake began collecting as a little kid back when Warriors cards were still in print. He started playing competitively in 2011, and has played with the Maryland/PA group ever since. Blake now plays primarily Teams and Type I. He also helps playtest the new sets. View all posts by Blake here...

3 thoughts on “The Foretelling Angel”