A long long time ago at a kitchen table at 11pm, I was introduced to my first combo deck. It was a brutal 7-0 shellacking during which my opponent took a 40 minute turn while I sat there helpless to do anything.

How did he do that you ask? Infinite loops of side battles. Perhaps the most famous combo deck in Redemption History is ‘The Devastator’. A deck so brutal, so efficient, so not fun to play against, that it spawned, not one, but multiple rule changes that neutered its ability to function. Keep in mind that this combo deck was played during the 2003-2004 tournament season. Kings was the newest set, and contained all of the important cards for the combo. It’s worth noting that this is a time before Darius’ Decree, before Covenant with Death, before a whole host of counters to this concept were printed.

Provisions your green Hero – on return begin a battle, forcing Red Dragon or Emperor Nero to block (depending on which brigade your opponent was playing), play any Search necessary to retrieve combo pieces – then begin a side battle with Sword of the Lord – Forcing your gold Evil Character to fight any big numbered guy on the table – Play Moral Decline – Now your character can play every brigade, which is very important. Play Momentum Change. Play False Peace – Using it to search out and play every copy of False Peace in the deck. This is called a False Peace chain, and was very common in T2 for a long time. Next Step – let your Evil Character die. Momentum Change returns all the copies of False Peace you played to your hand (Usually 8, this was before the 4 per deck rule).

Play another Sword of the Lord in the main battle. During this side battle, the real fun starts – Play Moral Decline and all 8 False Peace – Grabbing whatever combo pieces you need to replenish, and then as many copies of Confusion as you can – Play all of Confusions. Discard your opponent’s cards, starting with Dominants and Heroes. Allow the Evil Character to die again, (Combo was before hand limit, so the combo player would usually end up with 60+cards in hand before the end). Rinse and repeat, using False Peace to ensure you have another Sword of the Lord and Gold Evil Character each time. You have 8 copies of Sword of the Lord, so on round 3 you retrieve your remaining confusions, and so 3-8 you discard 8 cards from your opponent’s deck, for a minimum total of 64 cards. If that doesn’t include all of your opponents Heroes, Evil Characters, and Dominants, bravo to them.

If you didn’t quite follow all of that – It’s ok, a lot has changed since this deck was viable. It boils down to your opponent not having anything to do but drawing 3 useless cards and discarding them. You rescue 7 souls in 7 turns, and its game over.

Rules that were created/changed as a result of this combo:

Side Battle – This combo was predicated on the idea of using tons of side battles. Early versions included King Rehoboam to create Hero side battles, playing Searches and Visions of Iddo the Seer to recur them. The Elders of the time changed that rule to allow you only one single side battle per turn.

Deck Construction – The combo was so deadly because at the time T2 deckbuilding rules stated you could include 1/20 for single brigade cards. This allowed the building of a 160 card deck with 8 copies of each combo piece. I’m honestly not sure if this was a direct rule change of this particular deck, but it happened right around the same time. I’m sure this combo factored into that decision.

Its combo’s like these that the Playtest team tries really hard to avoid. Nobody enjoys sitting helpless for 40+minuntes while your opponent dictates the action. This is something that we work really hard on when we create new cards – We want people to know what their card is going to do without having to carry around a 100+page manual. It plays into one of our design philosophies. 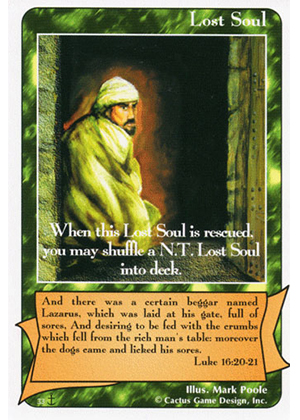 It said this for most of the playtesting process:

This card had potential to create broken combo’s – So we changed it at the last hour. We tend to err on the side of caution. This card would more than likely be ok in the current meta, but at the time we were concerned with it.

There have been many attempts to break the game over the years – But this was the first, and one of the more successful. It lead to the creation of multiple new rules as well as a plethora of counter cards being printed. It was, and always will be one of the coolest decks ever constructed. The stories here are only a small portion of the fun that I personally had with it – I hope you’re inspired to join me in the Combo Corner.

One thought on “Combo Corner – The Devastator”