I had finally done it! I won Type 2 2-player for the first time in my 12 years of playing competitively and going to ten different National tournaments. I had been playing a very fast deck all year that had an insane amount of territory control. My thought process was the meta, in Type 2, was extremely slow. Music Leader, territory class search cards, and search were running rampant in general, and the counters were hardly used all year. Factor that in with an additional season of people getting used to Three Woes and not just the N.T. lost souls, but also adapting to the new O.T. lost souls, and the newest set coming out relatively close to tournament season, and I thought people would be bound to play slower due to so many new abilities and being able to take up so much time in the upkeep phase. I thought the most important factor to my success last year was the sheer amount of time I put into the last few sets, really making sure I knew every card. I also was extremely committed last year to finally winning that elusive Type 2 crown. I was able to travel to larger tournaments that I have missed in the last few years due to my job. I realistically put in at minimum an hour a day, almost daily since the release of Fall of Man and I found the foundation of my deck before Tennessee State. By the time East Central Regionals arrived, I had fine-tuned my deck and felt confident and ready for Nationals.

I forgot the exact reason, but I know something came up with work and there was a slim chance that I would not even be able to make it to Nationals. Jay Chambers and Nikoli called me and pretty much begged and pleaded me to go, I barely put up a fight, and purchased a plane ticket last minute. I drove up to Atlanta late at night, got a few hours of sleep because I not only had to drive to the airport, but I had to get the earliest flight possible so that I would be there in time Thursday. I arrived within the hour of playing due to Chris Fachman picking me up from the airport with plenty of time to spare.

I was able to win 3 games outright, it might have been 4, and timed loss two others to very good opponents. Throughout the year I never lost a game, although I timed loss and had a timed win, but that deck never outright lost. I believe the time I put into knowing my deck, the playtesting and research into the last few sets, particularly Fall of Man, gave me a huge advantage in physical playing time of my deck. I was able to know exactly what to do, how to attack and how to defend which led me to winning my games instead of timing, like many others did that year. All of this led me to my first title which allowed me to create…Scapegoat.

This was the first year that the player created cards were due extremely early due to two phases being released. I also had my Senior Capstone Bachelor’s class as well as my ultra-intensive Airframe and Mechanic class during the same weeks! Needless to say, I was not able to research as much as I wanted but I did have a few ideas of what I would like to see. My original idea was an evil enhancement that was multicolor, or maybe tri-colored to limit its power, but the ability would be simple: Opponent may not make a rescue attempt next turn. This ultimately seemed to be too powerful while also furthering the gameplay which was already timing out too often, so that idea was scrapped. My next idea was a reprint for High Places. The idea behind this would be to offer evil sacrifices, which would have played perfectly into the new set, and the more you sacrifice, the better the reward. I wanted a token system for this and each upkeep you place a token on this fortress. Then the fortress would have three separate abilities, “sacrifice” one token to discard a hero (or something like that), “sacrifice” 3 tokens to remove any card from the game, and 6 tokens to stop opponent from rescuing next turn. The token idea was barely used yet and players needed a feel for tokens first and to be introduced properly before this card came out, so strike two for me.

My last idea was a reprint for Scapegoat because I love teal. I worked a lot with Derek Tirado who has an amazing amount of knowledge of the Bible, although I know how humble he is and will say otherwise, but I spoke with him about the possibility of making Scapegoat good and evil and if that was Biblically accurate. After some reading of the Word and listening to Derek some more, I thought Scapegoat could be justified as being both good and evil, as it just depends on what point of view you looked at it. The premise of a Scapegoat is to sacrifice something of high value or importance to cleanse oneself of sins. This was an Old Testament ritual, if that is the correct term, before Jesus Christ came, so Scapegoats were very common in this time frame. Once the Scapegoat is sacrificed, sometimes so much as let into the wild, theoretically the animal now has the sins. I wanted to encapsulate this into a card for being both good and bad, with the good portion being able to remove evil and the evil being able to stop Heroes. As previously mentioned, I love the idea of restricting the opponent from attacking so I was still able to incorporate this into the evil side. 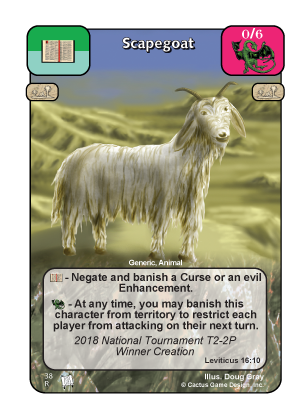 The good side of this card should be very useful in this set after seeing the new curses that have been revealed and can also be used as a negate when needed. Once used, a player can simply recur this enhancement and use the evil side of the card when they know they cannot defend, or know that the momentum is not in their favor and can potentially slow the state of the game while still being able to target their opponent in other ways, just limiting their attack. Hopefully players will find even more ways to use this card and it helps players in games, even if it’s against me! Justin Alstad was a tremendous help to me while making the card so I wanted to personally thank him and the entire playtest team for allowing me to make a card.