Did you know that only two Books in the Bible are named for females? We’ll be spending some time in Ruth next year, but this year we get to explore the Book of Esther.

You saw one character from her story in phase one, Mordecai; today we’re going to look at a couple of other central characters.

The Book of Esther tells us that there was a King, Xerxes, who ruled over many provinces. 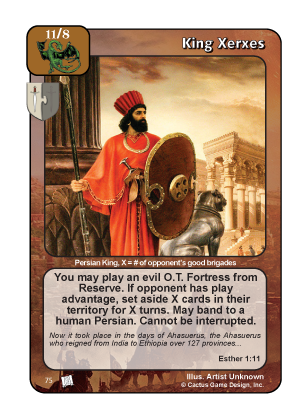 We’ve given Xerxes the ability to go get a Fortress to represent the large swath of land that he ruled over. We also gave him the ability to help even things up if your opponent gets off to a large start. Finally, like many kings, Xerxes can band to one of his subjects.

The story goes on to say that Xerxes threw a large party early in his reign – 180 days! That’s a lot of snacks! A week into the party, he asked for his wife to join him, for he wished to show her off. Vashti refused to see him, and instead threw her own party for her maids. 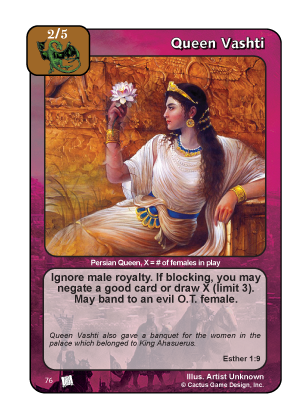 Vashti gets to ignore male royalty, which is a theme that has consistently dominated the top tables in recent years. She also gets a draw ability based on the number of females in play. Pair her with Gomer, Michal, Medium in Endor, could even toss in Athaliah for good measure! She can band to any of those, and most of them are powerful in their own right.

After Vashti’s refusal, Xerxes deposed her and looked for a new wife to be Queen. That Queen is Esther. 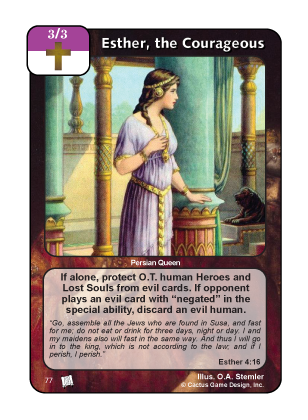 We wanted to represent Esther as she is dealing with Haman’s Plot – Courageous! She protected the Jews, so she protects Heroes and souls. She also gets to discard evil humans like Haman if they use Cannot be Negated abilities like Haman’s Plot.

The final card I get to share with you today isn’t from Esther’s story, but fits in with the other Persians we printed in phase one. 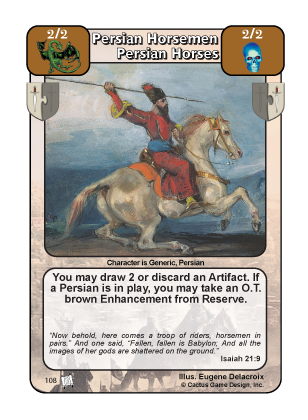 You can use Horseman to supplement a Persian defense, or use it as Horses in any brown defense for a draw, or as more artifact removal, which is more important than ever with things like Book of the Covenant running rampant. It also gets Persians some Reserve access, and is a really good initiative character.