Prophecies of Christ (phase 2) is only a few months away! It’s an honor and privilege to get to share a few cards with you today.

Many of the cards in this set were designed to show players how the entire Bible, both the Old and New Testament, points to Jesus Christ. More than being a Book about morality, more than being a way to have a better life, and more than it’s a love letter from God to His people, it’s HIS story. It’s all about HIM!

What better place to than “In the beginning…” to start our previews? The last set explored the fall of mankind into sin and rebellion. But what was God’s response to Adam and Eve’s disobedience? Did He crush and destroy them as their sin deserved? There was judgment. There were consequences (which we still bear today). But even in those early Biblical events His mercy and grace were predominant.

In the Garden of Eden, God began to reveal his long-term plan to rescue mankind. Genesis 3:15 foreshadows Christ’s victory by telling us that Eve’s Descendant will have victory over the serpent.

Moments later, in Genesis 3:21 we learn that God clothed Adam and Eve with animal skins. God made the first animal sacrifice, demonstrating what we later read in Hebrews 9:22 that a sacrifice is required for the forgiveness of sin. It’s not until hundreds of years later that we find out that God would become man and willingly sacrifice Himself as the ultimate atonement! 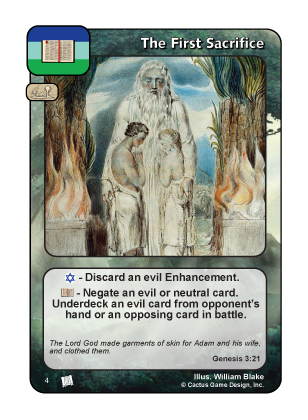 Our first preview card demonstrates the first sacrifice in multiple ways. First, the star ability can discard an evil Enhancement, which often represent sin in Redemption. That won’t help you much in your opening hand, but later in the game if you draw this during the draw phase you’ll be able to get rid of pesky cards like Gamaliel’s Speech or Nicolaitan’s Teaching!

The good Enhancement portion gives green, teal and blue a powerful new tool! As a territory class Enhancement you can negate the effect of an evil or neutral card. This will come in handy against various kinds of cards that either stop you from performing an action (through restrict and protect abilities) like Hezekiah’s Signet Ring, or they add some kind of cost when you perform an action such as Wasting Disease from phase 1. Turning those pesky abilities off for a phase can give you a chance to do things unencumbered. Then you get to remove the opponent’s best evil card from hand or you can choose to use this as a powerful battle winner!

Through His covenants with His people, God’s plan for redemption slowly unfolded. Through Noah and his family God, reestablished the earth and continues the hope that it will one day be restored. 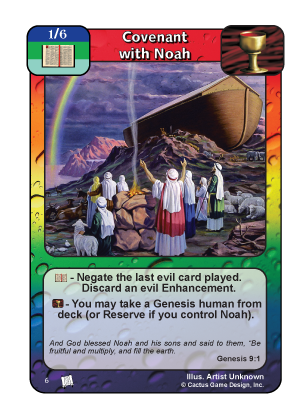 This reprint of the classic Patriarch’s Covenant continues the tradition of the original with the ability to negate an evil Enhancement with the good Enhancement side. The Artifact side presents us with a new option that harkens back to God’s command to fill the earth. I can only imagine an “I Am Creator” for Genesis that can be used every turn will make the cut in a lot of blue offenses!

Through Abraham, God sets in motion His redemption plan through what will eventually become Israel. He promises to bless Abraham, to give him land and to make him a great nation. He promises that Abraham will be a blessing to the nations, which we later see fulfilled in Christ.

God established this covenant by foreshadowing the sacrifice He would eventually make to fulfill it. Normally both parties involved in a covenant would pass through slaughtered animals – indicating that if the covenant is not kept the same will happen to them. In this instance God alone passed through while he left Abraham paralyzed and watching. (Genesis 15:17-21) 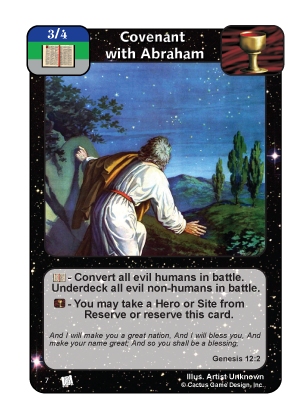 The artifact side of this Covenant reflects God’s promise to give Abraham land and to make him a great nation. When you run out of targets, you can send it to the Reserve to be retrieved and used as a good Enhancement. The good Enhancement reflects God’s promise to bless Abraham and to deal with his enemies. According to Genesis 12:3, God will curse those who curse Abraham. If you mess with Abraham, you mess with his God!

Piggybacking off of the Abrahamic covenant, the next preview is also a classic reprint. God promised to make Abraham’s descendants as numerous as the stars and as countless as the sand on the sea shore.

We previewed a version of this early on the forums before Prophecies of Christ was split into phase 1 and 2. Needless to say, it’s undergone some changes since then. 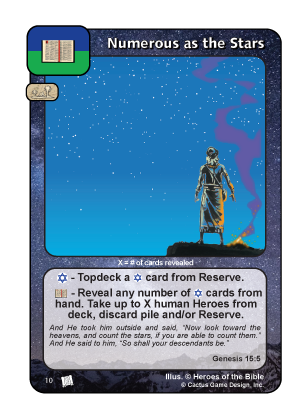 What a great card to reprint in a set that introduces star abilities! When this was first previewed, we had tried options that interacted with your star cards but found that we cannot use the star icon in the identifier line. Since then we’ve figured out a way around that barrier so we can make this count a number of star cards.

Early in the game this could get you a Hero or two. But if timed correctly it will get you several! Your star options are limited this year by the cards in Prophecies of Christ. But we plan to use the star icon over the course of the 3 set block centered around Christ, so you can bet that there will be plenty more star cards to come!

Gabe has been playing Redemption since early in 2006. While life has changed a lot since that time, his love for Redemption has not. He hosts a playgroup and assists with the design and development of upcoming set releases and even plays competitively on occasion. View all posts by Gabe here...

One thought on “In the Beginning (PoC Phase 2 Previews)”