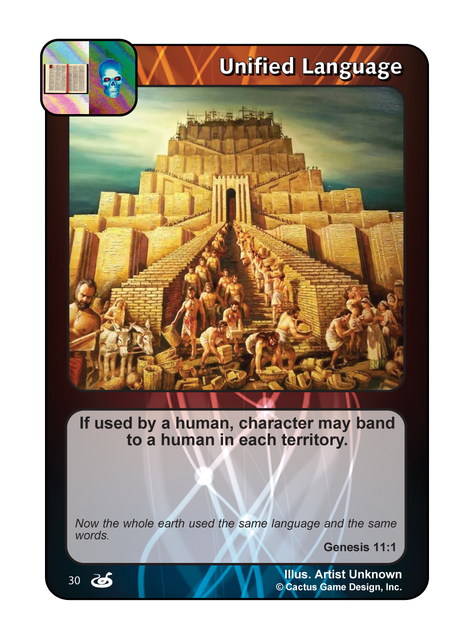 The first iteration of this card was a DAE “use any enhancement” card. However, we already had a few of those for both good and evil (the original Coat of Many Colors and Love of Money) so we decided to go a different direction that better reflected the idea of being unified. Now in the story of Babel, it talks about how the people came together with a common goal and purpose, which isn’t in itself a bad thing, but as the story goes on, we see that their hearts were proud and arrogant so their unity was being used for evil. As a result, God decided to confuse their language and that gives us the second card: Confused Languages. 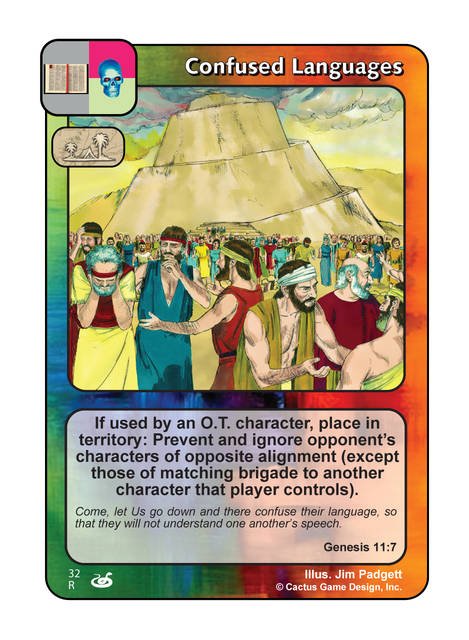 This card also started out quite different as it was originally a restrict that kept players from using their enhancements unless a character of matching brigade was in battle (thus stopping all TC enhancements from being used outside of battle). Again though, we decided to go a different direction as we want to be very careful with how many “restrict” cards we introduce to the game. As we’ve often seen, cards with broad restrict abilities usually aren’t very balanced, (yes, we’re looking at you Hezekiah’s Signet Ring). Now you might be thinking this card is like The Garden Tomb all over again, and in some ways it is. However, with the change to how ignore works, The Garden Tomb has not had the negative impact it once had on the game so we feel this card will likewise be balanced in that regard. As you’ve seen with other cards in this set, such as Babel, one of our main goals is to promote decks that aren’t just “splashing” all the most powerful cards from different brigades together. We love to see creative and different decks, but all too often those kinds of decks just get run over by decks splashing powerful cards together. Hopefully, with some of these new counters, players try some new combinations.

The next few cards are from the Evil Antediluvian theme. 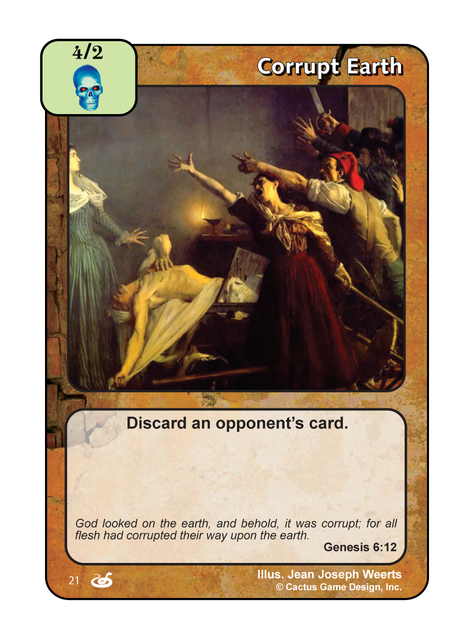 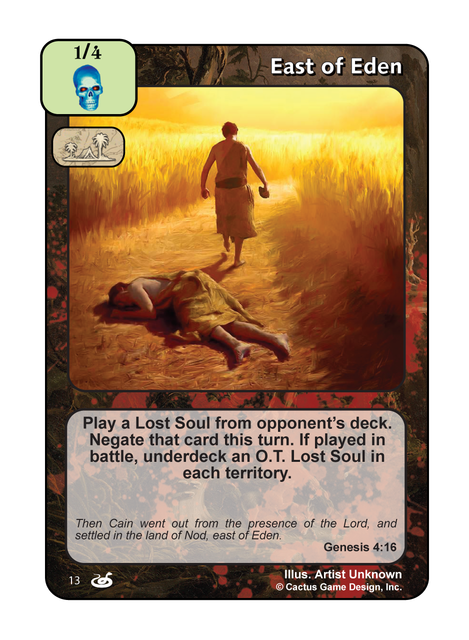 Corrupt Earth discards a card from the opponent of your choice. Remember, that opponent doesn’t always have to be an Alstad (unless you found yourself at a multi-player table with three Alstads…it does happen once in a while…)

East of Eden is an evil Lost Soul generation card, which is always great for multi-player as you can pull a Lost Soul from the deck of the player whose defense might be lacking or has a poor match-up against the offense you’re using. If you need to play it in battle, it can also be a block in T2 with the Rescuer’s Choice rule as well as getting rid of some of those pesky new O.T. Lost Souls that might be giving you trouble.

The last card is a Hero who should be fun to use in multi-player. 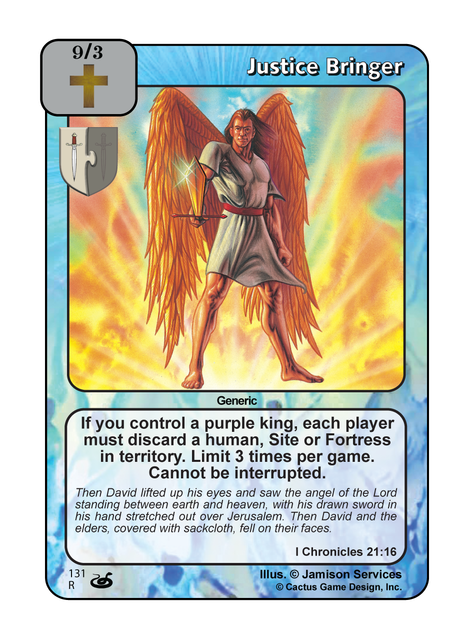 Justice Bringer is going to clean the table a few times a game. While Silver and O.T. Purple haven’t been as commonly used as Silver and N.T. Purple (Disciples), it will be interesting to see the synergy that people can find to take advantage of this powerful ability.

While all of these cards will still be useful in two-player matches, I definitely think they will really shine in multi-player—what do you think?

One thought on “First One’s Free?”