Today we are going to look at some cards that emphasize the “Fall” in “Fall of Man”. The Old Testament shows us that the Israelites were not always faithful followers of God. There were different reasons at different times for this, but one common reason was the Israelites worshipping idols instead of God. They forgot that God had selected the Israelites to be His chosen people, set apart from the nations, to know Him and worship Him and display His power and love to the world. They forgot about the many miracles God had performed over the years, such as parting the Red Sea, feeding the Israelites in a desert, and helping the Israelites win military battles they had no earthly chance of winning. And when they forgot about God, they found something else to replace Him in their hearts: Idols, created by “the work of man’s hands, wood and stone, which neither see nor hear nor eat nor smell” (Deuteronomy 4:28). I’m confident we’ll see some of these cards played in the upcoming season. 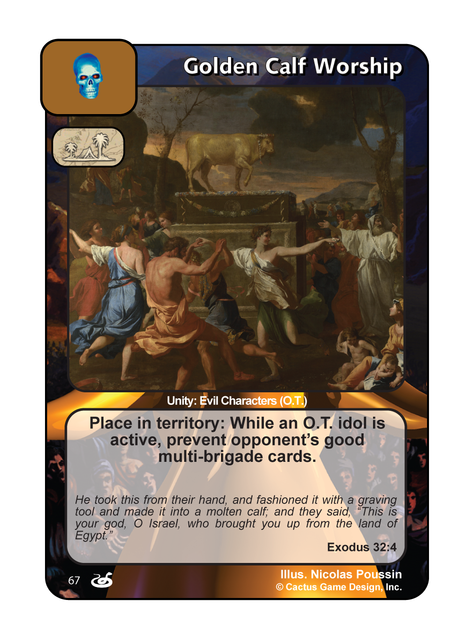 The first idol comes from one of the most notable instances of sin recorded in Scripture – Aaron’s casting of the Golden Calf and instructing the Israelites to worship it as the “god” that brought them out of Egypt. We’ve seen Golden Calf before, which prevents OT heroes. This version operates similarly to Covenant With Death. However, the Restrict ability does allow pre-block plays like Ethiopian Treasurer/Authority of Christ, and the Negate only hits characters in territory – but for both of these, only your opponent is affected! Golden Calf provides a strong counter to TC-enhancement-heavy decks – hopefully, it will make players think twice about filling their deck with TC enhancements.

Golden Calf Worship has a simple and straightforward ability. When Israel turned to idols, they no longer experienced God’s favor and blessing, especially militarily. Preventing multi-brigade good cards represents this. It does have the powerful ability to prevent cards in battle, including good enhancements. It also comes with the vulnerability of a negatable evil enhancement in a territory and a Unity identifier, although a relatively minor one – your evil characters must all be OT. 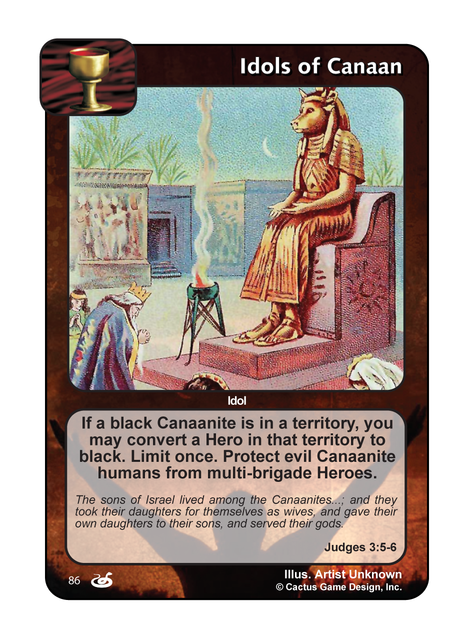 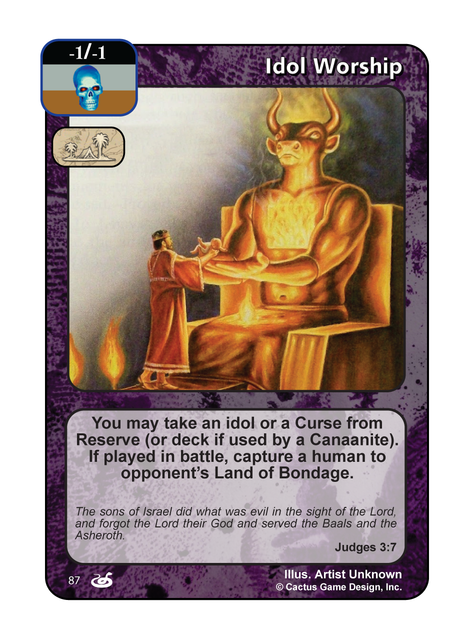 Now we move forward to Judges, shortly after Joshua’s death. This time, it is the Canaanites living among the Israelites that lead them astray instead of an Israelite leader. The Israelites intermarry with the Canaanites (even though they were warned explicitly not to do so) and adopt the Canaanite gods and idols in the process.

Idols of Canaan is earmarked for your more dedicated Canaanite defenses. It allows you to permanently convert a hero in opponent’s territory to Black – but only if that territory first has a Black Canaanite in it! Which Canaanites have a few ways to arrange… Note that this conversion has “Limit once”. If you make a conversion, you discard the artifact. This is relevant because you will no longer get the benefit of the second ability – protection for evil human Canaanites from multi-brigade heroes. Don’t forget that the protection is granted to all Canaanite humans, so you might not want to have too many multi heroes in your own offense if you plan on using Idols of Canaan’s protect ability with your Canaanite defense.

Idol Worship grants Reserve access to 3 evil brigades but provides more flexibility in a Canaanite defense. As we are trying to do with many TC enhancements, an extra benefit is available to you if you play the card in battle. The capture ability sums up well the consequences of worshipping idols instead of God: the human is captured and is in need of redemption. 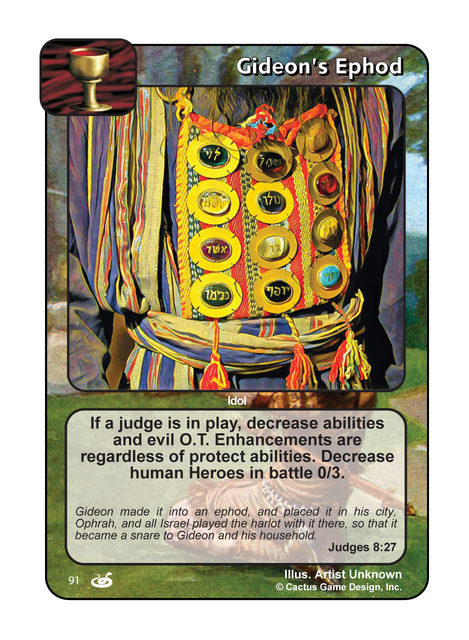 Gideon made an ephod after he had rescued the Israelites from Midianite oppression. Unfortunately, it ended up becoming a snare to him, his family, and Israel. Gideon’s Ephod grants “Regardless of Protect abilities” to decrease abilities and evil OT enhancements, but only if a judge is in play. This can be a powerful effect, but the Judge requirement is fairly restrictive. It also has a decrease ability for heroes, the same as Covenant With Adam; Gideon’s Ephod only decreases human heroes in battle, not in territory. This creates some interesting situations for a dedicated Judges deck. Some of the best Judges will die if they enter battle while Gideon’s Ephod is active, such as Othniel, Jair, and Elon (an underrated Judge, if you ask me). However, it also is stopping your opponent from attacking with their human heroes of */3 or less. Plus, you might find a 0/3 decrease helpful at times – such as granting initiative easier to Deborah and Samuel! 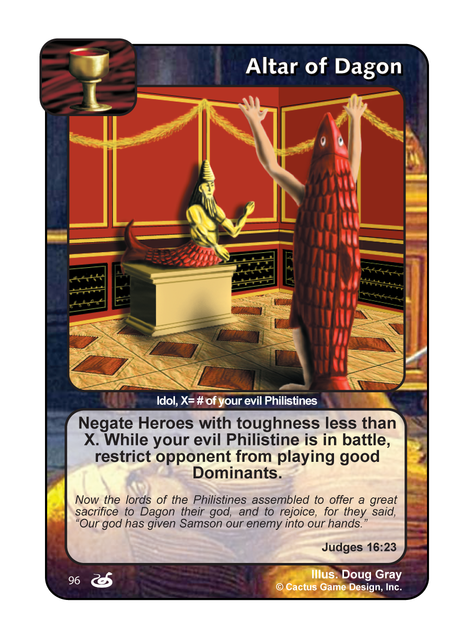 Altar of Dagon is back and is still protecting your Philistines – although in a different way. First, it can negate heroes before they wreak havoc on your Philistine defense – the more Philistines you have in play, the more heroes you can negate. (Note that it negates yours too though.) Second, it helps mitigate one of the Philistines’ biggest weaknesses – Angel of the Lord. While you have an evil Philistine in battle, your opponent can’t play good Dominants. This even works in a side battle, as long as you control an evil Philistine you own. I’m sure there’s something that can be done with that… 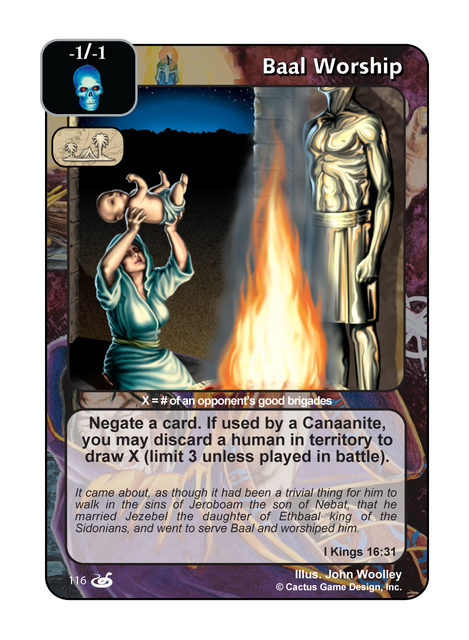 There’s no Baal idol in Fall of Man, but there is a reprint of Baal Worship from Prophets. This version is a little bit more useful! It can function as a Negate in battle and gives some speed to the slow Canaanite defense. It offers the rare potential to draw more than 3 cards if played in battle – up to 9, should your opponent have all 9 good brigades in play. 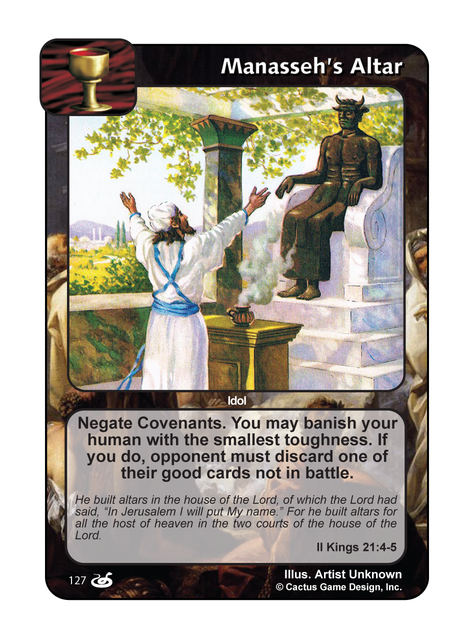 A journey through the OT to recount the Fall of Man and demonstrate our need for a Savior just wouldn’t be complete without a mention of King Manasseh. The son of King Hezekiah, Manasseh single-handedly destroyed and reversed just about every single good thing Hezekiah did for Israel. The evil done by Manasseh was so great that it sealed Judah’s fate to mimic that of the northern tribes – exile at the hands of ungodly nations the Israelites were supposed to be a witness to. Not even Manasseh’s grandson Josiah was able to turn away God’s anger at Manasseh’s misdeeds, despite the reforms Josiah made and the covenant renewal he instituted.

Manasseh’s Altar is a reprint from an old Prophets card. Manasseh did just about every possible thing to break Israel’s covenant with God, so its ability includes an ongoing negate of all Covenants. This is quite relevant in the meta right now, as a few of the most powerful Artifacts are Covenants and see a lot of play in top-tier decks – You Will Remain, Eternal Covenant, I Am Creator, I Am Holy, etc.

The second part of Manasseh’s Altar’s ability is unique. King Manasseh’s reign was specifically noted for its great shedding of innocent blood in II Kings 21:16, so it allows you to Banish your human with the lowest toughness. If you do, then your opponent must discard a good card, not in battle. Depending on the board state, you may or may not want to use this ability, as the cost is quite high. I see the best use for this card’s second ability after playing a sweeper like Great Image or Wrath of Satan, then Banishing your ECs each turn as needed to keep your opponent’s territory light on heroes, as well as early in the game when your opponent has limited choice on what to discard.

This article is long enough! So what do you think? Will some of these Idols and idol-based cards make it into top-tier decks? One thing is for sure – I can’t wait to see what the Redemption community comes up with for these!