If you’ve read my article about The Ends of the Earth here on Land o’ Redemption, you’ll recall my mentioning that Ends wasn’t my first submission for my winner card. This article will serve as an outline of the steps I took in designing the first card I submitted last year and the reasoning behind it. Without further ado, let’s jump in!

Last year at Nats, in addition to booster, I played T1-2P in what was my second tournament of the season. Needless to say, the meta I saw was decidedly offensive. Sam+Throne ran amok and Judges ruled only at the mercy of the Coliseum. Confusion and DoU were rampant. There were lots of powerful multicolored characters and Enhancements backed up by lots of speed. So, I thought, now that I had won booster and finally had my chance to make a card, what should I make?

Whatever I made, I knew I wanted it to be one-of- a-kind. Fortunately, I had an idea of how to do that right away. Something I’ve wanted to see in the game for awhile now is a good/evil Fortress, or a new card type altogether (think to all those battlefield/battlegrounds discussions on the new card idea forums). So, I decided that it would be a blended good/evil Fort.

Now that I had the groundwork, would it it be? What location has elements of good and evil to fit with Redemption? It came to me almost immediately. What battleground is more prevalent than the one we live in, the one surrounding us everyday? Thus, The World was born: 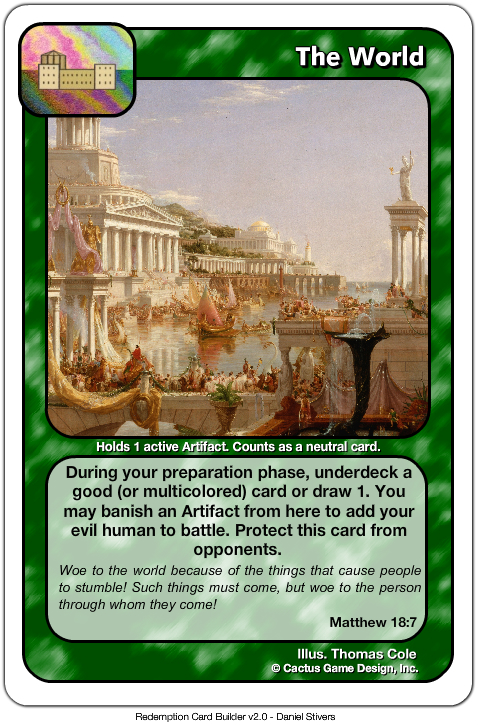 The ability was a bit trickier, and I went through several variations before coming to what you see. The above was the one I believe went through testing, so I will talk about why I chose that one.

Now that I had a name and a concept to guide me, the possibilities were wide open. So much could be done with the card, so I approached it in layers. What are worldly values? What should those of the world seek to accomplish? Acquiring wealth and power to gain an advantage over others is a big deal to the worldly, so I began with that as the foundation. Holding an Artifact is a natural way to represent the world’s inflated value of material goods, so I added that for the identifier. Throw in an optional draw ability, and I felt that the wealth aspect was down.

But what else should it do? Persecution needed to be represented in some way, I thought. Early on I had a unique convert ability tied to it that would allow its controller to convert any previously converted or multicolored character in battle. The idea was that the world would try to suppress and twist the gifts of those that stood out. This provided a counter to multicolored characters that I wanted, but it was also a very long ability and perhaps too punishing, so I decided against it. Still, I thought it had to put some hurt on all the multicolor and spread offenses I was seeing. So, underdecking a good (or multicolored) card was added along with the draw to potentially bury an AutO, Throne, or even a Foreign Wives (the World works for good as well as evil sometimes). This, I thought, would discourage splash, multi defenses which were quite popular, while at the same time giving you a way to deal with a troublesome Hero (Moses especially). Since this could now hold Hezekiah’s Signet Ring in addition to whatever Artifact you had in your pile, it was less likely that you were going to see that Hero again.

In addition to that, I had a vision of the ultimate battle-extender with the add to battle portion, representative of the hostility and open confrontation in the world around us. Sometimes it seems the world throws everything and everyone in your way to slow you down and discourage you. Gameplay-wise, this seemed like a great way to beat an AotL or some other CBN battlewinner; a Gates of Hell for humans that required an artifact to be sacked to add an evil human to battle. Defenses would have some epic battles once again!

The protect was here and there between protecting itself or protecting your Sites (Joshua chiefly), but I for sure didn’t want The World to just get shuffled by Faith of Abel (as a neutral card), so it began as protecting itself. The bonus protection from ANB would’ve been helpful too.

By this point, I had a card that I felt was very solid and gave a lot of defenses teeth against all the powerful offenses of CoW, in addition to being quite thematic. But it didn’t stop there.

Besides all that, what I really tried to push for was a new layout for the card. It wouldn’t have been how you see it now, but instead sideways-aligned! Imagine another card in the style of Banks of the Nile/Pharaoh’s Court (only better-looking with the text off the picture). This would add another level of meaning to the card that the good/evil icon symbolizes (the world is God’s creation, but has been corrupted by sin), as well as give it a cool aesthetic appearance to really stand out.

But wait, there’s more! Yes, if all that wasn’t enough, when I began searching for artwork, I came across Thomas Cole’s five piece collection, The Course of Empire. Though I felt the middle piece was perfect for the card, I also thought it would be interesting to incorporate all of them in the card somehow. So, the idea of having five versions of the card with a different piece of art on each came to me. This, of course, I thought highly unlikely, and yeah, it couldn’t happen. But an Alternate Border of the card could possibly bring all the pieces together, so I still hoped there.

Finally, with all that out of the way, the card was submitted and I went on my merry way. It wasn’t until a few months later that I heard back from the playtesters. Some things needed to change. More specifically, pretty much everything.

For starters, holding any Artifact was a scary thought that could lead to some potentially busted combos. So, how about if it held just an Idol or Curse? Change #1. Next, the territory destruction aspect was too strong, especially getting rid of Evil Characters. What if it had a cost to it for balancing? Change #2. Still, above all that, the add to battle was proving ridiculous.

See, what I’d failed to take into account when I designed this card is that, outside of it being very desirable for balanced and offensive decks, defense-heavy decks would absolutely kill to have something like this. Mr. E put it to me this way: Imagine HHI, Darius’ Decree, and any other Artifact all active at once, all game in his 2015 Abom deck. That, coupled with the fact that Gates exists and could potentially be out at the same time as this means that you may have to block the opponent just twice to lock them out, and still have Arts to sacrifice to The World to further extend battles. Just have Lampstand to protect from Shipwreck and you’re golden.

I’ll admit, that was enough right there to convince me that there had to be some limiting or some drastic change. No one enjoys getting locked out by defensive decks, and the viability of Abom decks in 2015 was a large reason that I didn’t play in that year’s Nats. It was suggested that the add to battle be changed to a band. Change #3.

I was wary of how these changes were starting to look as a whole, but ultimately they were not why I didn’t go with this card, not really. When it was determined that it wasn’t going to be a sideways card, and it couldn’t be good/evil, then it lost its luster for me. The unique typing and presentation were the main things I really wanted for it, but it just wasn’t time for something like that. For fun, here’s a mock-up I made of the new version of The World afterward to reflect these changes, aptly-named, The Fallen World: 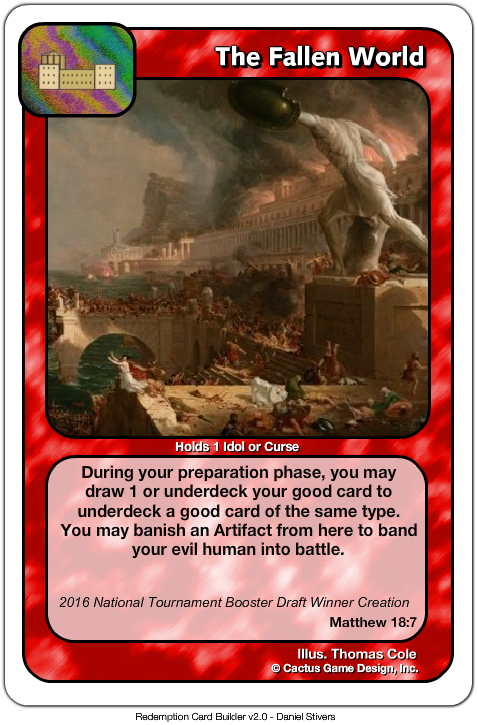 I’m very glad I didn’t go with The World as my card, for how well The Ends of the Earth turned out, but maybe someday something like this boss Fortress will see the light of day. Hopefully we’ll have more cool stories like this from other card winners come next year!

Josh began his Redemption journey around early 2006 after his brother received G & H decks and some loose packs as a Christmas gift. While he used to be quite an active player, nowadays there isn’t as much time for Redemption, as that gig has all but disappeared from WI. Still, he finds time to attend larger out-of-state tourneys for the great people who are more than half of the reason Redemption has lasted this long. He has a penchant for building T1 decks and thinking of new cards. Booster is his favorite category (and it should be yours, too!). "Played red before 2011" - Josh Knitt (Kuh-nitt) View all posts by JoshK here...

One thought on “Creating a Card: The World I Know”