I’m excited to reveal the new National promo for 2017 today! For many of you this is the first time you’re hearing that The Tabernacle is getting a sweet new reprint. But a few savvy readers found an easter egg we hid here on Land of Redemption a little while back revealing the card title.

Sometimes there’s a game within the game! When we rolled out the updated set lists, hidden in the promo list was the title for the 2017 National promo. Sneaky, sneaky. But up to this point only those that play test have gotten to see the special ability and even fewer still have seen the finished card. So what are we waiting for?! 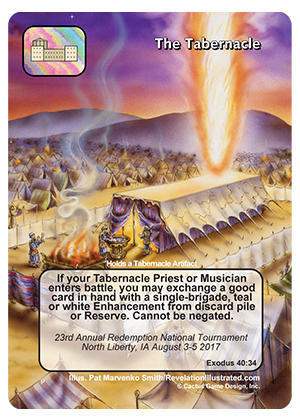 Unlike past promos that used the gold border, or even recent National promos the used the Redemption sword, this year we’ve gone completely borderless so that the cool art takes up the entire card face! Wow, that looks amazing!!!

Many of the Tabernacle Priests themselves aren’t super powerful Heroes, but with all the support they’ve gotten in the past few years I have a feeling that they might be a force to be reckoned with. Dutiful Priest recurring Gifts and Offerings seems pretty good to me!

I’m sure that a lot of you are even more excited about the additional support for musicians. Imagine Aaron banding to Moses while you pull back your two best single brigade Enhancements! The possibilities get out of hand rather quickly if you consider a 4 character musician band starting with Chenaniah and ending with the 3 musicians from Priests!

Rob has generously agreed to give participants a copy of The Tabernacle each time they complete an official event at Nationals 2017! That means if you participate all three days you could end up with 3 copies of The Tabernacle. That’s great news for T2 players and for people with friends who can’t make it. If you’re one of the people who can’t attend Nationals 2017 you might want to make a deal with a friend who’s coming for one of their extra copies!

Stop by our updated Nationals 2017 page to check out the order of events and get pre-registered if you haven’t already.

Similar to last week we’re going to share a card that uses a new twist on one of our favorite borders from last year, followed by something really cool and thematic that we like and finally something that just blows our socks off!

This first preview uses a praying hands border that some of you might recognize from the special edition version of Daniel. We felt that the praying hards were a perfect fit for our some of our martyr friends on RoJ. 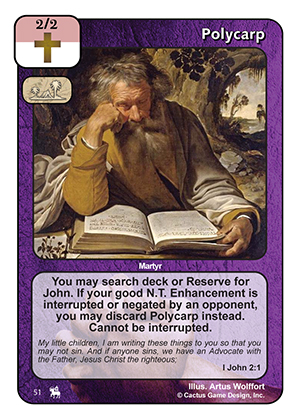 With so much orange in RoJ we found a lot of cool borders that we felt represent the fires of hell in various forms. Here’s an example of that on a card that I know has many players excited!

I’m really excited to share this last one with you because it came as a special request on the message boards. The Schaefer wanted to see more of that awesome art on the special release version and he got his wish! 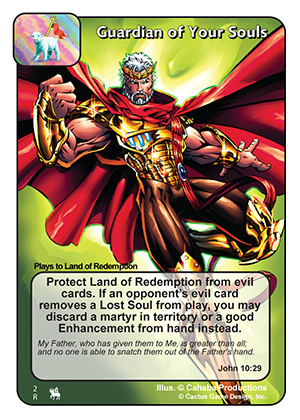 Please join us next Friday for more National Release Revelation of John previews and news about special winner promos!