There’s a saying in Redemption that Type 2 is not for the faint of heart (particularly Type 2 multi). While playing a game of Type 2 can prove to be daunting for some, Type 2 offers players a chance to be creative with ideas and playstyles beyond that of Type 1. I believe that opportunity is the biggest plus of playing Type 2 and it will be the focus of this series—the diversity of Type 2.

Just about any idea, theme, or playstyle can be incorporated into an effective Type 2 deck (with perhaps a few exceptions such as Heroless or Herolite, but I could be wrong). In this series Justin and I will try to introduce some various deck strategies within Type 2 and some ideas to consider using within those strategies. Playstyles differ for everyone so any ideas we might give should not be considered mandatory or auto-includes for a deck, but rather should be viewed as ideas to explore for yourself. To start things off I figured we would start at the beginning, the very beginning in fact, as the focus of this article is the Creation of the World Genesis deck. 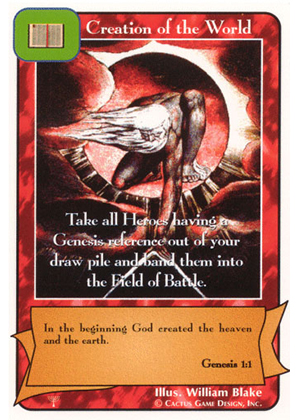 Creation of the World is a card from Patriarchs that does not see much play in Type 1 categories, but when built into a T2 deck can have a very powerful effect. The ability to search out every Genesis Hero from your deck and band it directly into battle is certainly strong when you consider just how many useful Genesis Heroes there are. In certain situations, it also can be a battle winner when you have Angel at Shur and Isaac in your deck.

The biggest considerations for the Creation of the World strategy is which Heroes to use and in what amount. While this can differ from player to player, I believe the main thing to consider is which versions of Joseph and Jacob to use. 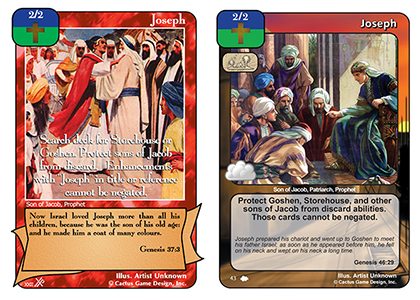 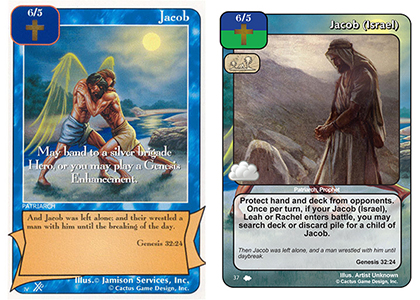 Both Josephs are Blue/Green, initiative Heroes, and are searchable by Rachel. Joseph is likely to be the main Hero that will utilize Creation of the World as he can use Enhancements such as Search or Answer to Prayer to search for it and he will often keep initiative to play it due to his low numbers of 2/2. The FooF Joseph is best when paired with Enhancements like Joseph Before Pharaoh, but the CoW version offers territory class protection so it can help maintain your board state from being wiped out even while not in battle, which is very relevant if using this deck in T2 multiplayer. The CoW Joseph is also a cloud Hero, so Faith of Isaac gets a bonus on him, helping you get to Creation sooner. Both versions have upside and you may even consider using one of each version as this can give you a choice of abilities for each particular game.

Jacob is a little bit different. The FooF Jacob I believe has the better ability since it can play Enhancements like Obedience of Noah and Reuben’s Torn Clothes before the opponent blocks, which are very strong plays. However, CoW Jacob contains green, is a cloud Hero, offers nice hand protection and has potential tutoring/recursion so he should not be dismissed too quickly.

Final thoughts and ideas to explore

Genesis is a very well supported group with Flood Survivors, Abraham related cards, and Sons of Jacob as major themes. There are many great Enhancement options besides those that have been listed so ultimately Enhancement choices and Hero selection really is personal preference. For a deck meant to use and abuse Creation of the World though here are a few ideas that may break from the norm. Cloud of Witnesses is very well supported within Genesis so you could consider having a mini cloud theme and utilizing the many cloud Enhancements available to Green & Blue to great effect. Hidden Treasures is useful for playing things pre-block with many of the Heros you will use such as using Noah to play The Flood pre-block. Having a few green cards such as Provisions or Two Bears could also be good.

Also, don’t forget about the Genesis support cards like Fortresses and Artifacts as they all are good. Genesis has notably paired well with Egyptians because of things like Seven Years of Plenty and Pharaoh’s Baker, but don’t be afraid to try other defensive ideas as well. Syrians and/or Magicians might also pair well with a Genesis offense because of Laban and his ability to create some nasty blocks, but those are certainly not your only options. The great thing about Type 2 is the diversity it offers—take advantage of it.

Schaefer gave some really great thoughts on the Creation of the World Genesis offense so I’ll just add a few other ideas I’ve tried with Genesis and blue in general. More so than most other brigades, I’ve found that the blue brigade has a lot of “splashable” Heroes that are not from its main theme (Genesis). If you aren’t using Heroes like Benjamin or Zebulun (which get disrupted by non-Genesis Heroes) as your main options, consider adding in a Patriarchs Ehud or a Warriors Ira to your blue Genesis offense since choose the blocker and FBTN are usually very strong plays.

Another fun trick is that blue has two High Priests: Eli the Priest (Patriarchs) and Ahimaaz (Kings). In my opinion, running at least two High Priests makes it worth adding Urim and Thummim, which can give a player a tremendous advantage. For example, knowing when your opponent has no blockers in his hand makes using a pre-block The Flood even more powerful. If you are using the Genesis Enhancements that don’t necessarily have to be used by a Genesis Hero (such as Forgiveness of Joseph), then the Apostles Thomas makes another great option for your offense. In a T2 MP deck, I might consider adding Womens Claudia because I would expect at least 1 or 2 of the other players to have some N.T. male Heroes she could band to. Thanks for reading and check back soon for another article as we continue to tackle the diversity of T2!

Joe (The Schaefer) was introduced to Redemption shortly before the release of the Angel Wars expansion but took a hiatus from play until the end of 2014 due to military service. Since returning to the game Joe has been a regular face at tournaments in Texas and attended his first Nationals in 2016. While Joe enjoys playing Redemption, he enjoys deck building and the fellowship of other players more than gameplay itself. Due to this, Joe normally finds himself playing booster draft and Type 2 as he is a fan of the creativity that these formats offer while deck building. View all posts by Joseph Schaefer here...

One thought on “Tackling Type 2 Diversity”