Revelation chapter 5 portrays an amazing scene in Heaven. It begins with a book which no one in heaven or on earth is worthy to open. Then one steps forward who is worthy – the only one who is worthy. He is the Lamb who was slain, the Lion of Judah, the root of David, our Messiah, Jesus Christ. He steps forward and all Heaven breaks out in worship! Have you had a moment where you’re worshiping with a crowd of people, maybe at a concert, at church, at a conference or a camp and it’s so amazing it gives you goose bumps? Multiply that exponentially and you might be getting close to what’s taking place in Revelation 5! Then, an amazing series of events unfolds…

As the Lamb breaks each of the seals it triggers an event, most of which are viewed as God’s judgments against the people of the earth. When the seals were first printed way back in the Warriors set, they were represented by silver good Enhancements. When we decided to reprint them we wanted to add a new twist to them this time.

To begin with, each seal started as a silver good Enhancement, then after battle it converted to a different card, often an Evil Character, that represents the being or event resulting from each seal being broken. During our testing we found that requiring the seal to be played first as silver was too restrictive. We took the seals through a redesign to make them function as dual affiliation cards at face value. There was still a good bit of tweaking along the way, but those are much closer to the finished versions I’m about to show you.

Because we wanted some of the seals to grant one effect if they were played as a good Enhancement and a different effect if they were played as an evil card, the abilities got long very quickly and we were pretty limited in what we could do. As Justin explained in his article about the Bowls of Wrath, once we came up with using the icons to indicate how to play the card as each different type it greatly freed us up to make the cards do more of what we wanted.

There’s much debate over what some of the seals represent. I won’t take the time to get into all of that here. We tried not to lean to heavily to any one view point. We wanted each of the first 4 seals, known as the Four Horsemen, to have two evil brigades making sure that all 7 evil brigades will be represented among them (with one showing up twice).

The First Seal / Conquer is believed by some to have fulfilled a prophecy about Rome, at least in part. Others believe him to be the anti-Christ. While our card doesn’t necessarily represent either one directly, that did give us two evil brigades to use – gray and crimson.

As the first of the Four Horsemen, he gets to lead the others into battle and grants a nice effect when he does! 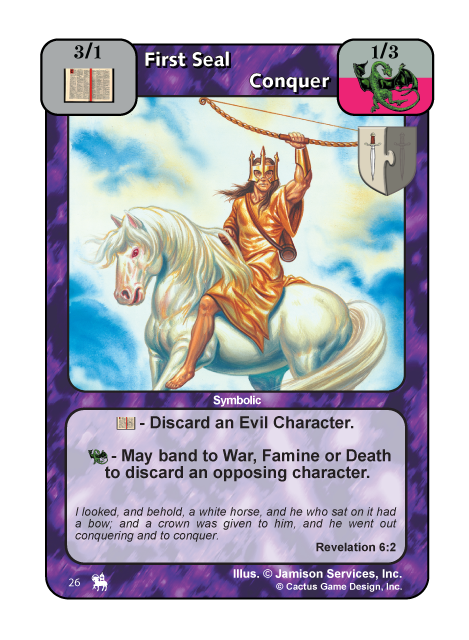 The second seal was chosen to be pale green and black because those brigades represent death and calamity. The scripture says he was given a great sword and he’s named “War” so we allow him to search for a weapon. There are some pretty good ones in his brigades! 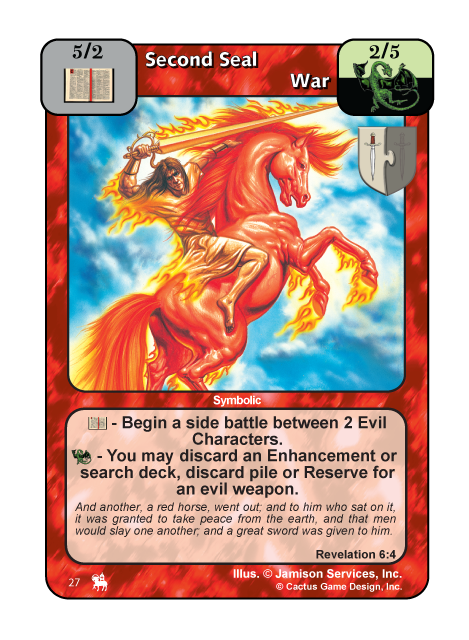 The third seal represents famine putting him in the evil gold and brown brigades. We had a much harder time settling on an ability for this card, but in the end found something that feels very brown and gold. 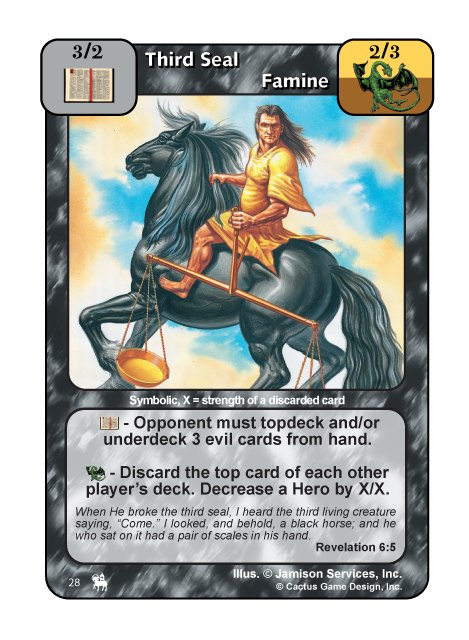 As the only one of the Four Horsemen to exist in the game prior to now we decided to pay homage to the previous version by using pale green on the new one as well. The passage says that hades followed him leaving this a clear choice for the orange brigade. 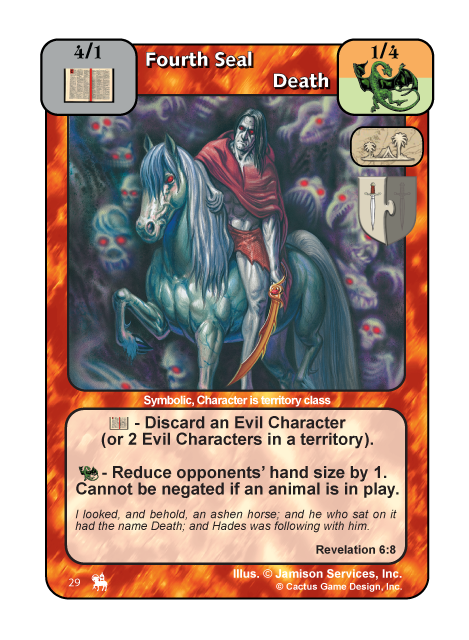 While the Four Horsemen are the most well known of the seals there are still three more to go!

Unlike the first four seals, the fifth seal doesn’t directly represent evil. Instead we see those who had been martyred for the Lamb seeking justice against their foes. 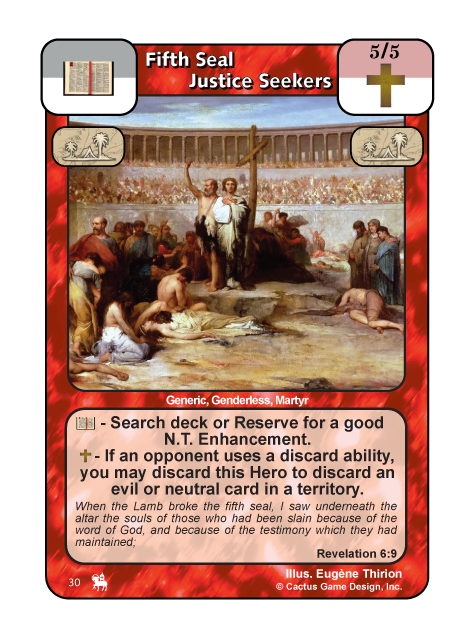 When the sixth seal is broken the scriptures say that the sun becomes black and the moon like blood. That sounded very much like it should black and crimson brigade card to us! 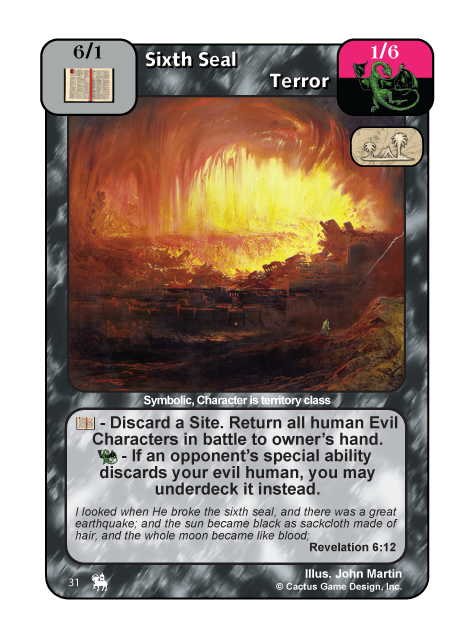 Up to this point we had made each of the seals three brigades to keep them unique in both Type 1 and Type 2. Similar to the Bowls of Wrath, we felt that they are events that only happen one time.

In the scriptures the seventh seal really gets things going with all seven trumpets! We did use a tie in to the trumpets, but for our cards we decided to focus on the very beginning, the part where there was silence in heaven for about an hour. That means that the war in heaven ceases, at least momentarily. 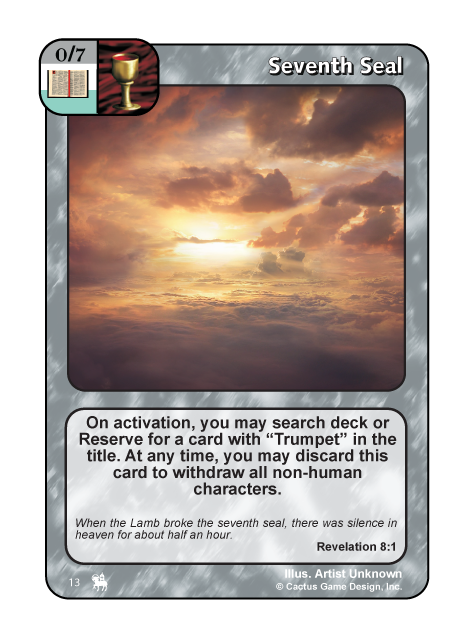 You might have noticed that a few of the characters above have an identifier “Symbolic”. This is a new term that some board members helped us come up with. It applies to a character that is not human, not demon and not animal. It will apply retroactively to old cards like Doubt and Madness, but is also a good fit for these characters who are surrounded by controversy as to what they actually represent.

4 thoughts on “Worthy is the Lamb”