Why so Sad? So far we haven’t seen much diversity from the evil cards – Lot’s of orange, some Kings and Merchants but that’s about it. Don’t worry, I’ve got the fix for you today. For years we’ve had jokes about black being weak. I think we may finally put those to bed for good this year! 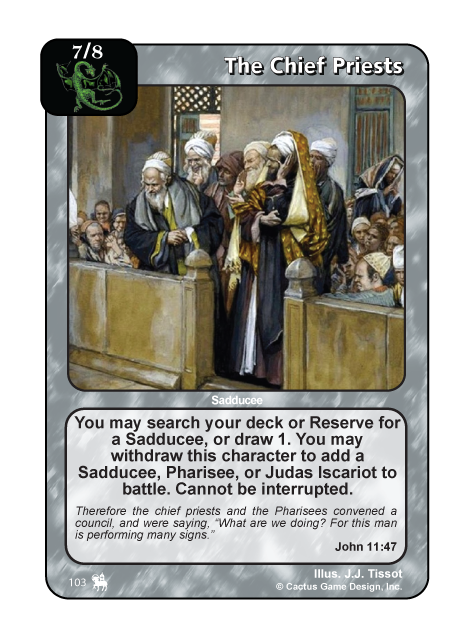 The best comp for this card is pretty simple – It’s Angel under the Oak for the Sadducee theme. It doesn’t allow you to recur the best of them, and if you’ve already drawn them you won’t be able to surprise your opponent with them. This is probably okay since Oak is pretty insane, this guy is merely really, really, good. The one benefit he does get above Oak is the ability to go get niche Sadducees from the Reserve. Take Disbelieving Sadducees for example. Not really a main-deck card, but really good in the angel matchup. Chief Priests can also be splashed into a Pharisee deck for a little extra speed, or paired with a crimson defense give a D1 to Judas. 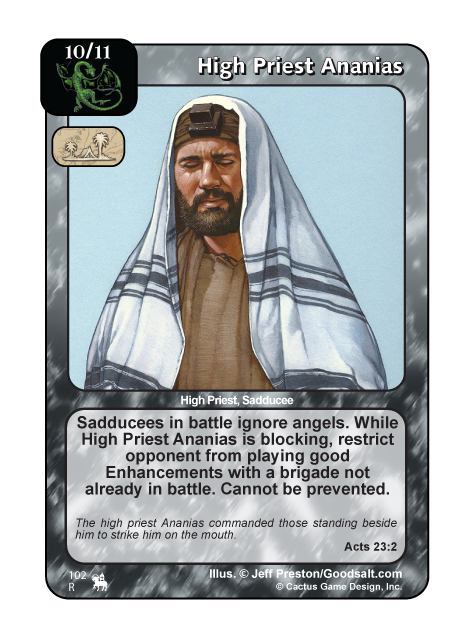 Wow! Talk about an amazing character! Putting the punish on angels (sure to be popular this year) from territory, and a fun new unique ability that punishes some of the most popular decks from last year. Good luck playing Faith of Enhancements while this guy is around! One of our goals with this set was to punish players for playing ‘splash’ style offenses. Keep it to one brigade and you’ll be just fine. 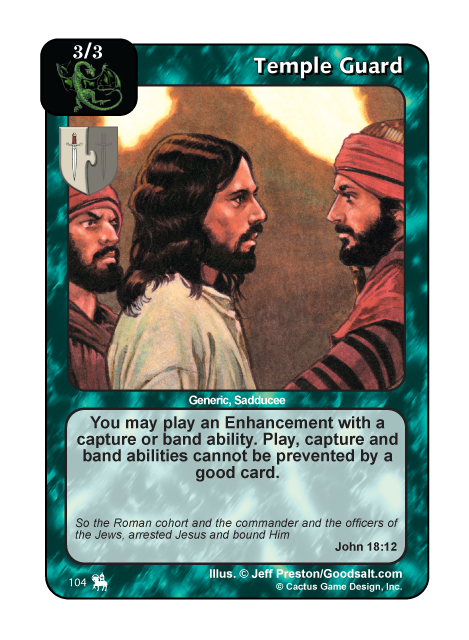 Our last Sadducee is a reprint of Temple Guard from the starter decks – A boring no special ability guy with bad numbers. This version is way cooler, and a big help against guys like Moses, Captain of the Host and The Strong Angel. He grants cannot be prevented to capture (and band) abilities, super appropriate. These are the guys that arrested Jesus after all. He also allows you to play an Enhancement with a capture (or band) ability, giving Sadducees the “horses” type effect they’ve desperately needed. He’s really good when he plays Seize Him! Win the battle, and get a Confusion type effect all at once! 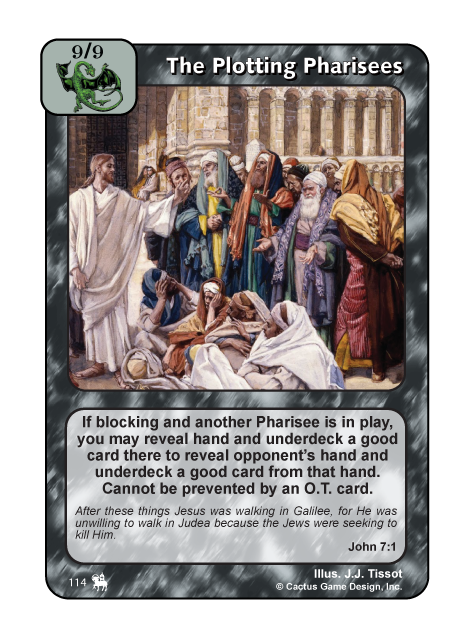 Pharisees haven’t gotten a card in a while, and these are from our source material (John’s Writings) so we worked them in. They’ve got a pretty good ability. Your weakest good card for your opponent’s strongest one. They’re also Huge! 9/9 stats gives the Pharisee theme a guy that can stand up against Benaiah or Ira without having to splash in various Emperors. Why did we call these guys The Plotting Pharisees? 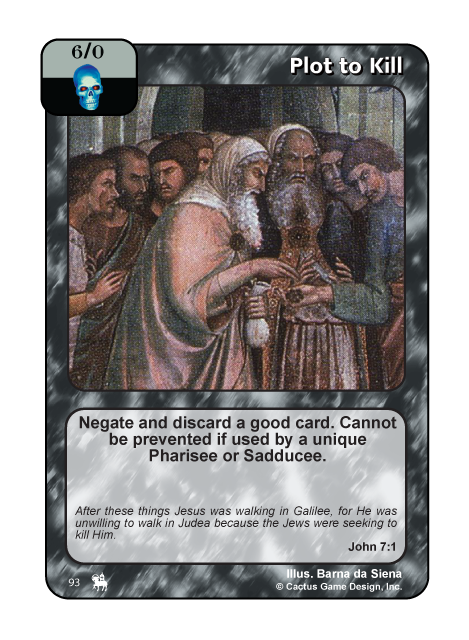 Because they were seeking to kill him! The verse says that the Jews wanted to kill Jesus. This was almost certainly the leaders of the two sects, Pharisees and Sadducees so we were able to make this black and gray. It’ll always work on guys like Proud Pharisee but it’ll get really good on guys like High Priest Ananias where it gains CBP.

Be sure to check back again soon because we’re spoiling all the remaining cards from Revelation of John this week!