In Revelation 16, John describes a sequence of apocalyptic events that are brought about by the pouring out of seven bowls. Referred to as the “bowls of God’s wrath”, these bowls were poured out by the seven Angels of Wrath upon the earth.

Early on in the development process, the Bowls began as silver Enhancements because they represented the wrath of God. However, we were also looking for ways to incorporate the other brigades so the set would not be quite so dominated by silver cards. The “Faith of” Enhancements in Cloud of Witnesses worked so well as dual color cards that we decided to do something similar with the bowls of wrath. We decided to not only give each of the seven bowls a second brigade, but also make them dual alignment Enhancements and give each one a different evil brigade as well because even though they were of God, the judgements were still terrible things. We decided that since the clay brigade had gotten so much support in Cloud of Witnesses (with all the aforementioned “Faith of” Enhancements), that we would use the other 7 brigades—in addition to each one having Silver—for the bowls of wrath. Now we didn’t necessarily want them to have similar effects as good and evil cards, so we came up with distinct abilities—the “good” ability was always preceded by “If attacking” and the “evil” ability was preceded by “If blocking.”

However, having to include those two phrases on every card was taking up a lot of space and limiting the abilities to being rather simple. I mentioned to Gabe that perhaps to save room, we could simply put “Good:” followed by the ability that would activate if played on a Hero and “Evil:” followed by the ability that would activate if played as an evil enhancement. That seemed like it would work, but then Gabe took the idea one step further. Last year, he had written an article for Land of Redemption called “Iconic” (if you’d like to read that article, click here). In it, he described the possibility of using Redemption icons to save space on abilities. Feedback for this was generally positive though several people (myself included), were wary of using too many icons in special abilities because they might confuse newer players. However, the icon idea would work perfectly for these cards as it would be away to signify which ability triggered based on how the card was used. The cards turned out great and we ended up using the idea for the Seals as well, which you will see in an article later this week.

The First Bowl of Wrath is described as causing sores on those who had the Mark of the Beast and those who worshiped the Image of the Beast. Because it was similar to one of the plagues of Egypt, we decided to use gold for the second good brigade and give it the ability to decrease the opponent’s Evil Characters. For the evil side, it related to the beast so we made the evil brigade orange and gave it the ability to retrieve an Idol (such as Image of the Beast) and activate it. 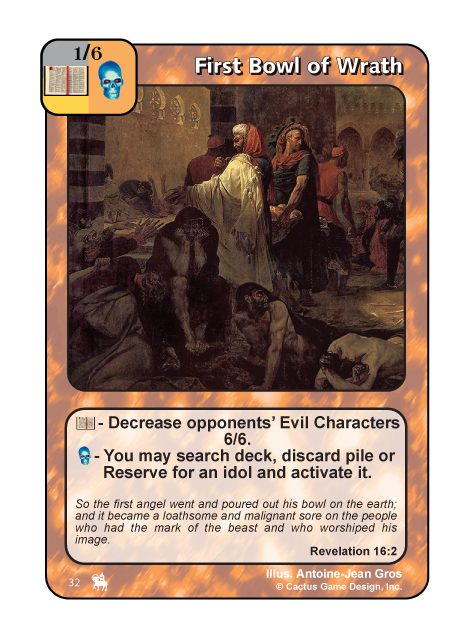 The Second Bowl of Wrath was poured into the sea and the sea turned to blood causing everything living thing in it to die. Because of this, the Second Bowl of Wrath can discard an Evil Character or two animal Evil Characters. For the evil side, it felt very appropriates for this to discard all cards in battle. The addition of blue as the second good brigade and pale green for the evil brigade makes me think this card will fit very well into a Flood Survivor/Antediluvian deck! 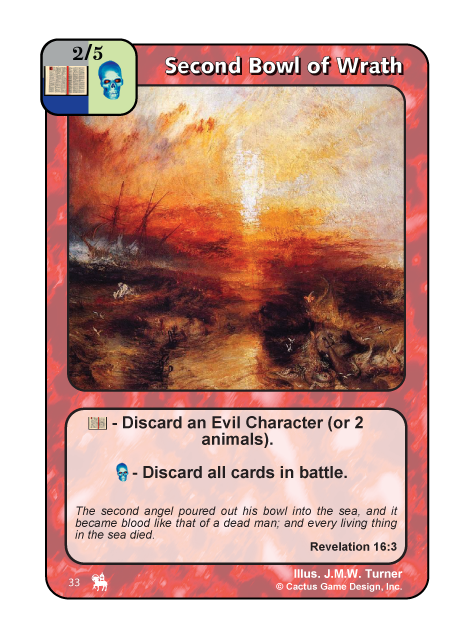 The Third Bowl of Wrath was poured into springs and rivers, and they also became as blood. This judgment was justice for the saints and prophets who had been martyred for their faith in God. Because this card relates to martyrs, the good side was given white brigade and can discard evil cards based on how many martyrs you have in your discard pile. If you have not done so already, check out the recent article on martyrs here. For the evil side, the crimson brigade (the color of blood) was chosen and the ability is to discard a Hero or two martyrs. 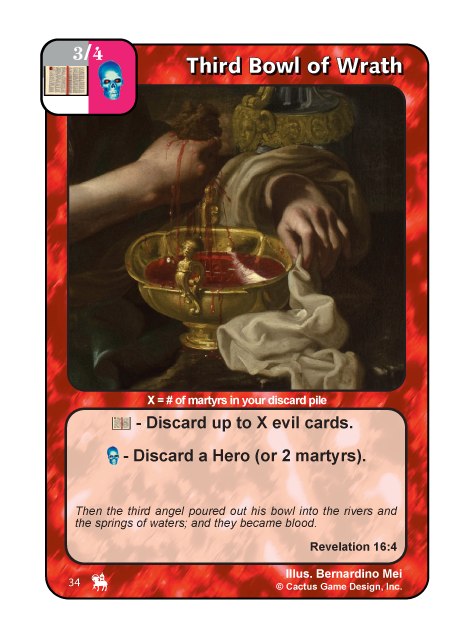 The Fourth Bowl of Wrath was poured on the sun, and it was given power to scorch people with heat. Consequently, the Fourth Bowl was given red as a second good brigade and evil gold as the evil brigade—colors often associated with the sun. The Fourth Bowl allows you to banish an evil human and an evil card in opponent’s hand. Keep in mind though, that if banishing the evil human causes special initiative, you do not get to banish the card from opponent’s hand before they have a chance to negate during special initiative. As an evil card, this can negate and discard a good Enhancement or Covenant. 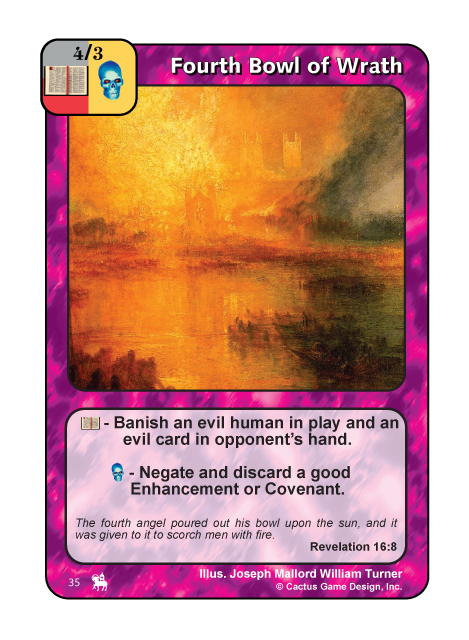 The Fifth Bowl of Wrath was poured out on the throne of the Beast and his kingdom was plunged into darkness. Being another similar event to one the plagues of Egypt, we gave this Bowl green brigade (the good brigade associated with the Exodus) and black for the evil brigade because of the relation to darkness. Because the Fifth Bowl was poured on to the throne of the Beast, it can discard an Evil Character or an Evil Fortress. Similar to the Fourth Bowl, this card can negate and discard a Good Enhancement or Covenant. 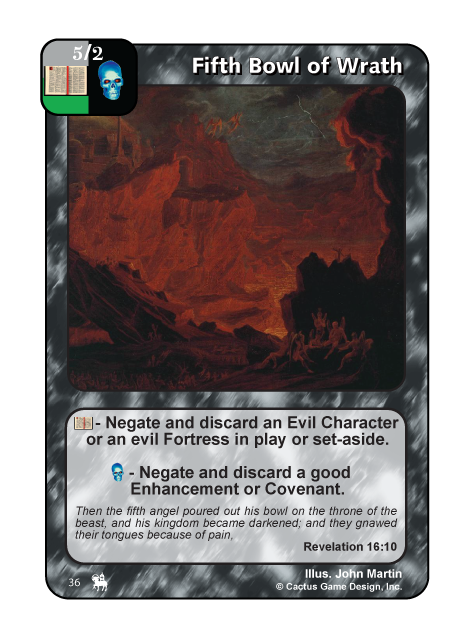 The Sixth Bowl of Wrath was poured out in the Euphrates river which dried up and allowed the Kings of the Earth to be gathered together by the 3 Frog Demons that were summoned from the mouth of the dragon, the mouth of the Beast and the mouth of the False Prophet. Because of the connection to royalty, we gave the good side purple and the evil side brown. The good side can cause your opponent’s evil cards in hand to “dry up” by forcing him to discard two evil cards from hand. On the evil side, you can place the Sixth Bowl in territory and then banish it to add your evil human king to battle. 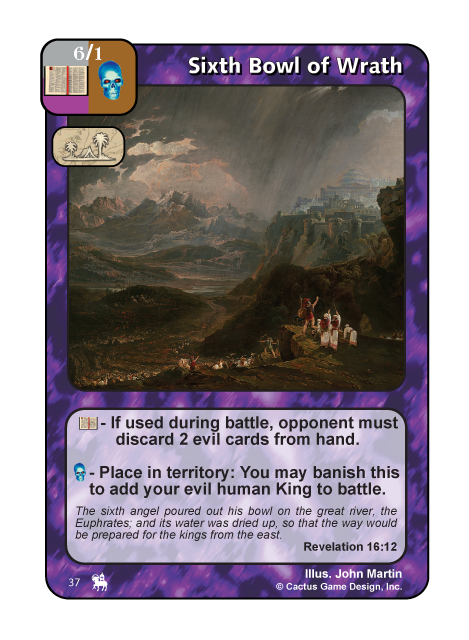 Last but not least, the Seventh Bowl of Wrath was poured out on the air, and it caused thunder, lightning and a great earthquake. Cities collapsed due to the severity of the earthquake so the Seventh Bowl has the ability to discard an evil card or Site as a good card, or to negate and discard a Good Enhancement or Fortress as an evil card. Because of the earthquake that destroyed cities, we decided that teal was a good addition as something very similar happened to the walls of Jericho. The Seventh Bowl also brought down hailstones, which are often dull white or grayish in color so adding gray as the evil brigade fit.

That’s all I’ve got for now, hope you’ve enjoyed reading about the Seven Bowls of Wrath and how they came together. I fully expect these to show up in a lot of decks this summer because of their great versatility and powerful abilities! Make sure to check back tomorrow as we continue to preview the final sets of cards from Revelation of John!

5 thoughts on “Ain’t No Lucky Charms in these Bowls!”