We all know that the title is incorrect – 6 X 6 = 36 – But what if you had a bad teacher? And they were leading others astray? What if you genuinely believed that 6 sets of 6 was only 21 because that’s all that you were taught? Today’s set of cards focuses on false teachings.

The book of Revelation opens with John’s Letter’s to the Churches. In them he talks to Christians about things they need to shy away from. When we laid out our set we noticed lots of Orange on defense. In an attempt to diversify we pulled 3 cards from these letters that illustrate John’s points. 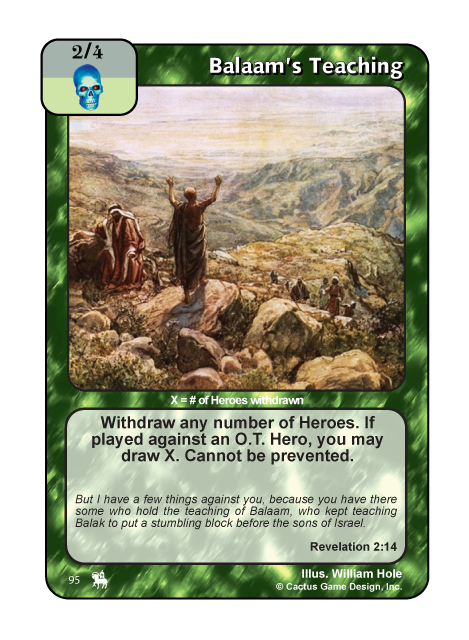 With Balaam’s Teaching we attempted to put a new spin on anti-banding. We’ve had cards like Scattered and Abandonment for a few years now. This card punishes banding in a slightly different way. It can be negated, but if used against an O.T. Hero you get to accelerate a little. Great when you withdraw 4 or 5 characters from a Throne of David band. This card is tricky in another way as well. Because you control how many Heroes withdraw, you don’t necessarily have to pass special initiative. If your opponent comes in with Joshua, Son of Nun and Captain of the Host. It’s a fairly safe bet they don’t have anything to play on Captain (unless he’s the warrior class version, in which case look out for Swords! If you block with a 6/7 Evil Character (say Balaam) and play this, you can choose to withdraw Joshua, draw 1 and stalemate against Captain. Or you can withdraw both and draw 2, hoping they don’t have Ehud’s Dagger. Flexible abilities make for interesting gameplay decisions. 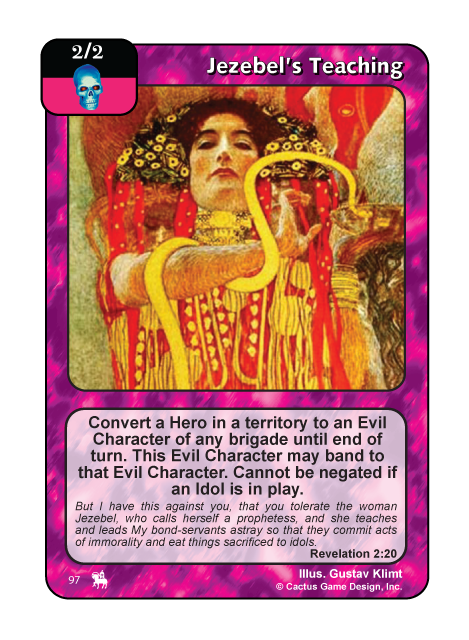 This card is another instance of good people being taught poorly. When you sin you only end up helping evil forces. Diotrophes, Philetus, and Hymenaeus form the core of a pretty good defense that can branch out into either crimson or black, or splash a little of both. Whatever you decide, this card will be a benefit. Similar to Falling Away (CoW) this card gives you the opportunity to force your opponent into a bad choice – Lose the rescue, or kill one of their best Heroes. Because part of Jezebel’s heresy involved idols, this card gains a huge benefit if an idol is active. Remember Outsiders (Cabiria) from last week? These cards look like they’d work great together! 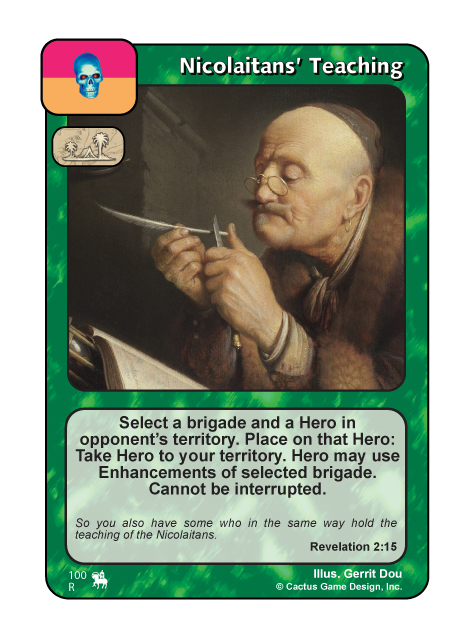 Continuing the idea that Heroes being deceived by heretics being used in unfavorable ways we have this unique card. It doesn’t convert a Hero like a lot of crimson Enhancements do. It merely steals him for your opponent’s use. A good reminder that God is sovereign over all, and that even in the midst of deception good things can be accomplished.

All three of these false teachings are still prevalent even today. John’s Letters, and the entire book of Revelation, holds lessons that apply equally to his recipients at the time, and us now. The world can be a scary place. Look to the One who guides, read your Bible. At the end of the day Redemption is a fantastic game, but it’s only a game. The most important part of a card isn’t the name, the numbers or the special ability. It’s found on the bottom, the scriptures that we draw inspiration from. That’s true teaching.