“Take your roughhousing outside” Did you ever hear that phrase when you were younger? If you have siblings like I do I’m sure you’re familiar with it. Last year in Redemption we had two pretty big siblings in Throne decks and BoM (Because of Moses) decks. They got a little rough with each other – So Mom (Us Playtesters) is kicking them outside this year.

Using this verse as inspiration we developed a set of generic characters designed to push the Meta in new and interesting ways – We call them ‘Outsiders’ when Throne and Moses go outside they have to deal with these guys. Let’s look at the first one: 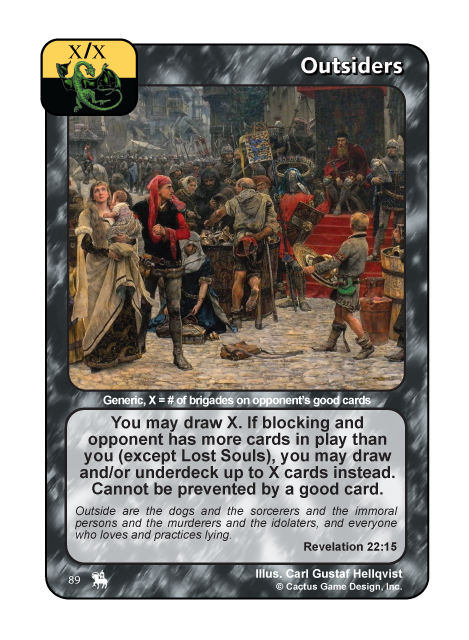 Outsider #1, or as I affectionately like to call him ‘Cowboy’ due to earlier art we rejected, is in a new and exciting set of brigades – Black and Gold. This isn’t a combination we’ve seen on an evil character before, and we hope along with Abandonment and Slayer’s Glee, that this might push people to combine the two. Splashing is all the rage right now, so this Outsider attempts to punish players using tons of brigades. You’ll always have the option to draw a little, or if you’re behind you can play a little catch up. At worst he’s a negateable Emperor Vitellius, at best he approaches Hypocrisy level tempo. He’s just the first card that you might run into out in the wild.

Outsider #2 (Cabiria) brings the pain to fast, speedy offenses by allowing you to get a powerful idol and activating it right away. If they have more resources than you, your opponent doesn’t get to respond to this. Did you opponent open up with a big band? Go get Household Idols and win the battle without another card against a banding Hero. Did you opponent drop turn 1 Throne but you need initiative? Go get Image of the Beast and stop that trigger. His Brown/Crimson pairing continues a slew of characters from last year like Doeg and Lions. While there isn’t an overarching theme to tie them together, they all offer very powerful effects that can do some serious damage. 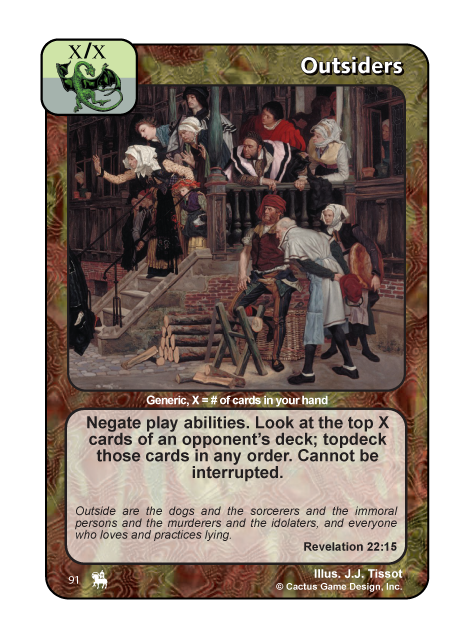 Our last Outsider doesn’t have quite as powerful an ability as the first two, but his brigade pairing is to die for! False Peace and Confusion access? Playable in the theme with Divination? I love the trickery that his ability allows for. Did your opponent just use David, the Psalmist and leave the cards on top? Block with Lookey-loo and bury those cards deeper in the deck. Are you being soul-droughted? Use this guy and bring Imitate (Lost Soul) or Darkness (Lost Soul) to the top. He’s fantastic in Multiplayer as well, allowing you to set up whichever player you need.

Maybe after getting blocked by one of these dudes Throne and Moses will settle down and keep their play inside! These aren’t even all the cards we were able to pull from this verse – Stay tuned for more bad dudes in a future article!

6 thoughts on “Take it Outside”