The other day we released a preview of the new Paul promo that was primarily based on the Community Created Card project that Gabe helped organize. As Gabe wrote in his preview article, we went through several iterations of testing with Paul and tossed around many different combinations of ideas pulled from the suggestions submitted by the Redemption community before finally landing on the version that Gabe shared.

As a team, we were pretty satisfied with where Paul ended up, but upon posting the card, we received some additional good feedback almost immediately. One person mentioned that Paul would negate Miraculous Handkerchiefs, a solid support artifact from the life of Paul that will certainly see more use after the release of the new set. Another person with knowledge of some of the cards in the new set mentioned that Paul would negate a new card that is going to be a great addition for missionary Heroes.

Several of us began texting each other…was there a way to fix this without drastically changing Paul? We knew from past experience that making last minute changes could lead to cards that ended up warping the meta (yes, we’re looking at you Thaddeus). However, we believe we found a balanced solution that both enhances Paul and could keep him in check a bit as you’ll see below. 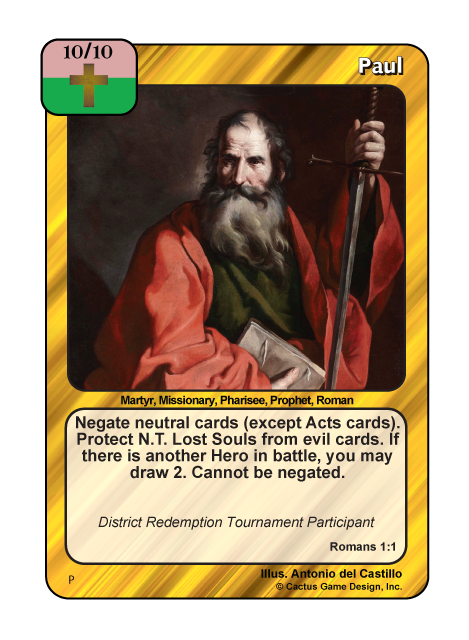 This new version of Paul negates neutral cards except for those found in the book of Acts where the story of Paul primarily takes place. Paul will not negate his Miraculous Handkerchiefs allowing you to heal Paul if he is about to be discarded. Also, don’t forget that the Apostles set also had a version of Miraculous Handkerchiefs that has some playability. (Is Darius’ Decree stopping you from using those great set aside enhancements like Provisions and Pentecost? You should take another look at the older Miraculous Handkerchiefs and prepare to have your mind blown…mine sure was.) However, it’s also important to look at what else Paul no longer negates. Unholy Writ is still a commonly used Artifact, and it makes a lot of sense that Unholy Writ is not negated by Paul. The Unholy Writ was used by Paul in his old life when he was the murderous Saul who had countless Christians imprisoned and killed before his miraculous conversion on the road to Damascus. There are also many Acts Sites that Paul will not negate, most of which come directly from Paul’s story, such as Roman Prison, Lycaonia and Lystra.

I believe there are two important things to take away from this. First, we are fortunate that Rob has allowed us to involve the community in the development of Redemption. He has mentioned to our team many times that Redemption belongs to God and also to the players who support it. While not everyone can be on the playtest team, we value the feedback, suggestions and ideas that come our way whether it’s through interactions at tournaments or looking at posts in the New Card Ideas section of the forum. Secondly, it’s not an easy job to create great cards. Some cards come together so nicely and fit so perfectly that we just know they are going to be great cards. However, other cards create a bigger challenge and sometimes unintended aspects of a card are not discovered until it’s too late to go back. Sometimes this leads to the “unintentional combos” that gives Redemption such great variety and at other times it might mean giving errata to a card deemed too powerful.

Even as a community, it didn’t dawn on us until almost too late that Paul was going to negate some of the cards most associated with the story of his life. Personally I’m really glad we were able to make this change as I believe it will serve to better represent the story of Paul without creating a situation where all of a sudden our new Paul card will warp the meta because of an untested last minute change. For those of us who survived the days of “Cannot be interrupted” Thaddeus crushing everything, I believe we can all appreciate that.

8 thoughts on “Stop the Presses!”