This year’s State promo is going to bring us a card that is quite different than anything we’ve seen before. He brings a number of new twists to the Hero card type that we believe will be a great asset to certain deck types.

One of our focuses for “Move Over Bacon” (MoB) has been to empower the control archetype while still promoting interaction in both sides of the game (offense and defense). Time will tell if we’ve done a good job at that or not.

My good friend Sam helped me a great deal with fleshing out some of the concepts that we wanted to see run through MoB. Sam is an brilliant man, with vast gaming experience. He has a great deal of knowledge on strategies and game mechanics. He’s been an invaluable part of the design team for MoB.

Sam was very aware of the limitations the themes for MoB gave us in the scriptures. When he came to me with Fearless Traveler he was excited about the idea but thought it would need to be something we save for a future set since it’s taken from an area of scripture we aren’t touching on this year. What he wasn’t aware of is that the State promo spot had not been decided upon yet!

Enough About Sam, Tell Me About the Fearless One!

For starters, our “Traveler” based on a very popular passage in the Psalms. In fact, it might be the most popular Psalm, #23. Being based on a Psalm means that this Hero “involves music” despite not being a musician himself. That means he can be targeted by Music Leader’s search ability!

Fearless Traveler allows you to cycle cards from your hand back into your deck, helping you to dig for the card(s) in your deck that you need. Unlike a draw ability, his ability isn’t going to create more Lost Souls for you to defend, unless you run across a Lost Soul that you want to have in play. You also get to topdeck or underdeck any of those cards, which can be a huge bonus for certain strategies that interact with the top and bottom of your deck!

To ensure he’s not an auto-include into every aggressive deck his “X” works based on having defense, namely the number of Evil Characters you have on the table. By giving him this condition our hope is that he is able to be a Hero that can help a control deck keep up with today’s aggressive offenses.

With low stats, he’s often going to have initiative to play your favorite white battle winner(s). In the event that you’re just using him to cycle cards, he’s not likely to give up initiative so your opponent won’t be able to implement their brutal defensive plan against you. Just let him get discarded by the numbers and get him back with Music Leader or Eternal Covenant.

Here he is in all his beauty! 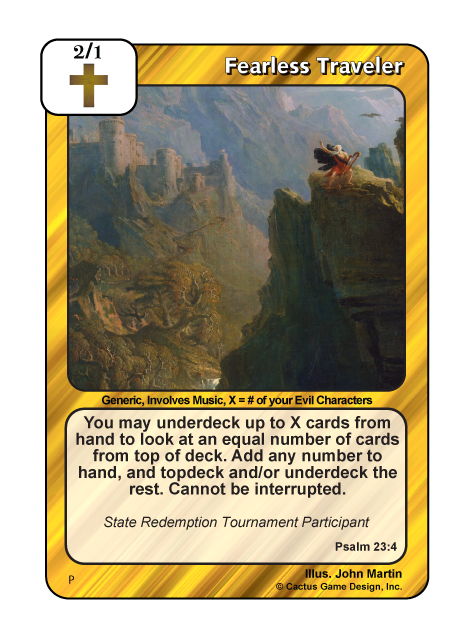 Join us tomorrow for Throw Back Thursday and again on Friday for a peak at our new Regional promo!