The story of this promo begins unlike any promo we’ve had before. Not with the games creator, Rob Anderson, not with the play testers and elders, but with the Redemption community!

After winning T1-2P and the honor of being able to create my own card I was having a hard time coming up with something unique for my player created card. When I finally did come up with something my fellow elders determined that it would not be a good choice for a player created card because it did things that a normal player would not be allowed to submit. They rightfully determined that we cannot set that type of precedent. Back to the drawing board for me.

A lot of my time an energy were focused on fleshing out “Move Over Bacon”. That’s when I came up with the idea of having the community create my card for me! I began a project on the message boards soliciting input from the community. You, the players came up with two cards that you really wanted putting me in an awkward position because I only get to make one player created card. That’s when Justin Alstad asks me, why don’t we make both of the community created cards as promos?

As is often the case, Justin is brilliant. We slotted the community created cards as promos for the coming year! That still left me with nothing for my player created card, but that’s a story we’ll have to continue another time.

After several steps, the players came up with the really cool reprint of The Watchman you see here: 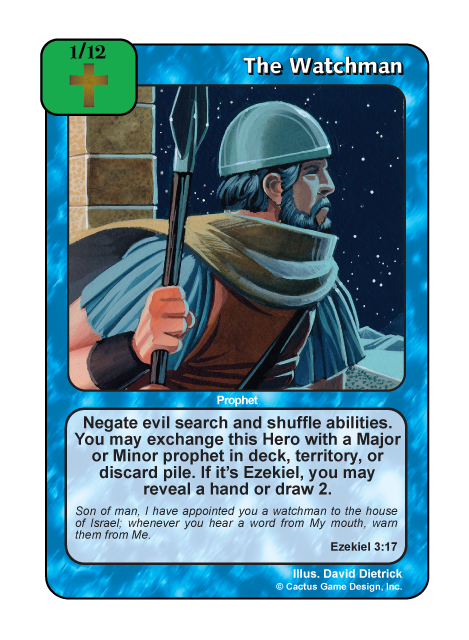 This card tested really well. It’s been an effective tool for a green prophets deck, giving strong options but not over powered. We only felt the need to make a couple minor changes to the final version chosen by the players.

We expanded the locations this Hero can exchange with to include a new zone we’re going to introduce to the game when “Move Over Bacon” is released later this spring. The zone is called the “Reserve”. You can expect a full explanation of what that means and how it works next week.

We prefer that exchange abilities are “cannot be interrupted” to avoid messy cascade negate situation that can come up without it. That adds a little additional power to The Watchman too.

The result gives us this card which we’re sending to print soon! 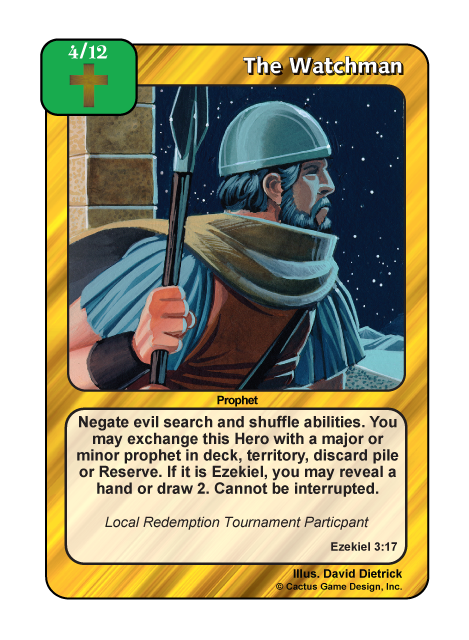 Thank you Redemption community for giving us our new Local promo for 2017! This is going to be an amazing addition to green prophet decks everywhere!

Tune in tomorrow to find out about the new District promo!