A long time ago, way back when we released Women of the Bible as the 3rd Redemption expansion, we printed Jochebed. 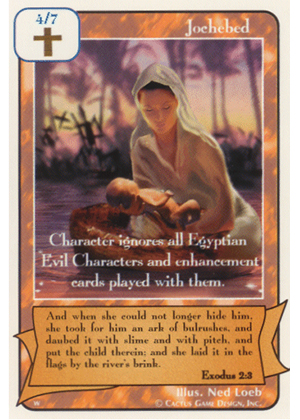 She was one of the first pre-block ignore cards printed. She had limited targeting, especially considering Egyptians weren’t really playable at the time. She would soon be overshadowed by her son and her daughter. When it came time to print the Cloud of Witness set we knew Moses (CoW) would be a big part of it. We also knew Moses’ Parents would be there as well since by their faith Moses was protected.

About halfway through the playtesting process I asked the question why we were printing them as Moses’ Parents and not by name. At the time we didn’t realize Moses’ father is named in the Bible. In Hebrews they are only referred to as Moses’ Parents.

Some time later I was doing a Bible study and found the name of Moses’ father in Exodus 6. It was too late in the process to change it. But when we found out about the opportunity to do the Nationals borders I pressed the issue and now instead of Moses’ Parents we have: 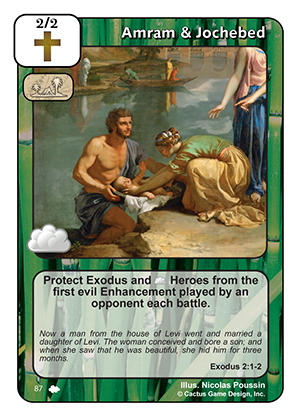 Of course, it wouldn’t be complete without updating their faith as well: 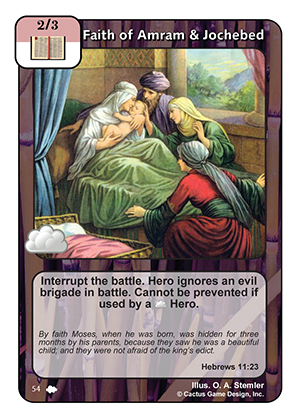 Both these borders got the same reed style background in different colors to tie them together to their part in the story of baby Moses. It is worth noting that as Jochebed and Moses’ Parents are both unique characters you can’t have both in play at the same time. The same is true here, Amram & Jochebed can’t be in play with either of them.

Name on name bonusing is also affected by this change. You’ll probably want to make sure you get both of these cards if you go to Nationals, since playing Faith of Moses’ Parents on Amram & Jochebed will only be worth 2/3 not 4/6 (and vice-versa).

Even with these minor rules to be aware of, we think these cards are well worth having, and look forward to the excitement of Nationals where the rest of the set will be revealed!