Hello everyone and welcome to our second installment of Cloud of Witnesses Combo Musings! (view Part 1 here) As before, I will be commenting on more combos with the new CoW cards. These combos are supersized. Extra Cloudy, made from the finest CoWs. Don’t hold the fries.

So, we finally get a flood card! Titled “The Flood”, it is like most other mass destruction cards: Not the easiest to use effectively or in a way that stops your opponent from negating it, but potentially amazing. Here it is: 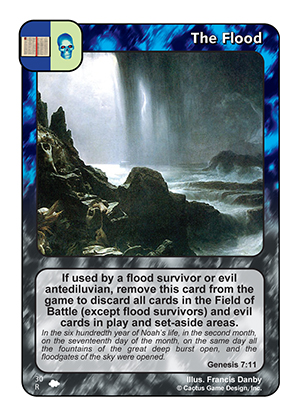 A cute combo to make The Flood CBN is to play Faith of Samuel on Noah, band in Benjamin and Jacob (FooF), and play The Flood off of Jacob. Benjamin makes Genesis enhancements CBN; he doesn’t actually have to play them. Also, note that Faith of Samuel will always net you a D3 if Benjamin’s requirement is met (all your human heroes are Genesis). This combo can even be played preblock via Hidden Treasures.

Noah needs some further discussion. He has what I like to call a “hidden ability”. He’s the lynchpin of the small flood survivor theme, but his ability has some amazing flexibility: 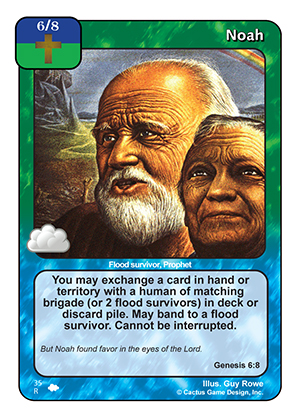 “You may exchange a card in hand or territory with a human of matching brigade in deck or discard pile. Cannot be interrupted.”

Now you can see that Noah can search out or recur ANY. HUMAN. CBI. The evil character recursion is what I want to focus on here though, since it’s so much more difficult to do than hero recursion (except for demons). AotL targets in territory like Gomer, a magician holding Magic Charms, Naaman, Nergalsharezer, Antiochus, Foreign Wives, Priest of Zeus, etc. can all be recurred. Indefinitely. And what about chumpy ECs? Sabbath Breaker, Uzzah, and Emperor Vitellius, anyone? You can even recur Seven Sons of Sceva to get back your Orange demons like King of Tyrus, Wandering Spirit, and Messenger of Satan! It’s not a pure recursion, as you have to exchange a card of matching brigade. I’m sure you can find plenty of creative ways to minimize this cost, such as using Ezekiel DAEs to exchange for Crimson ECs, Isaiah DAEs to exchange for Pale Green ECs, etc. The fact of the matter is, the best human ECs are always going to be more valuable than the card you choose to exchange with them.

With Noah’s potential in mind, now throw in Shrine to Artemis to your calculations. Shrine “undoes” convert and set-aside abilities, most notably Holy Grail. Noah + Shrine just about guarantees that any EC you want to keep blocking with, you can. Capture and Removal From The Game are the only two ways to permanently remove an EC from the reach of Noah + Shrine, and these abilities are not that common on good cards. Shrine also has excellent compatibility with a few other cards that work well with Noah and the evil antediluvians: Faith of Jacob and Stalks of Flax! You can use these cards to take your opponent’s cards, which you can use to pay the “costs” for Noah, Shrine, Corrupt People, and Continuous Evil. I don’t know if a deck designed around these cards would be competitive, but I bet it would be a LOT of fun to play. With Noah, Shrine, Damascus, and Syrian Mercenaries, you could conceivably make a deck that blocks with Antiochus just about every single rescue! And if you use A New Beginning in your flood survivors deck, House of Rimmon gives you another good reason to try out Syrians as your defense, as it protects your Syrians from shuffle.

Actually, now that I think about it, Laban can take up to two male human heroes from your opponent with his ability. Then you can shuffle them away or discard them with Noah, Shrine, Corrupt People, and Continuous Evil. And he’s a Genesis EC that can use the discard on Wickedness Abounds. And he’s Syrian. Hmm…

The new Joseph hasn’t made much of a splash yet. Based on initial reactions (or lack of reactions), I’m thinking little Joe is getting ignored (that’s a pun – you’ll get it later). But he could potentially be amazing. Here’s his ability: 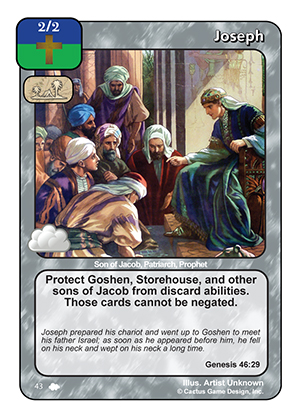 The old Joseph wants to be rescuing every turn and playing his CBN enhancements; the new Joseph wants his brothers to be rescuing every turn. Not only does he protect them from discard abilities, but he grants them CBN. Imagine attacking with a CBN Simeon/Levi band and activating both of their abilities! Levi’s discard is harder to trigger, but Paul’s Belt is a fairly easy way to get a Genesis hero into your opponent’s LoB. Dan’s D2 or discard becomes CBN; Asher’s recursion becomes CBN. And the big one: Zebulun gets a CBN Ignore. The new rules about Ignore make it easier to get an EC in battle, but they actually make it much harder to successfully block a CBN Ignore ability.

As for the setup for a deck that wants to abuse Simeon/Levi or Zebulun, I’d add Goshen, as Seven Years of Plenty (and the new The Murdering Pharaoh if you are playing Egyptians on defense) will search it out, and Joseph grants CBN and protection from discard to Goshen as well. Just park Joseph in Goshen and hammer away with Simeon/Levi or Zebulun. The new Faith of Sarah and Faith of Isaac help Joseph and his bros get set up quicker, as do the classic Stone Pillar at Bethel and Numerous as the Stars. Rachel, Noah, and The Angel of the Winds all can pull Joseph from deck as well. The new Jacob (Israel) can be used to search or recur his sons, even when Rachel attacks to exchange with Joseph.

Enough about new Genesis stuff. The new Moses… What do you say about him? He could have an entire article dedicated to him, and it probably wouldn’t be complete. He’s still 8/8 and fighting by the numbers in battle. But now he also has White and Green brigades due to his musician-ness and prophet-ness. And he negates characters, enhancements, and Lost Souls (except Cloud cards) in territories. This is huge. TC enhancements won’t work unless they are CBP or CBN. Invoking Terror and Hypocrisy are two fantastic CBP TC EEs to consider pairing with Mo. Negating LS is so good for OT offenses that often don’t have access to the NT or Female LS, although with all the new CoW LS, I’m guessing players are going to start valuing the new LS more than the old “protected” LS.

There are many ways to approach a deck with Moses. I won’t even bother claiming this is a complete list. First, you can simply use the upgraded Moses in a Judges deck. Aaron and Samuel are usually in a Judges deck anyways, and now that Moses has Green brigade and there is an upgraded Green/White David, it’s even easier to splash Green enhancements into this deck.

Second, use Moses in an upgraded version of The Deck. You can do Jacob or Simeon bands with Moses via AUtO. And the new Joshua, with his identifiers allowing him to be searched out via AUtO as well as search for or band to Captain of the Host, just screams to be included in this deck. With all of the “placed enhancement hate” printed on the PC and CoW cards, I can easily see Isaiah and his angels being dropped from The Deck to help make room for CoW cards.

Third, pair Moses with Benaiah and Ezekiel/Babylonians. Mo and Benaiah can abuse the Zeke enhancements and their CBP nature. Invoking Terror and Hypocrisy would fit right into this deck. I’ve long been a fan of the Judges/Ezekiel/Babs/Magicians deck, and while it might need some tweaks with the advent of Coliseum, I still think it can be a top deck.

Fourth, “super Mo” with Moses’ Parents, Melchizedek (CoW), and Samuel (CoW). Use a bunch of CoW Faith enhancements that Moses can play, since he doesn’t prevent them. Each time Moses enters battle, he’s getting protection against the first EE played in battle, searching out a LS, protection from capture and conversion, and discarding an EE or curse. Include AUtO and Angel with the Secret Name so that you can have Moses in battle continually.

That’s all I have for now. Enjoy the combos, I’ll be back for more soon!

One thought on “Cloud of Witnesses Musings – Combos: Part 2”