Win Booster draft, create a card. This was the deal. This was the opportunity. This was the challenge on the floor of the coliseum. Win or die. No tricks, nothing outside of the very authority of God himself to save you from the brawl. Every move has a counter. Every feint a dodge. Three opponents at a time, each vying for the same goal: victory.

An attack! Do you defend now or later? Is the enemy of your enemy going to give you the succor of his unholy documents? Who was it that drafted Mayhem again? The Enhancements, negotiations and time fly, but when the dust settles? There can be only one. One game-winning rescue, and Emperor Anderson is descending from his dais to grant you a reward incomparable to the feeling of battles well fought and honor well earned.

Booster draft has always been a favorite of mine. Where else do you get to see the illustrious Demetrius, backbone of the N.T. Blue offense, square off against some Prominent Women, wondering if that Rod of Iron will be enough to quell their unruliness or if a Massacre of Innocents is lurking just around the corner? The joke is that there are a lot of bad Apostles cards.

Anyway, my idea was to try to bring some of those vibrant battles, with a half-dozen Enhancements or more played and plenty of negating back and forth, back to the T1 scene. Too long have T1 players withered under the scorching sun of offenses with no counter-play. Whether it was FbtN in the first game-changing expansion, Warriors, or later with TGT removing the battle phase entirely, then most recently with high concentrations of CBN Enhancements (hey, at least you got to block before you got destroyed!), usually backed up by the best speed options as well. Players who wanted strategy more nuanced than having the biggest gun were continually left with Johnny-classification decks as the only options.

It is important to note that sometimes–even often–more creative decks have indeed carried players to championships in T1, but the population in the top dozen or so players has always been decidedly meta. That itself is not a problem exactly, but because certain themes had such high concentrations of both speed and CBN power, many players grew tired of facing the same over and over again with very little direct interaction between the players. So I thought, what could I do to help make battles as fun and dynamic as in a Johnnys game in a Spikes game? 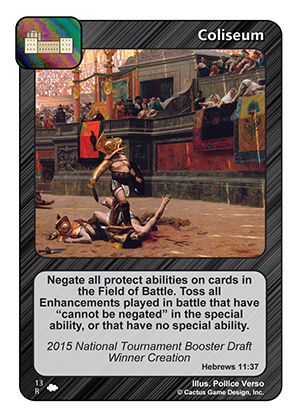 A later article will explain how we got to the final version of this game-changing card from its original conception as a more animal-themed beginnings. In this article, I want to point out just a few of the reasons why I think Coliseum is a good answer to a lot of what has kept the Spike decks so few in number. Coliseum has two very important parts, one to counter the abuse and one to counter the old counters which may otherwise be too powerful when what they were countering got nerfed. The first I will highlight, the counter to the counters, is negation of protection in battle.

There are few more frustrating and less interactive exchanges than:

“I mistakenly rescue with a Hero that doesn’t negate everything.”

There will always be an element of this in all card games. It’s healthy to have some things that have a moderately high cost with moderately low risk that do a moderately disproportionate amount of good for you. The problem comes when Uzzah, Belshazzar’s Banquet, DoU, and similar “chump blocks” make up a significant portion of all blocks a player experiences at a tournament.

I didn’t want to completely eliminate this option. For example, SSS and DoU will work just fine through Coliseum, and are more needed for competetive power levels in pale green and orange than crimson anyway (calling it now, Crimson in the Nats winner’s deck this year).

I think this also has the benefit of making brigades a bit more distinct; the chump blocks in brown, crimson, orange, and pale green are now different in more ways than what happens to the souls and what happens to the blocker. And speaking of multiple brigades, Coliseum gives you a reason to potentially not run the erstwhile best evil Enhancements in the game (Scattered, Abandonment and Balaam’s Disobedience) even when running the appropriate brigades, when we get to the other ability.

On the offensive side of things, the most abusive and non-interactive problems had largely been addressed already. One of the few remaining popular non-interactors was Thaddeus, whose sweeping protection of everything from everything, while not technically CBN, was CBN in practice most of the time. If Coliseum is up, that goes away until you can deal with the N.T. evil Fortress.

Many cards that were not the intended target of this card-based nerf got hit in the crossfire (such as many Heretics…but honestly, do the Romans care? In the Coliseum nobody is safe.

Not the crowd, not the judges, not even people who are just wandering by and catch an errant dropped pewter mug to the cranium. Pronounced dead at the scene, didn’t even have anything to do with the battle raging only a hundred feet away. Just like that, minding his own business on his way to buy a hat. Ironic. This is the flavor of the other, and perhaps more important ability: toss all that noise.

Yes, with a few thematic (and some accidental) exceptions, when Coliseum is up, we get a wonderful view of two Biblical truths. First, that the first shall be last and the last shall be first. Suddenly, the Enhancements most have relied on for years to get them guaranteed rescues galore are instead simply clogging their hands! Second, that God works even through the most violent and evil monuments to man’s sin.

Tossing all Enhancements that are CBN or without a SA implicitly helps offense more than defense, as Heroes and GEs tend to have more toss potential by far than ECs and EEs. There are some (again, often thematic) exceptions such as Pain, but for the most part your ability to still use some CBN battle-winners as a killblow to many characters (even if they’re not involved in the melee!) will come in more on offense than defense.

This reveals a third Biblical truth (don’t you love how Jesus’ premises build on each other?) as described in Luke 12:16-21: you can literally die at any time. Will players spend what time they have in each game storing up CBN Enhancements hoping for that Ship(wreck) to come in before it’s too late? Or will they be willing to plan for the battle phase with interruptable battle-winners and negates to back them up? Whose hand will be clogged more often? This season should tell us the answer.

So in short, what will Coliseum really change about the way decks are built? Will this card go the way of so many attempted counters in the past and simply not end up changing anything? Choosing to ignore the new counters has been a successful strategy for years, will it be any different this time? Well, if that’s the route you want to take, this article is over for you. Thank you for reading, and I hope you’ll stay tuned to Land of Redemption for more articles, which are great!

Now, for those who stayed for the meet & greet, do you care to hear some of my thoughts on what *could* change? For starters, “CBN Battlewinner” need not necessarily equal “MUST INCLUDE.” Purple is still going to want the unaffected Authority of Christ, of course, but many Enhancements that could once justify an entirely offense almost single-handedly now carry the possibility of being a dead or nearly-dead card under a potentially-common circumstance. Furthermore, if you plan to include Coliseum yourself, cards such as Pain suddenly become potentially more attractive. Don’t think of it as a 6/1 with no SA, think of it as a card that says “if Coliseum is in play, decrease a character 0/6. Cannot be interrupted.” How many cards with a conditional, but easy-to-meet CBN battle-winning potential are currently regarded as must-haves?

Ethiopian Treasurer will certainly enjoy being able to snipe every turn with Letters to the Churches. Protection, too, will need a squinting second look to make sure the potential uselessness of the card is outweighed by its benefit. Less obvious deckbuilding decisions are made. Coliseum once again flips on its head the idea that having initiative is better than not. A Roman Emperor with first strike is much, much scarier when he doesn’t have to fear a Dagger in the fat rolls or some judicial proclaimation sending him to an Enhancementless demise.

Under Coliseum, big numbers are stylish again, even on non-FbtN characters! Speaking of that, expect your old favorites TSA, Captain and “8/8 dudes from brigades other than red ironically” to make a roaring comeback now that their greatest enemies (that’s a euphamism for Scattered) are much less formidable.

By the same token, characters that grant CBI/N to Enhancements are much stronger, as they can juice regular old Enhancements into superbeasts that are neither tossed nor negatable. Basically, if you’re running Coliseum and suppose that at least some of your opponents will also be running Coliseum, the number of cards you have to consider for a slot increases drastically as there is more risk/reward dynamic at play. If you plan not to run Coliseum, you will still need to take into acount many will be and maybe, just maybe you’ll swap that Ehud’s Dagger for a more reliable, more negatable battle-winner or negate.

Even then that’s only scratching the surface. Red tossing and banding and negating. Purple reclaiming some of its glory at the top offensive Enhancement slot. Roman tossing. Clay CBN-granting. Philistine banding-with-backup. All sorts of strategies are now just as viable as all sorts of other strategies.

This year will likely see some Regionals roll around befor the meta is even stabalized, and if you’ve been wanting to try out that really cool idea but always felt pressured to play one of the 2 or 3 S-tier decks you see on the internet, this is your year! Not just because of Coliseum, but because at first glance, CoW seems poised to be the next Warriors, the next expansion that completely elevates the game into a new era. Personally, I’ll just be glad to see the battle phase come back. You were frustrating sometimes, and a little unpredictable, but it’s just not the same without you, battle phase. We’re sorry. We miss you. Come home.